When Lady Gaga sat for a recent interview to promote her new perfume, the lines of text printed across her dress may have received more attention than the fragrance itself.

The text was Article 6 of the Peruvian health code, a section that guarantees the right of citizens to make their own choices about contraception. The dress was the work of designer Lucia Cuba — a Peruvian-born artist, activist and provocateur.

“Fashion blogs were talking about women’s health and reproductive rights in Peru,” Cuba told AQ outside New York’s Parsons School of Design, where she teaches fashion and social science. “That’s not a bad thing.”

Her art draws heavily both on her work as a fashion designer and her academic studies in psychology and public health — a multidisciplinary background that helps her challenge students to think about fashion not only as commerce, but as a medium that shapes identity, public perception and social norms.

The dress was part of “Artículo 6,” a project developed by Cuba that used garments, photography and publicity “actions” to advocate for nearly 300,000 women in Peru who, during the rule of former President Alberto Fujimori, were medically sterilized — many without consent.

“Of course everyone wanted justice for those women,” Cuba told AQ. “I couldn’t solve the case … but at least I could ask questions.” 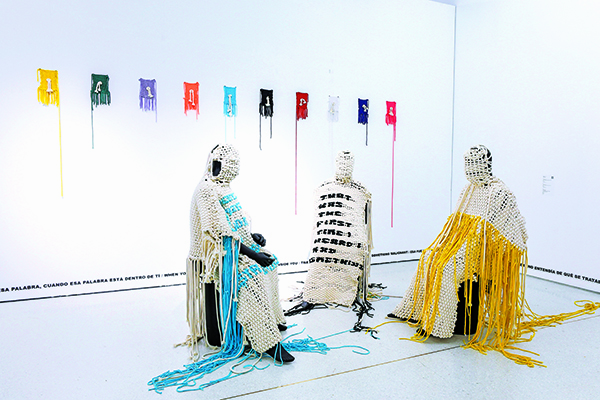 Asking uncomfortable questions is central to Cuba’s art, whether in earlier works on the garment industry or in her latest project, “Exercises on Health,” which deals with access to health care — a hot-button issue both in her native Peru and her adopted home of New York.

“We are exploding in terms of rights and society and political activism,” Cuba said. “It’s a moment when we can reclaim agency on issues and recognize that our voice is being heard.”

A previous version of this article misstated the name of Cuba’s “Exercises on Health.”

Russell is a senior editor of AQ.

Join AQ Top 5 Art Activists Edel Rodriguez and Lucia Cuba for a discussion on art and activism in New York on November 8.