On May 15, Carlos Ramírez, a student activist in Mérida, Venezuela, was picked up by police at an anti-government protest. Forty-eight hours later, he’d been flown to a military base 300 kilometers away, accused of treason, given only one phone call – and 30 minutes to find an attorney before his first hearing.

“It’s very scary,” said his girlfriend, Adelmina D’Ambrosio, who took the call. “He asked me to stay strong.”

Ramírez’s case is just one example of President Nicolás Maduro’s growing reliance on military courts to quell protests amid Venezuela’s economic and political collapse. Some 360 civilians have been taken to military courts since daily street demonstrations picked up steam in April, according to the human rights group Foro Penal. Almost 200 have been imprisoned on charges like treason, attacking military personnel and stealing military weapons – rarely with evidence presented against them. Legal experts say this system is rife with human rights abuses and violations of due process.

After Ramírez’s call, D’Ambrosio scrambled to find him a lawyer in Barquisimeto, where the military base is located. She found two lawyers willing to take the case, but by the time they arrived his hearing had already started, and they were not allowed in. Ramírez was assigned a public defender, who failed to produce any favorable evidence. Instead, a military prosecutor read out a police statement that said Ramírez was yelling anti-government slogans during a protest and inviting people to rebel against Venezuela’s laws. The judge considered this sufficient evidence to imprison Ramírez while charges against him are investigated.

A month later, Ramírez is still in a military prison in Barquisimeto. The interior minister, Nestor Reverol, accused him of being a terrorist on national television. But Ramírez has not had another hearing, has not been allowed to meet with his lawyers and has not been able to see his family, who are worried about his welfare.

“My son has been basically kidnapped,” said his father, Carlos Alfredo Ramírez. 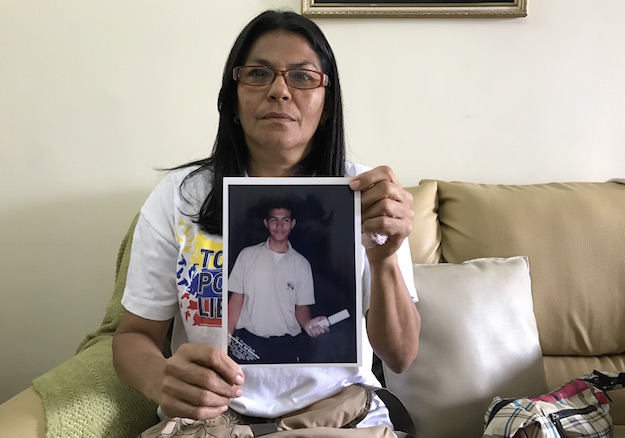 Ramírez’s mother, Alis Flores, holds a picture of her son

“You can’t even get copies of court documents,” said Lilia Camejo, a Caracas lawyer who is currently defending three protestors taken to military courts. “When you look at documents they put you in a room where a soldier is standing next to you.”

Defense Minister Vladimir Padrino has in the past defended the use of military courts as legal when protesters attack soldiers, and explained he was coordinating these cases with Attorney General Luisa Ortega. Ortega, however, told reporters in a May press conference that judging civilians in a military tribunal goes against the country’s constitution. Calls to the Ministry of Defense for further comment were not returned.

Some experts see the greater reliance on military courts as evidence that the government is having trouble keeping its grip on the country’s institutions. The current wave of protests started on March 30, when the Supreme Court stripped the National Assembly of its powers. The following day, Ortega, Venezuela’s chief prosecutor, dissented from the ruling. She has since challenged other government initiatives, like the effort to rewrite the constitution through a constituent assembly.

The schism between Ortega and the federal government has rippled through the justice system, according to Gonzalo Himiob, co-founder of Foro Penal. Public prosecutors were pressing charges against protesters in civil courts at the start of this year’s protests, but not pushing for their imprisonment, Himiob said.

“So what the government did was to start taking protesters to military courts,” he explained.

This has grave consequences for defendants. Lawyers familiar with Venezuela’s military court system say that it operates under different rules than civilian courts, and puts detainees at a clear disadvantage. For a start, the judges are military officers picked by the Ministry of Defense, and so depend on the executive branch for their jobs. The prosecutors tend to be officers of lower military rank than the judges, and are therefore unlikely to feel free to make independent decisions, said Ali Daniels, a legal expert at the Venezuelan NGO Acceso a la Justicia.

Private lawyers are allowed to represent detainees, but they’re often denied access to police depositions, which are the basis for accusations against their clients.  When they can see depositions, they are not allowed to get copies of them.

“It’s a form of intimidation,” Daniels said. “They try to make every step so hard that you eventually want to give up.”

In many cases, the government has done little to present its legal case against demonstrators. In Ramírez’s case, the military judge granted the prosecution 45 more days to find additional evidence. The defense, however, is hamstrung, since they don’t know the exact contents of the testimony they are challenging. The declaration read at Ramírez’s hearing has not been made public or available to his lawyers, said Pedro Troconez, one of the lawyers from Barquisimeto, who later filed a complaint to be allowed onto Ramírez’s case.

“It was a ridiculous decision,” Troconez said. “To imprison someone you need to have multiple pieces of evidence … not just a police declaration.”

With the odds stacked against activists who are taken to military courts, few families have been willing to speak out about what has happened to their relatives, fearing retribution. But Ramírez’s parents and lawyers hope that by talking about his case they can keep the issue of political prisoners on the public agenda.

While Venezuela’s opposition tries to keep up pressure on the streets and bring about elections, Ramírez’s defense is trying to do what is possible within the constraints of the military tribunal, Troconez said.  He expects Ramírez will be brought to a second hearing, formally charged with treason, and then face another seven or eight months in jail as he awaits trial. But the defense will persist, he said.

“These courts have demonstrated time and again that they are not neutral,” he said. “But we go through the legal procedures anyways, so that later we can take cases like this to international tribunals.” 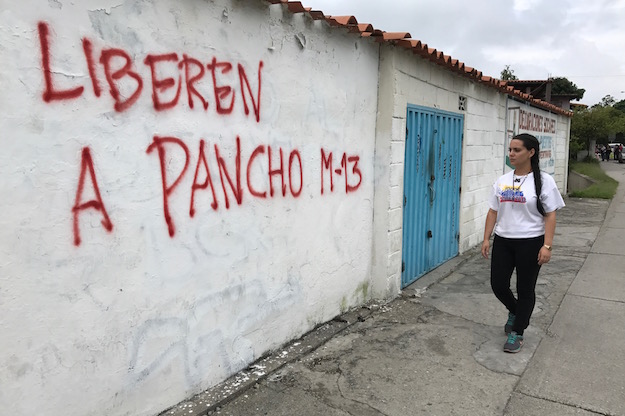 Meanwhile, Ramírez’s family is trying to cope with their son’s imprisonment. His mother, Alis Flores, quit her job as a merchant in a nearby city to be closer to the family and help with her son’s defense. Ramírez’s girlfriend, D’Ambrosio, travels between Mérida and Barquisimeto to meet with lawyers and file petitions at military courts in both cities.

They have the support of the local university community, and that helps, said Flores. Ramírez’s imprisonment is a well-known cause in Mérida, and students from the University of Los Andes often bear signs demanding his freedom in anti-government marches. Members of his university movement, known as Movimiento 13, have sprayed city walls with red graffiti demanding Ramírez’s liberation.

“When you see that, it makes you realize you are not alone,” said Flores. “I used to warn him about getting involved in politics, but now I understand my son’s struggle. We are here to back him up and make him proud.”

Rueda is a journalist based in Bogotá, Colombia, who has been covering Latin America since 2008.

Viana is an independent journalist based in Brazil.

This story was produced  in collaboration with Agencia Publica, Brazil


Tags: Nicolás Maduro, Venezuela
Like what you've read? Subscribe to AQ for more.
Any opinions expressed in this piece do not necessarily reflect those of Americas Quarterly or its publishers.