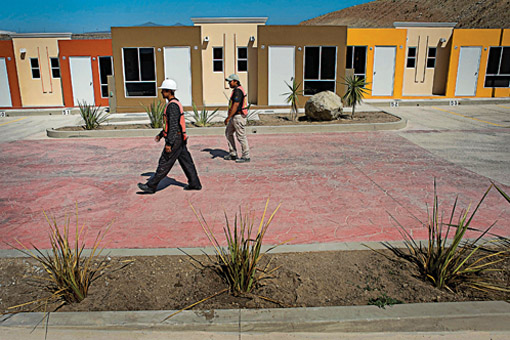 Owning a home remains a distant dream for many city dwellers in Latin America and the Caribbean. Some two-thirds of households in cities like Caracas, La Paz, Lima, Santo Domingo, Buenos Aires, San Pedro Sula, and Managua have insufficient capital to purchase a house. In a region whose urban population is expected to exceed 680 million by 2050—the largest of all developing regions in the world1—the challenge of finding affordable housing is complicated by the need to avoid further strains on the environment.

A few countries, however, have taken the lead in creating affordable—and “green”—housing stock. In Mexico, the Comisión Nacional de Vivienda (National Housing Commission—CONAVI) launched a large-scale program in early 2007 to build sustainable low-income housing developments that use ecological materials and are constructed using a minimum of water and energy, while also providing access to financing for low-income residents. Between 2007 and 2012, the government aimed to provide 6 million housing credits to contractors, 20 percent of them for sustainable housing.

In addition, CONAVI and the Instituto del Fondo Nacional de la Vivienda para los Trabajadores (Institute of the National Housing Fund for Workers—INFONAVIT), the country’s principal mortgage provider, launched the Hipoteca Verde (Green Mortgage) program in 2007, which provides a mortgage credit of up to $1,250 to homeowners who install eco-technologies such as energy-efficient lighting, solar water heaters, separated solid waste containers, and energy-efficient gas water heaters. More than 3 million people have benefited from the program and over 900,000 credits were distributed between 2007 and August 2012.2

Meanwhile, in Argentina, the Ministry of Environment and Sustainable Development and the Vice-Ministry of Urban Development and Housing incorporated energy efficiency standards into a public housing program for Buenos Aires—the third-most populated urban center in Latin America—where shortages and low-quality housing infrastructure combined with a growing carbon footprint. In partnership with the Inter-American Development Bank (IDB), Argentina also created a framework for developing green public facilities, such as community and educational centers and recreational space, powered by renewable energy sources.

The two countries’ green housing initiatives are starting to pay off. According to the 2009 G20 Low Carbon Competitiveness report, commissioned by the European nonprofit E3G and the Climate Institute, Mexico and Argentina are on track to improve carbon productivity—the amount of GDP produced per unit of carbon equivalents emitted—at rates that will ensure that global emissions peak by 20203, far ahead of the rest of the region.

Private investment is still crucial. Latin America and the Caribbean will require an investment of at least $310 billion (7.8 percent of the region’s GDP) to narrow the current housing gap. “There is tremendous demand for formal and affordable dwellings aimed at the base of the pyramid, a sector that has been underserved by the current housing market and government programs,” says IDB economist César Bouillon. But developing affordable housing that also relieves pressure on the environment may turn out to be an attractive way to lure reluctant investors into the market.

If governments enable more people to achieve homeownership, then it’s a win-win for all: the new taxes from homeowners will support the state’s ability to invest in more green initiatives.