Seven months seems like an eternity in Brazil’s wild 2018 election, which appears to shift ground every few days – sometimes hours. Last October, I described three potential paths to the presidency, and those paths remain intact, even if some of the candidates have changed and the day-to-day race remains highly unpredictable.

Here is an update on where the race stands:

The jailing last month of former President Luiz Inácio Lula da Silva suggests that his chances of gaining eligibility to run are slim. Remarkably, he still leads the field of candidates in recent polls, implying that some portion of the electorate believes his narrative that his jailing is part of a conspiracy of the center-right, media and other forces to prevent him from running. Nonetheless, his legal troubles, not to mention the country’s Ficha Limpa law (which prohibits candidates who have been convicted of a crime from running) likely rules him out, even if he is freed prior to the deadline for candidates to be named; Aug. 15 is the deadline for candidates to be registered.

With Lula most likely out, the leftist grouping becomes unclear. Lula’s party, the Workers’ Party (PT), must decide whether to field its own candidate. While one in five Brazilian voters identify with the PT, there are no obvious names to inherit the mantle of party leadership from Lula. Two names that have been mentioned are former Bahia Governor Jacques Wagner and former São Paulo Mayor Fernando Haddad. However, neither is showing much support in recent polls, which may push the PT to refrain from fielding its own candidate and instead throw its weight behind another name from the left.

The name on the left with the most momentum is Ciro Gomes of the PDT party. Gomes is breaking double digits in national polls, and should be seen as the greatest beneficiary of Lula’s legal troubles, as his name is prominent on the national scale. If the PT doesn’t field its own candidate, some portion of Lula’s support could end up with Gomes. Furthermore, there has been some noise about a potential alliance between the PDT and PT at the national level, which would give Gomes vital TV time.

Financial markets will keep a close eye on Gomes’ momentum in the polls. If he looks more likely to enter the second round, financial assets will suffer, as markets have become more positive on the electoral outcome since Lula’s legal troubles increased.

Luciano Huck and Joaquim Barbosa presumably fit into this category, but both have declared they will not be candidates in October. Political analysts viewed both as having important upside potential because both were considered outsiders, and thus not involved in the Car Wash scandal, and tainted by corruption. Barbosa, due to his role as head of the Supreme Court during the mensalão vote-buying scandal, fit nicely into the group of voters that prioritized a law and order candidate. Since both Huck and Barbosa appear to be out of the running, the race is lacking in non-politicians – at a time where Brazilians highly reject the political class.

Geraldo Alckmin (PSDB party), the former Governor of São Paulo, should in theory be dominating the centrist moderate path, given the resources of his party, his high name recognition as a former presidential finalist in 2006, and his stature within the country’s most populous state. But he has yet to gather momentum, and continues to lag in the polls, stuck at around 8 percent (or even lower in one recent poll, which gave him just 5 percent support). It will be interesting to see if he eventually benefits from the withdrawal of Barbosa, who had reached double digits in a recent national poll. The Car Wash scandal has hit Alckmin’s PSDB hard and in an environment where the population is looking for new names, Alckmin could have a hard time gaining steam. There has been some chatter about a potential alliance with President Michel Temer’s MDB. But it is uncertain that Alckmin would want to associate with a very unpopular president and a party that is very much tainted by the corruption scandals.

Other names in this category include Alvaro Dias of the Podemos party. A former Governor of Paraná – the heart of the Car Wash investigations – Dias is not tainted by scandal but lacks national name recognition. He has garmered mid-single digits support but could have upside if the centrist camp moves away from Alckmin. Marina Silva stands somewhere between the centrist and leftist camp, backing an environment-focused platform. She ran well in the 2010 and 2014 elections, but lacks the party infrastructure at the moment to be considered a favorite. That said, she could also benefit from Barbosa’s exit, especially given that both escaped poverty to become national figures.

Other names such as Henrique Meirelles, the former finance minister, and Rodrigo Maia, speaker of the house, have polled just 1-2 percent in national polls. Meirelles, now associated with the president’s MDB party, would have a hard time overcoming the unpopularity of Temer. He has been seen as a potential running mate for Alckmin.

Markets remain optimistic that a name from this camp will emerge victorious despite polls suggesting otherwise. But given that a larger percentage of Brazilians likely identify with centrist policies, if a candidate can consolidate this group, he or she would have a good shot at emerging victorious.

Jair Bolsonaro has been running steady in national polls, at around 20 percent. This suggests he has a strong core of voters who are not going to flee him, regardless of the politically incorrect comments he utters. He captures some portion of the electorate looking for change, even though he is a life-long politician.

Additionally, while the left and center-moderate groupings have less defined candidates, Bolsonaro essentially occupies the far-right spectrum all to himself.

Markets have also become a bit more sanguine about the possibility of Bolsonaro qualifying for the second round, as he has enlisted the support of a well-respected economist to communicate more market-friendly ideas.

That said, Bolsonaro is somewhat of a loose cannon, and markets remain a bit unsure about some of his personal views when it comes to economics. For example he has not been an advocate of pension reform, which is vital to stabilize the country’s fiscal situation.

There will be more twists and turns in the weeks to come. At this point, markets expect Bolsonaro to advance to the second round, with either Gomes from the left or a centrist as his opponent. A Bolsonaro–Gomes matchup signifies substantial volatility in financial markets. Investors would be much more comfortable with Bolsonaro–Alckmin, with the latter expected to attract some voters on the leftist spectrum given fears of Bolsonaro, while at the same time consolidating the vast center.

Correction: A previous version of this article misidentified the birthplaces of Joaquim Barbosa and Marina Silva. They are from Minas Gerais and Acre, respectively.

Rosen has 20 years of experience in the Latin America financial markets, at both leading investment banks such as Goldman Sachs, and asset managers including Trust Company of the West. He has lived and worked in both Argentina and Brazil. 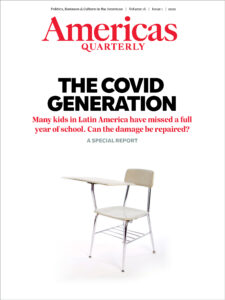 Latin American schools were closed during the pandemic for longer than any other region. Now the future of a generation depends on whether countries can get past educational setbacks.