Other countries that are non-traditional external actors in Latin America are also stepping up their engagement. Iranian President Mahmoud Ahmadinejad has visited the region twice this year, and Russia is looking to broaden political and economic ties with the region.1 Latin American leaders, for their part, also have visited in recent months not only the United States but several countries that are outside of the traditional network of international contacts for the region.

But what is the reaction of the public across the hemisphere? Are outside powers trusted by the people? And, how much influence are they perceived to have today and in the future? Answers to these questions may have significant implications for the success of efforts to broaden diplomatic and economic relations within the Latin American and Caribbean region.

Data from LAPOP’s 2012 AmericasBarometer regional survey of public opinion helps to answer these questions. The study, which is based on over 40,000 interviews across 26 countries, measures a variety of public perceptions, including trust in non-Latin American countries and their perceived influence in global affairs.

According to the survey, average trust in the United States is significantly higher than trust in Iran and Russia, and marginally higher than trust in China. Figure 1 shows 24 Latin American and Caribbean countries’ average level of trust in Iran, Russia, China and the United States on a 0–100 scale, with a higher score signifying greater trust.2 For each country, respondents rated whether they considered the government in question “very trustworthy, somewhat trustworthy, not very trustworthy, or not at all trustworthy” or had “no opinion.” Overall, many respondents selected no opinion, in particular with regard to Iran and Russia. 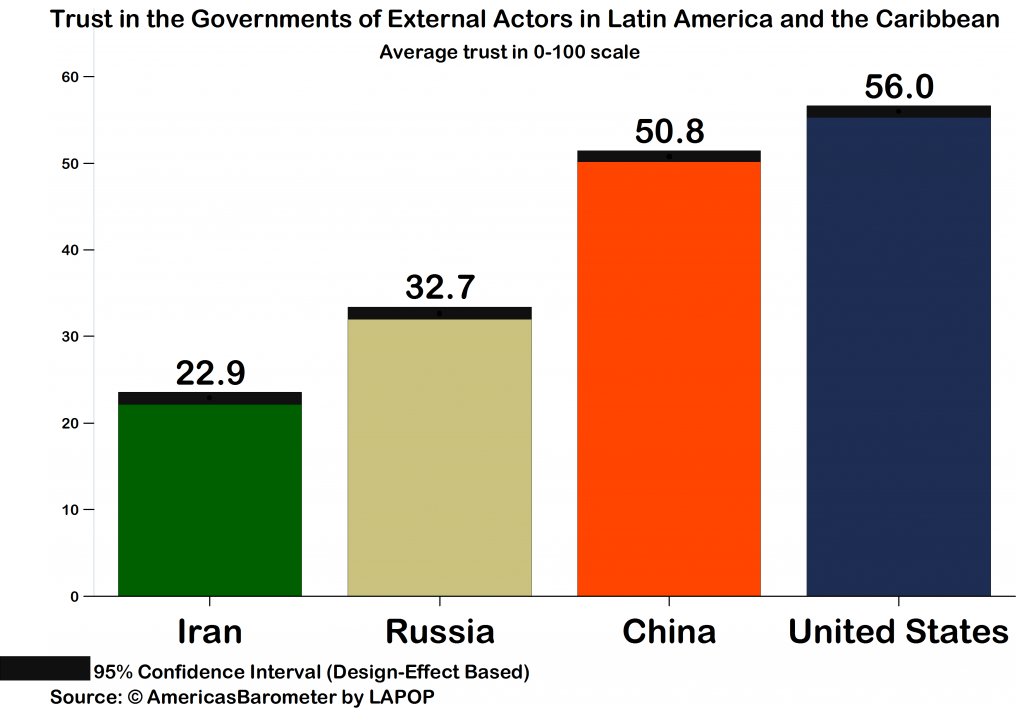 Of course, average levels of trust vary across the region. Looking at the level of trust in China and the United States, it is clear that public perceptions vary in the countries that belong to different regional subgroups: Central American Integration System (SICA), Caribbean Community (CARICOM), Alliance of the Pacific, Bolivarian Alliance for the Americas (ALBA), and Mercosur.  Figure 2 shows that opinions of the United States are comparatively more favorable in the Central American and Caribbean groupings. Levels of trust in China are comparatively high among the left-leaning ALBA grouping.3

Figure 2: Trust in U.S. and China by Regional Sub-Group 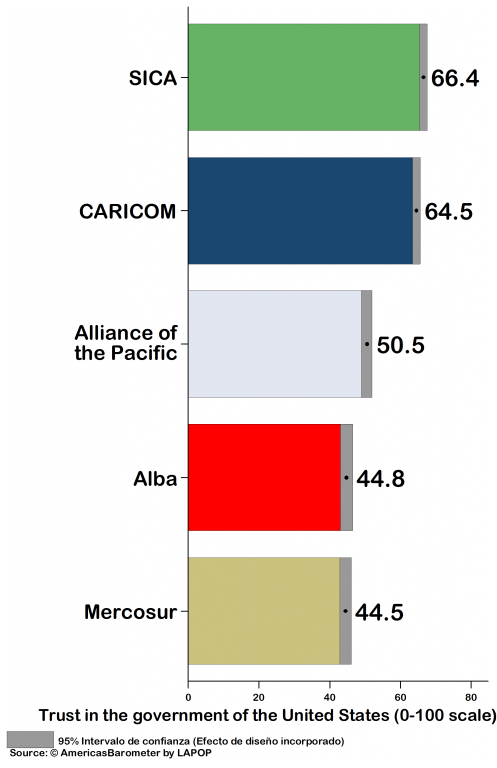 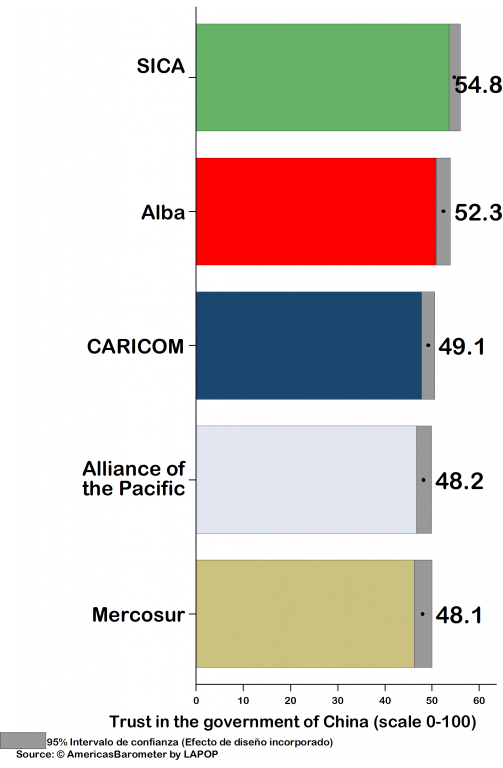 The U.S. profile in the region remains comparatively strong in general, particularly among countries geographically close to the United States. But what is the Latin American public’s expectation of future U.S. influence?

Figure 3 presents, on the left, responses to a question asking which country currently has the most influence in the region. Forty percent selected the United States. But the right of the figure shows that only 30 percent of respondents believe the U.S. will be the dominant power in the future. Interestingly, the difference in response rates in regard to China’s current and future influence is only marginal (3.5 percentage points), which indicates that important segments of the public perceive other Latin American countries (e.g., Brazil) and non-Latin American countries (e.g., Japan) as likely contenders for key influence in the future.

Figure 3: Future Influence in the Region 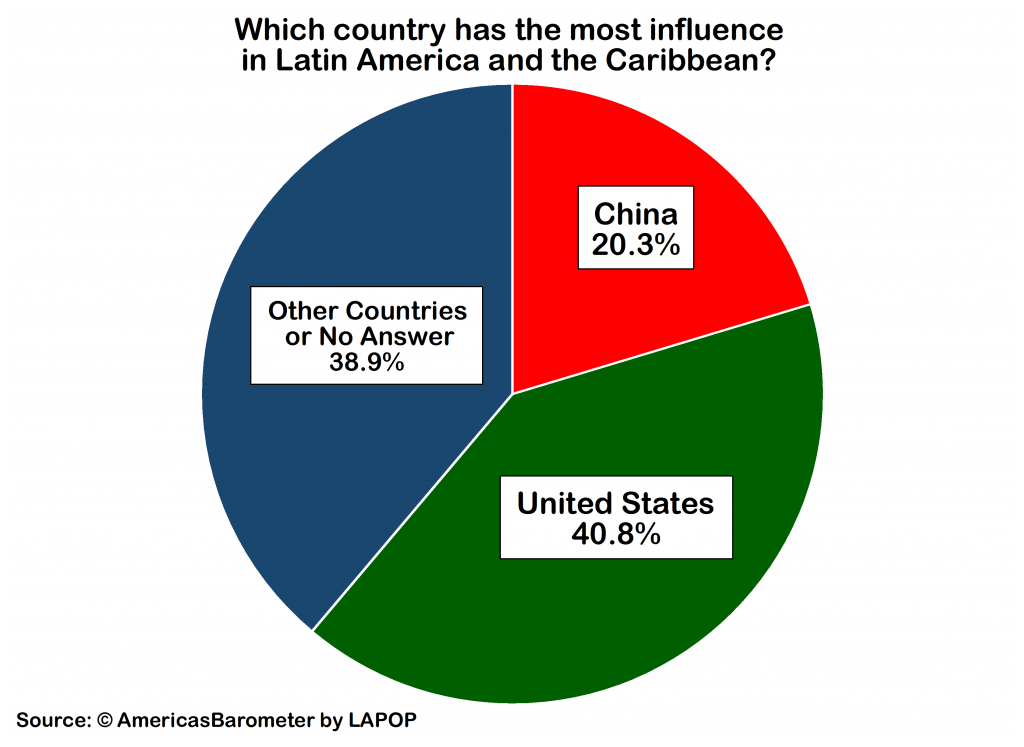 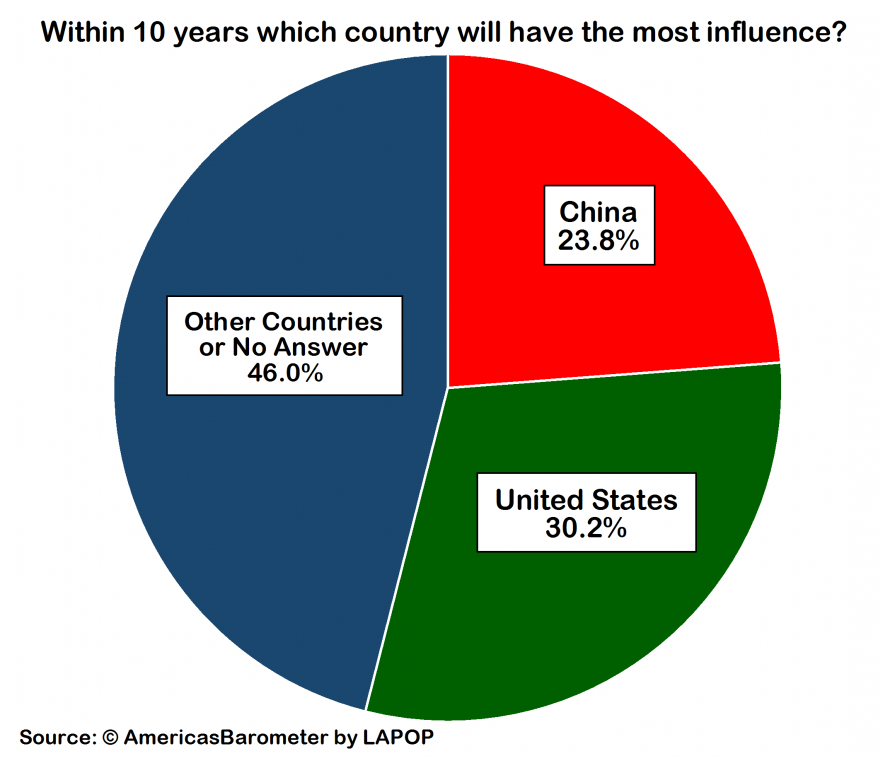 The survey also examined which country should be a model for future development. Once again, more respondents selected the United States (27.5 percent) than China (16.3 percent).  Figure 4 highlights the response based on whether the interview was conducted in a country that belongs to the ALBA (red) or the Alliance of the Pacific (blue) groupings. There is not a clear difference between the two regional blocs in terms of their preference for the U.S. or Chinese models for development (or for any other option, not presented here). However, Venezuelans in 2012 were more inclined to favor the Chinese model than they were inclined to favor the U.S. model of development.

Overall, these public opinion analyses show that the United States retains an advantage, for the region as a whole, when it comes to levels of trust and other attitudes. At the same time, there is evidence that the public’s trust in China is close to rivaling levels of trust in the U.S. and that the public perceives U.S. influence as on the decline. When it comes to models of development, there is a tendency for the public to select the U.S. over China (except for the case of Venezuela) but, notably, even more individuals in the survey selected a different response, indicating preferences in the region toward allying with other powers or following domestic models of development.

The United States, China, and other outside actors are likely to continue to compete for influence in the region, and public opinion toward these countries is likely to shift over time. However, in a region in which many are wary of the influence of extra-regional powerhouses, continued support is likely to be found for actors and models that represent alternative and more uniquely Latin American or Caribbean paths forward. 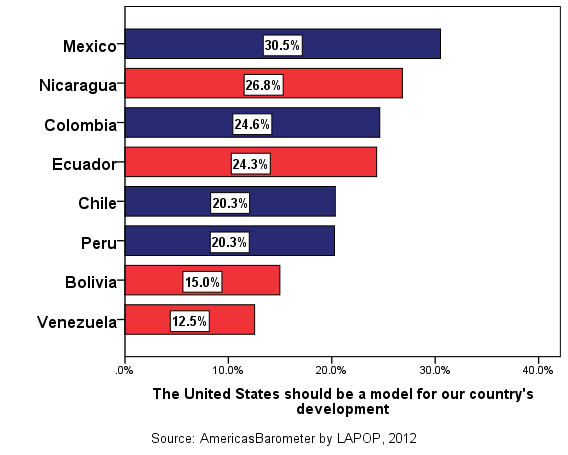 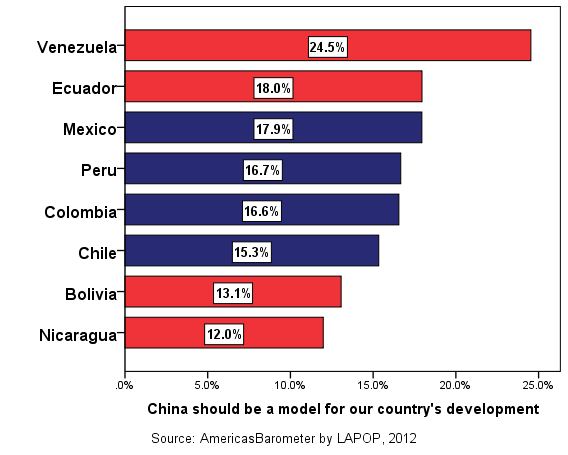 2The 24 countries surveyed are: Mexico, Guatemala, El Salvador, Honduras, Nicaragua, Costa Rica, Panama, Colombia, Brazil, Paraguay, Venezuela, Peru, Ecuador, Bolivia, Argentina, Chile, Uruguay,  the Dominican Republic, Haiti, Jamaica, Guyana, Belize, Trinidad and Tobago and Suriname. To avoid overlapping countries, we counted Venezuela and Nicaragua only as members of ALBA. The results for SICA are largely the same with or without Nicaragua. In the case of Mercosur, trust in China increases slightly and trust in the government of the United States decreases when Venezuela is counted as part of Mercosur: specifically, trust in China increases to 51.0 (from 48.1) and trust in the U.S. decreases to 42.7 (from 44.5). Note that all analyses in this report weight each country equally.

3 It is important to note that, except for Costa Rica, the countries that belong to SICA are among the few countries in the world that still maintain relations with Taiwan instead of mainland China. In the questionnaire, it was specified that the questions were about mainland China, but there may still exist a degree of confusion among the public, since in those countries, Taiwan is often referred to as China, particularly among respondents with lower levels of education who are not aware of the difference.


Tags: Asia-Latin America, U.S.-Latin Amerian Relations
Like what you've read? Subscribe to AQ for more.
Any opinions expressed in this piece do not necessarily reflect those of Americas Quarterly or its publishers.