Lloró, Colombia – As FARC guerrillas began resettling in demobilization zones throughout Colombia earlier this year, Ciro Cunambia and his family were adjusting to a relocation of their own.

In March, Cunambia fled shootouts and rumors that his rural village in the Pacific department of Chocó would be “turned to dust.” After a two-hour boat ride downriver, he finally arrived with his wife and four children in the small town of Lloró.

Months later, and still fearful of returning home as rival criminal and guerrilla groups vie for control of this impoverished patch of Colombia, Cunambia finds it hard to share any enthusiasm for the end of the country’s 54-year war with the FARC.

“I don’t understand. The more we hear about that peace process, the more this zone heats up,” he said.

Though the FARC began demobilizing in February, other armed groups continue to operate in much of the country, adding thousands to the rolls of the internally displaced even as Colombia’s longest-running war has officially come to an end.

In 2016, according to the Global Report on Internal Displacement (GRID), over 170,000 people were displaced across Colombia. This year may be even worse: group displacements through the first six months of 2017 were up 20 percent, according to the Norwegian Refugee Council.

The scale of the problem highlights the amorphous face of armed conflict in Colombia. Clashes between two armed groups, the Gulf Clan and the Gaitanista Self-Defense Forces of Colombia, ultimately drove Cunambia and his neighbors from their homes. But there are dozens of criminal bands and guerrilla groups now fighting for control of drug trafficking and other illegal trades throughout the country. Concern is growing that many will expand their already sizable operations by taking control of places the FARC has left behind.

That fear is particularly acute here in Chocó, a largely impoverished Afro-Colombian region with swathes of uninhabited jungle and easy access to the Pacific, a lucrative piece of land for illegal trades. Cities and towns in Chocó see some of the highest rates of forced displacement in the country.

According to José Miguel Vivanco, Americas director for Human Rights Watch, some communities in the region are “left to their own devices” when it comes to getting help from the government.

“Unless the authorities protect them, the promise of peace in Colombia will continue to be only an abstract idea for these vulnerable communities in Chocó,” said Vivanco in a recent report from the advocacy group.

The steps that Colombia’s government has taken to help people like Cunambia have been limited. Army Colonel Javier Pacheco, who deployed additional troops to the region in the wake of rising violence, told AQ that the people there are “crying out for permanent presence of the army.” He said government forces would accompany the displaced back to their communities, and continue to patrol the region for as long as necessary.

Cunambia, for one, is skeptical.

“They offer us ‘security’ for a few months, but are they really going to stay with us?” he asked in frustration. “How long for?”

Cunambia’s wariness is understandable. The first time he considered fleeing his village was about a year ago, after clashes between the Army and members of Colombia’s second largest rebel group, the National Liberation Army (ELN), brought violence to his doorstep.

“I was lying down at home and the kids were playing outside when I heard the plomeo,” he said using a word to describe the loud gunshots. “It lasted a long time, at least ten minutes.”

When the shooting was over, he found his then 7-year-old son, Yarleison, lying on the ground, wounded in the back.

Cunambia said the army airlifted the boy for immediate medical attention and that they helped his family during the emergency, but that he has not seen any compensation or assistance since. 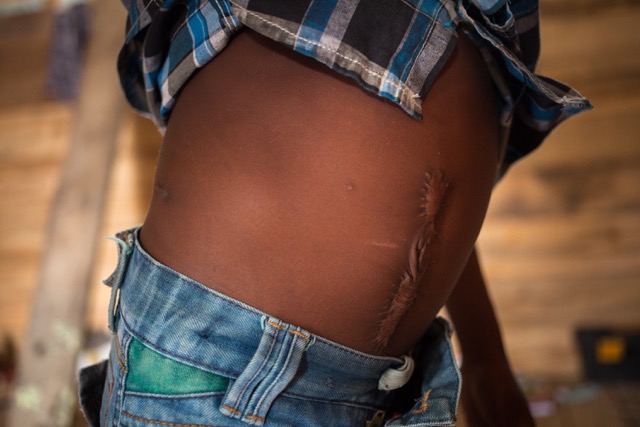 Yarleison shows the scar on his stomach, the result of a gunshot wound

Yarleison survived, but the now 8-year-old feels constantly weak and feverish, and complains of strong abdominal pains as a result of the gunshot.

Upon arriving in Lloró, Cunambia’s family and others who fled violence in the region received humanitarian assistance and were hosted at a nursing home on the outskirts of town. But poor living conditions pushed many to look for other housing options, including Cunambia. His family has been receiving some support and basic goods from the local government and international organizations, but Cunambia says it is not enough.

His daughters, aged 4 and 6, have skin sores due to malnourishment. Their treatment, along with the costs of his son’s recovery, means medical expenses that Cunambia cannot afford (each bottle of medicine for his daughters costs around $10, he says).

Cunambia searches daily for the few jobs at the river port unloading wood and other goods, but his family struggles to make ends meet. Even so, he believes it is still too unsafe to return to his village.

“We are not even sure who they are,” he said referring to the various illegal groups now operating in the region. “But those people do whatever they want with us … we won’t go back.”

Piñeros is a freelance journalist and photographer based in Colombia.