The new found momentum for allowing homosexuals to openly serve in the U.S. military springs from attitudinal changes that have taken place since the “don’t ask don’t tell” policy of 17 years ago.  If only this type of generational change were occurring south of our own borders.  Recent surveys demonstrate that levels of political tolerance of gay rights in Latin America have changed little across generations.

The most basic measure of tolerance is that of citizens to accept the right of a citizen (in this case a homosexual) to run for political office.   Sadly, even by this basic measure of tolerance, younger generations in Latin America are only marginally more supportive of political gay rights, especially in the most notoriously intolerant environments for homosexuals, Jamaica and Haiti. 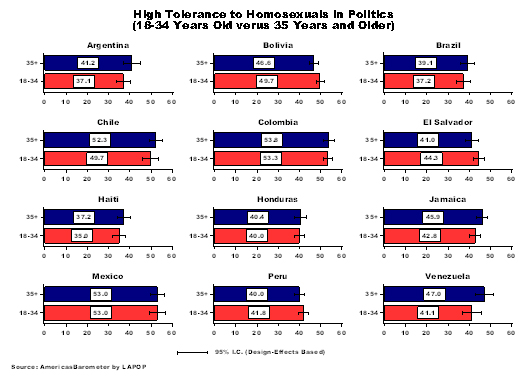 Unfortunately these sad trends look unlikely to change.  The greatest predictor of tolerance toward the political rights of gays in Latin America–as throughout the world–is education.  But educational levels are slowly rising throughout the Americas south of the Rio Grande.

Mitchell Seligson is Centennial Professor of Political Science at Vanderbilt University and director of the Latin American Public Opinion Project that conducted these surveys.

Christopher Sabatini is the former editor-in-chief of Americas Quarterly and former senior director of policy at the Americas Society and Council of the Americas. His Twitter account is @ChrisSabatini