Sabrina takes her place on stage. Under strings of decorative Christmas lights, with a broad grin and rounded cheeks, she looks younger than her 19 years. But as she starts to perform, her voice picks up the staccato rhythm of rap to spin a very grown-up tale: of a young woman killed by her own boyfriend in Alemão, a favela in Rio de Janeiro’s north side.

By the end of her short recital, the slender black teenager is leading the crowd in verbal jabs against sexism, against police violence in the favela, against racism: Basta, she chants, enough.

More: Young women like Sabrina build communities, with or without the government.

Off stage, mingling with the hip young people drawn to the cultural evening in Rio’s posh south side, Sabrina is all smiles again, her hands flying as she talks, enthusiasm overflowing — a teenager once more. She was one of the organizers of that night’s event, and of many others like it; she’s clearly at ease in the diverse crowd that includes young people from Alemão, where she lives, but also more affluent cariocas.

Despite the hard stories she tells, being from a favela, one of the poor neighborhoods that drape Rio’s hills and fringe its outskirts, “is reason for pride,” Sabrina said. “Everyone helps everyone else. It’s a way of life.”

In her blue braids and bright yellow T-shirt that says, in Portuguese, “My name is favela,” it’s clear Sabrina has that pride, and more: She has spun her love for words and for her community into a budding career as a communicator and a cultural producer. A natural on social media, she’s uploaded her spoken word pieces to Facebook, where followers know her as MC Martina. Free community courses in documentary production and website design gave her the tools to tell stories on other platforms, and she recently won a government grant to produce a short film about the neighborhood. It’ll be shot and distributed entirely on cell phones so it’s more accessible, she said. By scraping together resources and applying herself, Sabrina has done much to build the future she wants. But she’ll need more than focus and free courses to make it beyond cultural events and Facebook posts. The racism, the violence, the inequality she denounces in her poems — they’re her reality too. They threaten to push goals that are difficult just out of reach, and make every day an exercise in dodging and making do. 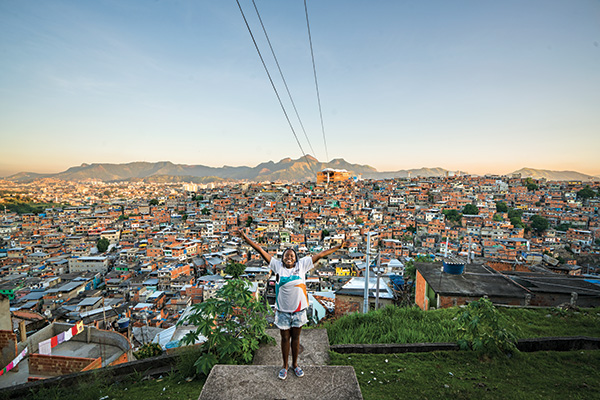 Alemão is one of the most dangerous areas of a city that has devolved into greater violence since the 2016 Olympics ended, and the world looked away. Shoot-outs between police and gang members are routine; they shut down classes for days and keep residents locked indoors. When Sabrina’s mother worried that walking to the website design class took her daughter past gang members and police, Sabrina agreed to a 45-minute detour. On the day she won the grant to make her documentary, she’d been tense, worried about a clash between government officials and favela residents.

More: Rio’s Complexo do Alemão and the failures of the “war on crime.”

There are also routine acts of exclusion. She knows her white friends get more calls back than she does when they apply for the same jobs, especially when she shows up with her long, braided hair. She knows hip-hop circles — like the website design classes — are largely boys’ clubs. She goes anyway. At home, she’s expected to keep house for the family as well as help with the bills. Her mother works all day as a school janitor. Her stepfather and brother don’t do household chores. Sabrina doesn’t argue. She does the work. Then she raps about it — and plans a different life.

More: The skills young people need to succeed are too costly. Here’s a solution.

The way out and into the career she wants is through college— and the way into college is through the ENEM, Brazil’s stringent public university entrance exam. Those who can, pay for prep courses and private tutors. Sabrina studies by herself at night, after doing the dishes. She’s failed it twice, but she’s persistent.

Dominguez is a journalist based in Brazil

Alemão was considered to be the headquarters of one of Rio’s main criminal factions; as a result, it was occupied by the army and police forces in 2010. The government tried to introduce a new security program in the area, but without proper planning or resources, security forces never fully recovered territorial control or won the support of residents. Today, Alemão represents the model of the “war on crime” more than ever. Police officers and residents are dying in frequent confrontations. In the state of Rio de Janeiro, 920 people were killed in confrontations with police in 2016, an increase of more than 100 percent when compared to just three years ago, when there were 416 victims. This is the environment Sabrina must navigate every day.

— Ignacio Cano, coordinator of the Laboratório de Análise da Violência, and professor at the State University of Rio de Janeiro

Over 120 years, Rio authorities let favelas grow without land titles or investment. This official policy of neglect kept in place the segregated structure of a slaveholding society and fed the stigma that justified keeping these neighborhoods precarious and underserved. People like Sabrina are shifting that reality from the ground up. Alemão has dozens of innovative community-based organizations; Rio’s favelas naturally boast qualities city planners are working to incorporate into cities. The way of life and love of community Sabrina manifests are a natural engine and consequence of these qualities. Residents like her are building their future — even though Afro-Brazilians are more likely to be killed by police or incarcerated, and earn 58 percent of what whites earn. More must be done to support favela communities and their people.

Many young people in Latin America think college is key. The issue? Universities are expensive and many don’t guarantee a job. Even public institutions require students to spend time and money on admission exams, then take years to form them while the market changes fast. This widens the skills gap, leaving jobs open and young people without adequate training and without employment. One in four 15- to 24-year-olds in Latin America and the Caribbean are neither studying nor working; three in four of those working are in the informal sector, according to the International Labor Organization. We need training programs that provide skills required by employers. This can be done in a short time, for a small investment, making the educational experience more relevant to students like Sabrina, while offering their talent faster to companies.

Growing internet and social media access has changed the way young Brazilians live and interact with one another. Millennials in the country now spend an average of four hours per day on the internet. For those living in favelas or outside major cities, this means a newfound ability to express themselves and draw attention to the social issues that are most important to them. Afro-Brazilian women like Sabrina have an especially important part to play. The challenge now is for young people like her to move from simply using technology to creating it, so that they are not just producing content, but helping build platforms for their messages as well. For that to happen, Brazil should invest more in affirmative action programs that foster diversity in the tech sector.

—Silvana Bahia, director of programming at Olabi, and Pretalab coordinator