The six sports stars featured in this section have taken up a myriad of social causes through their foundations and charitable activities. Their work ranges from providing health and education to children in the slums of the Dominican Republic (Albert Pujols) to promoting women’s rights as a UNDP Goodwill Ambassador (Marta Vieira).

More than a charitable act, these individuals feel a responsibility to promote the causes to which they are personally tied. And while they often aren’t recognized for these efforts, they devote the same intensity and passion to their causes that they apply to the field of play.

The following profiles of athletes and their foundations show that in a region where sports are king, star athletes can (and should) be advocates for positive change.

“As one of four female [UN Goodwill] Ambassadors, I’m here to help fight poverty and support women’s rights through sports.” 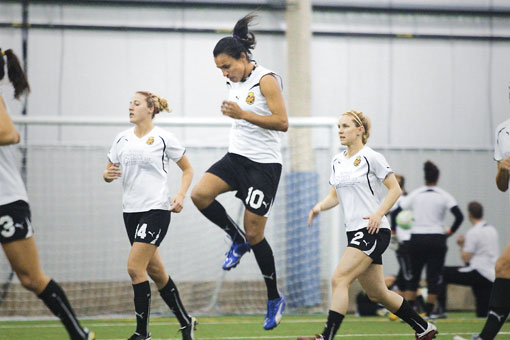 She has won the FIFA Female World Player of the Year award for the past five years and was the Most Valuable Player of Women’s Professional Soccer in 2009 and 2010.

Standing a modest five feet, four inches tall with a carefree demeanor, Brazilian soccer phenom Marta Vieira da Silva (Marta) doesn’t look all that threatening. But get her on the soccer field with a ball at her feet and she will be happy to show you how she earned the nickname “the female Pelé.” Compatriot and fellow soccer star Edson Arante do Nascimento (Pelé), who also wore jersey number 10, agreed with the comparison, but added that Marta has prettier legs.

Known for her blistering speed and uncanny ability to find the back of the net, the 25-year-old Brazilian native is now indisputably the best female soccer player in the world and has no intention of passing the torch any time soon. She began her international career in Sweden, where she scored 111 goals in 103 games for Umea IK, before coming to the U.S. to play for the Women’s Professional Soccer (WPS) league. This year she signed with the Western New York Flash in Buffalo, NY.

On the international level, Marta led Brazil to the finals of the 2007 Women’s World Cup and was the tournament’s top scorer. All eyes were on Marta again during this summer’s World Cup to see if she would repeat.

In November 2010, the United Nations Development Programme chose Marta to become a Goodwill Ambassador, one of the international body’s high-profile spokespersons tasked with promoting the Millennium Development Goals. According to Marta, the Ambassadors are “international role models who can support social causes on a global stage.”

Having grown up in the rural town of Dois Riachos in Brazil’s northeastern Algoas state, Marta is no stranger to poverty. Since becoming an Ambassador, she has tried to raise awareness of poverty and inequality, especially in her home country.

As one of the world’s most successful female athletes, and one of four female Goodwill Ambassadors, Marta is also a proud spokesperson for women’s sports as a form of empowerment. “The world is now accepting the idea of women’s soccer much more easily,” says Marta.