At first, Luis Lara Armendáriz thought the explosion of violence in his home state of Chihuahua, Mexico, was like any other problem he might face in business.

“Not safe” is an understatement. In sheer lives lost, no place has paid a heavier price for Mexico’s failed war on drugs than Chihuahua, a mostly desert expanse of mesas, canyons and chamiza shrubs on the border with Texas and New Mexico. In 2006, when then-President Felipe Calderón called on the military to break Mexico’s drug cartels, the statewide murder rate was around 20 per 100,000. Two years later, it was over 75. Ciudad Juárez, Chihuahua’s largest city, soon became the world’s deadliest, with a rate of around 280 per 100,000 — twice that of Caracas, Venezuela, today. 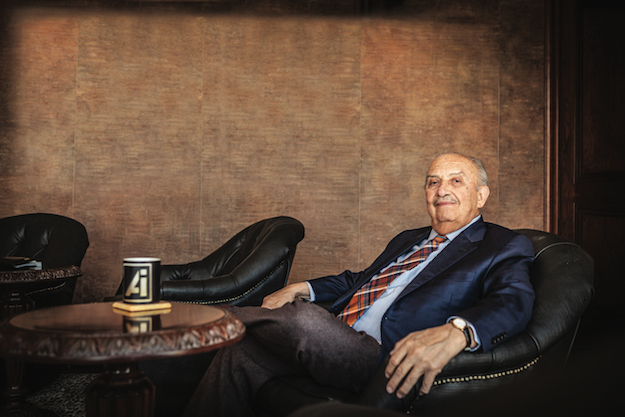 Luis Lara Armendáriz in his office in Chihuahua

As in much of Latin America, police and local authorities were ill-equipped to deal with the problem alone. By 2008, Lara saw the violence as a threat to his company, American Industries, which helps clients like GE and Honeywell set up manufacturing operations in Mexico. So he gathered a group of business and civic figures in Chihuahua to discuss how they might help stop the soaring murders and violence.

The challenges were daunting: Where would the money come from? How could they avoid the pitfalls seen elsewhere in the region when businesses get involved in public security? Would a beleaguered government even accept their help?

They were also naïve.

“I’m a little embarrassed to admit it now, but I thought I’d show up with an army of 400 or 500 experts in reducing violence,” Lara said. “(I thought): Tell me how much it costs, divvy it up and we’ll solve the problem in six months, a year, two years.”

The problem, of course, was more complicated than that.

The history of private-sector interventions in Latin American security is full of empty gestures, dubious intentions and deadly failures. The most notorious example was Colombia in the late 1980s and early 1990s, when tycoons furious over the rise of Pablo Escobar and other drug kingpins and guerrilla groups decided to create their own armies. These paramilitary forces quickly became monsters in their own right, running drugs and massacring thousands of innocent people.

Mindful of such horrors, some governments today reject outside help. Businesses and the wealthy often end up paying for their personal safety. In Mexico, the private security industry is worth at least $1.5 billon a year, about what the government set aside in 2018 for natural disasters. Elsewhere, such as in Brazil, the figure is even higher.

But despite the walls many Latin Americans in high-crime countries build around their homes and businesses, safety is never a sure thing. By the time Lara was convening local leaders in Chihuahua, public shootings and the disappearance of hundreds of young women in Ciudad Juárez had disproven the myth that the violence was limited to just cartel members.

Meanwhile, the one-two punch of violence and the global financial crisis was taking its toll on Chihuahua’s economy. Direct foreign investment in the state fell nearly 30 percent between 2008 and 2010, and more than 10,000 businesses in Juárez shut their doors. Overall, state GDP fell by 5 percent in that time. 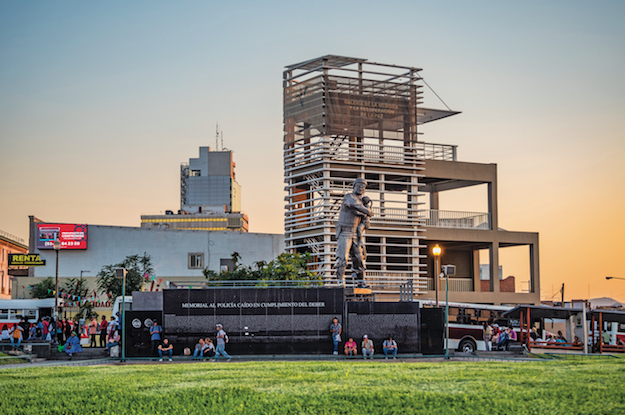 A memorial to fallen police officers in Chihuahua

“You start getting nervous, wondering if you should stay in your city or country,” said Luis Valles Benítez, who was the president of a local business association in Chihuahua. He himself was kidnapped for nine days in 2011 before being freed. The experience shook him, but ultimately strengthened his resolve to stay and work on reducing violence. “I wasn’t willing to lose my relationship with my family, my roots, the time I’ve invested in my work, because of a few bad people.”

Others saw things the same way. Civil society groups had begun to organize and push for solutions. But in 2008, there was still no reliable model in Mexico for how the private sector could act.

“At the start, it was just ignorance,” Lara said. “We blamed the cartels, and we knew something was wrong  … but we didn’t really understand what was happening.”

To educate themselves, Lara and about a dozen other business and civic leaders decided to go see a surprisingly positive case study: Colombia.

Following their disastrous experience with the paramilitaries, Colombia’s business leaders had figured out how to play a more constructive role. Private-sector support was crucial in lowering the murder rate, which had dropped by more than 50 percent from its peak in the early 1990s. The Chihuahua group met with consultants and officials, including then-President Álvaro Uribe, who upon entering office in 2002 had imposed a 1.2 percent tax on the liquid assets of wealthy Colombians and large businesses, with the revenues earmarked for security spending.

The Colombian model also included a broad range of programs aimed at the root causes of violence, like Plan Cuadrantes, a community policing effort that helped police officers build personal relationships — and trust — with residents on their beat.

The Mexicans went home convinced they had seen a viable path forward — proof of how sharing experiences among Latin Americans is often more effective than importing solutions from Europe or the United States. “Police in the U.S. may have been the best in the world, but they hadn’t dealt with the problems we were dealing with,” Valles said. “The Colombians had.”

“You Have to Have Lived It”

It would take months of consultations and pressure on local officials for the lessons from Colombia to be put into practice.

In 2010, the business leaders and their partners in civil society lobbied candidates in that year’s gubernatorial race to agree to a collaborative approach and give regular citizens a more direct role in security policy. Those agreements led to a reform of the State Public Security Council, which saw half of its seats given over to civic leaders.

After the election came the key step: A broad alliance of business leaders asked the governor to impose a new tax on all the state’s private businesses, equal to 5 percent of whatever they paid in payroll taxes. The revenues would be put into a fideicomiso, or trust, that could only be used for security, and would be administered by a nonprofit called the Trust for Safety and Competitiveness, or FICOSEC.

“For most people to be convinced of the need for something, they have to have lived it,” Lara said. And by the end of 2011, most all Chihuahuans had lived violence up close. The state legislature approved the proposal and, in 2012, FICOSEC began operations with Lara as director.

Since then, the tax has produced about $8 million per year, which FICOSEC distributes to a variety of projects. Some are managed directly by FICOSEC, while others are operated by partners, who apply for funding. Its initiatives range from job training for young people with criminal records to a certification program aimed at instilling best practices in Ciudad Juárez’s maligned municipal police force. In 2016, the department became the first, and still only, police force in Mexico to pass the certification program.

Another FICOSEC-funded project, called Del Barrio a la Comunidad, enlists former gang members in low-income communities to mentor their younger peers. Based on a similar program in Chicago, Del Barrio a la Comunidad also offers workshops and skills training for teenagers who neither work nor study, and who are at high risk of getting involved in violent crime.

Ismael Ríos Reed, 33, was deported from the U.S. in 2007 and now works as a mentor in Paraje de San Juan, a housing project on the far southern outskirts of Ciudad Juárez. The program helped him understand the positive influence he could have on younger generations, he said.

A Part to Play

So, has ficosec worked? In truth, it depends on how you measure success.

Many Chihuahuans today note a sense of shared responsibility for security among civil society, business and the government that didn’t exist in 2008. Javier Corral, Chihuahua’s governor, has called FICOSEC’s work “fundamental” to building a sense of safety in the state. The dozens of programs the organization supports have in turn helped thousands get jobs, learn new skills or go back to school.

FICOSEC’s immediate impact on violence and homicide is more difficult to gauge. By the time it started financing projects in 2013, the state murder rate had already peaked. Violence in Ciudad Juárez had ebbed to a fraction of what it was in 2010. And today, as is the case throughout Mexico, violence in Chihuahua is once again on the rise.

In the end, FICOSEC’s $8 million annual outlay is equivalent to just 0.2 percent of the state budget—hardly enough to transform Chihuahua. Mexico only collects about 14 percent of GDP in taxes, one of the lowest rates in Latin America. Improving security may ultimately depend on Mexican business leaders paying more.

FICOSEC has other shortcomings, both real and perceived. The governor who authorized the initiative, César Duarte, was accused of corruption in 2016 and is currently a fugitive. FICOSEC has been criticized for allegedly self-dealing in choosing projects to finance. Corral, Duarte’s successor, recently called for renewed attention on the organization’s reporting requirements, and spurred reforms aimed at making its project approval process more transparent.

Still, there are clear signs of progress, from Paraje de San Juan to an industrial training school in Chihuahua where young people without high school degrees learn in-demand technical skills (another FICOSEC-funded initiative).

As Mexico’s democracy matures, its citizens and business leaders are playing an increasingly significant role in the public sphere. Civil society, no matter how vibrant, cannot solve generational problems overnight. But there are plenty of people in Chihuahua who would be worse off if organizations like FICOSEC weren’t giving it a try.