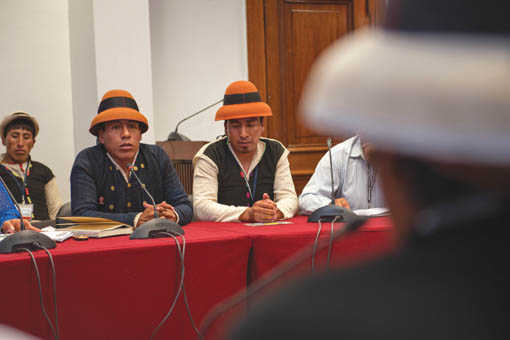 Peru was the first country in the region to pass a law implementing International Labour Organization Convention 169 (ILO 169). The 2011 law established regulations that set out how Indigenous and tribal communities must be consulted by the government on any legislative or administrative measure or project that could affect them.

But a difficult question remains: who is legally Indigenous?

In Peru, determining who has the right to be consulted under ILO 169 has become one of the government’s most controversial challenges. While 15.9 percent of Peru’s population speaks an Indigenous mother tongue, according to the most recent census—and roughly 40 percent of Peruvians claim some degree of Andean or Amazonian ancestry—many do not self-identify as Indigenous.1

To fulfill this task, the Vice Ministry released a much-debated Base de Datos de Pueblos Indígenas u Originarios (Database of Indigenous or Native Peoples)2 in October 2013. The database lists 52 unique Indigenous groups, including 48 Amazonian peoples and four Andean ones: Quechua, Aymara, Uro and Jaqaru. But it is still a work in progress.

And this is where it becomes tricky.

Peru’s national census has not included questions related to racial and ethnic factors (other than language) since 1940, although the country plans to include questions on ethnic self-identification in its 2017 census. The struggle to accurately represent race and ethnicity is not unique to Peru. Nations like Australia, Kenya and the United States are addressing similar questions in their censuses.

The complexity of ethnic self-identification in Peru is evident in a variety of public opinion surveys taken over the past decade. Such surveys may show that Peru has a self-identified Indigenous population ranging anywhere from 7 to 75 percent, depending on what questions are asked and how they are asked.

Comparing public opinion surveys taken between 2005 and 2009, Pontificia Universidad Católica del Perú sociologist David Sulmont points out that there are stark differences. For example, in the World Values Survey of 2006, 29.3 percent of respondents identified as Quechua, Aymara or “from the Amazon” when asked about their ancestry and customs. But in the 2008 Americas Barometer Latin American Public Opinion Project (LAPOP) survey, respondents were only given the option to identify as “Indigenous,” and just 7 percent identified as such, while 75.9 percent identified as “mestizo” (“mixed race”).4

According to Universidad del Pacífico professor Cynthia Sanborn, the survey results find that the question “Are you Indigenous?” will receive the lowest number of positive responses, while questions about identification with a specific group, such as Quechua or Aymara, receive a higher number of positive responses. Indigenous self-identification increases as you include questions about place of origin, native language, parents’ native tongue, and customs practiced at home. Some studies also suggest that Indigenous self-identification may decline with rural-urban migration and higher levels of formal education.

Unfortunately, the Peruvian national census can use only one or two questions on self-identification, and not a range of questions that might capture more information. Each added question requires time, investment and training of census takers. A working group involving scholars and ethnic activists meets about once a month with the staff at the Instituto Nacional de Estadística e Informática (National Institute of Statistics and Informatics—INEI), which conducts all census surveys, household surveys and other public- sector data gathering.