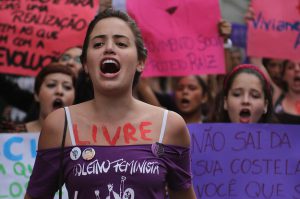 Sexual Harassment in Brazil Starts at Age Nine. Here’s What One Group Is Doing About It.

Nine years old. That’s the average age that, according to Brazilian NGO Think Olga, Brazilian females are first subjected to sexual harassment. Think Olga uncovered the startling number as part of a Twitter campaign called #primeiroassedio (#firstharassment), which encourages women to use social media to recount their first experience of sexual assault or harassment. To … Read more