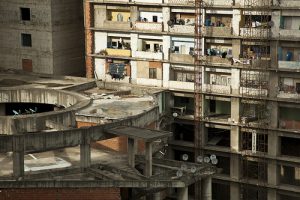 The Caracas highrise known as “Torre de David” was supposed to be the biggest financial center in Venezuela. Officially named Torre Cofinanzas—but better known as “David’s Tower,” in honor of its developer, David Brillemburg—60 percent of the building was left unfinished after the company that owned the project went bankrupt in 1994. For the next … Read more