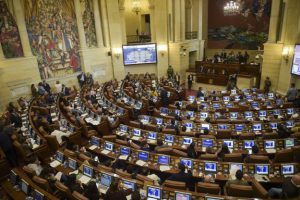 Three Lessons From the Petro-Uribe Spat

Colombia’s senate floor is the backdrop for a duel between the former president and the opposition leader. That is good news.

Colombian Congress Clears a Hurdle for Uribe’s Reelection: But Will He Run?

Earlier this week, Colombian lawmakers overwhelmingly approved a controversial referendum bill that paves the way for President Álvaro Uribe to seek a third consecutive term in office. The referendum would ask voters to decide on a constitutional amendment to allow presidents to run for a third term. But obstacles still remain. The proposal still has … Read more Colombian Congress Clears a Hurdle for Uribe’s Reelection: But Will He Run?