Brazil got globalization all wrong. In fact, its approach to trade can at times practically read like a how-not-to guide.

Faced with globalization’s potential impact on national industries, it maintains a crony and closed economy, when a more efficient adaptation to increased trade would maintain a relatively open economy while implementing policies to compensate for job losses and other negative impacts of increased international competition. After all, opening up to trade increases productivity, which helps a country escape the middle-income trap, where Brazil is firmly stuck. But unilateral protection to local companies is politically appealing, and a powerful tool in a pre-election year. Companies trot out the old argument that policymakers must erect barriers to help them save jobs – which also, conveniently, protects profits – and the government complies, despite the all evidence pointing to the contrary. All this has measurable costs to the population.

We saw this at work when Brazilian ethanol producers sought government protection from American exports. Nothing wrong with asking, as vested interests are rent-seekers by nature. But it is the job of an effective government to say to no ludicrous proposals, and this one falls under that category.

To start, Brazil is among the world’s least open economies to international trade. The sum of imports and exports (merchandise trade) is only 18 percent of GDP and, since 1960, it has never surpassed 25 percent.

Even communist and embargoed Cuba trades more with the world – around 32 percent of GDP. Latin America’s average is 36 percent, and the OECD countries, 43 percent. A lower share of trade-to-GDP is a feature of rich countries with big internal markets like the US and Japan. But in middle-income countries like Brazil and Argentina, it is a barrier to development.

Merchandise trade as a percent of GDP, selected countries, 2016. 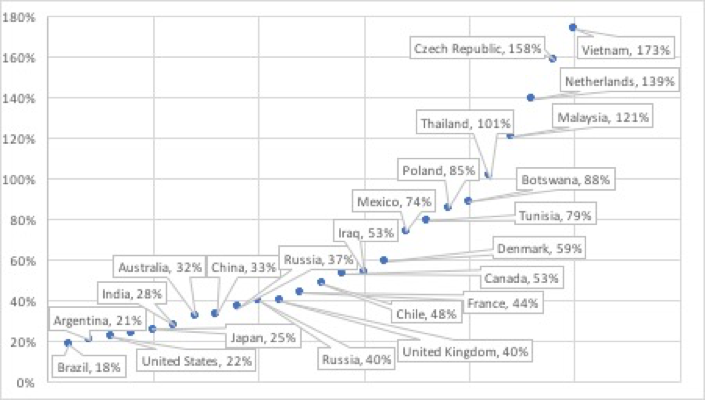 The fact is, nobody does protectionism quite like Brazil. To understand how this works, let’s take a look at one heavily protected industry – the ethanol and sugar business, whose history is intertwined with that of the nation.

Sugarcane has been a mainstay of the Brazilian economy for centuries. The first decree promoting the cultivation of sugarcane and the construction of sugar mills dates from 1516. By the 1700s, sugar exports made up most of the country’s GDP. In 1931, the Brazilian government determined that five percent of ethanol be mixed into imported gasoline; in the United States, feasibility studies on such mixtures were established by the Clean Energy Act only in 2007.

When the 1973 oil crisis threw the industrialized world into a tailspin, the Brazilian government created ProAlcool, a program that heavily subsidized producers and promoted ethanol as an alternative to expensive oil imports. The program grew after the second oil crisis but lost momentum in the 1980s and 1990s, as oil prices declined and sugar prices soared; ethanol-fueled cars peaked at 76 percent of the fleet in 1986. By the time Brazil’s economy boomed, buoyed on the surging commodities prices in the late 2000s, the ethanol industry had been sidelined, even if demand was still robust from the growth of flex fuel cars, which make up the majority of the Brazilian fleet and run on both gasoline and ethanol.

The commodities super-cycle of the early 2000s drove much of the growth in South America in the period. In Brazil, it was no different. What’s more, in 2007 Petrobras, the Brazilian state-owned oil company, announced the discovery of the largest oil field in the Americas in the past 40 years. The government pushed for an all-in strategy that would make its state-controlled oil giant the largest listed company in the world; in 2012 the company unveiled a $235 billion investment plan. It was all a mirage. A combination of incompetence, corruption and a reversal in oil prices drove the company to the brink of bankruptcy in 2016, though it has since recovered.

As the government’s focus shifted to fossil fuels, with populist measures including price caps on gasoline prices, ethanol subsidies lagged. Whereas in 2009 researchers had called for the U.S. to learn from the Brazilian promotion of ethanol, by 2017 imports of American ethanol to Brazil had skyrocketed. Brazilian producers, used to protection, demanded the government do something to curb them.

Specifically, Brazilian producers wanted import tariffs and quotas that would further close the market. Their argument has been around since the 19th century: these barriers were needed to protect national workers against the evils of unbridled globalization. Given the clout of said producers, the government ordered its economics team to come up with a report on the costs and benefits of trade barriers to ethanol imports. This included the possibility of commercial retaliation through the World Trade Organization.

The economists recommended that nothing be done, as the direct costs were estimated to be steep. In the U.S., sugar quotas cost over $800,000 per job that is alleged to be saved, almost 20 times the annual salary of a worker in the industry. In Brazil, ethanol quotas would be even more expensive; the average income of a Brazilian worker is a meager $9,000 per year. Most likely, no ethanol industry jobs would actually be saved or created– ethanol would become more expensive for all of society, and employment would decrease in industries that use ethanol as an input. The larger effects of trade globalization are not on employment but on income distribution, as the middle class in the U.S. knows so well.

In the Brazilian case, beyond creating no jobs, the proposed tariffs would likely transfer income from all of society to ethanol producers. Worse, the measures could make renewables relatively more expensive than fossil fuels, acting in effect as a fossil fuel subsidy – which is the world’s dumbest policy. Finally, the move would open Brazil up to a potential retaliation by the U.S. All this made the ethanol producers’ idea of erecting barriers to American imports a losing proposition for Brazil as a whole.

Given these facts, what did CAMEX, the Brazilian foreign trade chamber that reviews trade policy, do? It approved a 20 percent import tariff on ethanol, against the combined wisdom of economists in general and the government’s economics team in particular.

The next step was to open negotiations and get a general tariff and/or quota through Congress, to be operationalized later. Negotiations proceeded. In the end, the parties agree on a 20 percent tariff on American ethanol exports that exceed 600 million liters. The agricultural lobby remains strong, especially in a pre-election year. Ethanol producers won. Brazil lost.

This is protectionism at its worst: In a modern world where climate change is a threat and most countries subsidize renewables, the Brazilian government buckled to provide an indirect subsidy to fossil fuels, at a cost to the population. The saying goes that Brazil is the country of the future that never comes. This tariff on American ethanol is an example of why.

Zeidan is a business and finance professor at New York University in Shanghai and Fundação Dom Cabral.


Tags: Ethanol, Petrobras
Like what you've read? Subscribe to AQ for more.
Any opinions expressed in this piece do not necessarily reflect those of Americas Quarterly or its publishers.