Brazil’s Central Bank raised eyebrows in December when it lowered its target interest rate to 7 percent. That’s high by global standards, and about average for other major emerging markets, but it was a milestone for Latin America’s biggest economy: 7 percent is the lowest key interest rate in Brazil’s history.

That Brazil’s all-time lowest interest rate is so high shows just how off-kilter the country’s credit markets have become. The costs for Brazilian consumers and small businesses to take out loans are among the highest in the world. At 51 percent per year, Brazil’s lending rate is almost 20 percent more than in its crisis-prone neighbor, Argentina. Brazilians pay off credit cards at around 290 annual percentage rate, or APR. Personal loans average 130 APR. 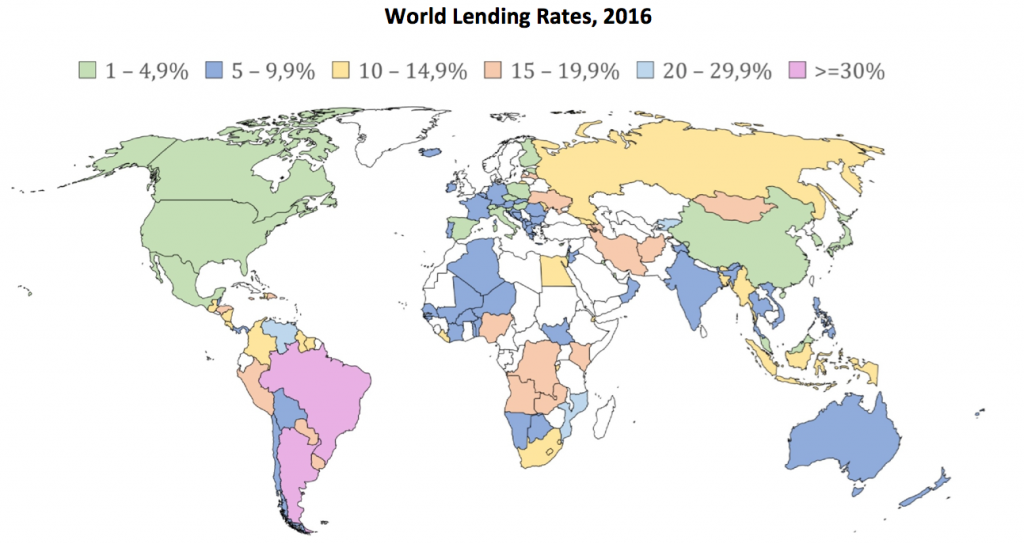 Source for all figures: World Bank and Central Bank News

In economics, if the price of a service is unusually high, it’s because of inadequate supply. In Brazil, commercial banks simply do not dole out enough credit to consumers or businesses. There are four major reasons why; tackling them is key to lowering costs and breaking the logjam.

The last financial crisis in Brazil happened in the mid-1990s, when the BCB was forced to rescue the financial system, lending approximately $20 billion to 43 banks. Since then, financial system stability has been the key goal of the bank, regardless of the cost to credit access and economic growth. Today, given the BCB’s hyper-prudent approach, a financial crisis should be the least of Brazilians’ worries.

The main tool to keep financial markets in check is the required reserves ratio, the amount that commercial banks are required to put aside in case their clients decide to retrieve their money at a moment’s notice. In the Euro zone this ratio is around 2 percent, although banks usually hold voluntary reserves as well. In Brazil, the BCB sets the rate at 45 percent; the result is that much less money is available for lending. Even time deposits, which cannot be withdrawn before a set maturity date, include reserve requirements of more than 33 percent.

Other regulatory indicators paint a similar picture. For example, the liquidity coverage ratio, a measure of how much short-term assets banks have available in the event of a crisis, in Brazil is 224 percent, whereas the global average is 100 percent. All of this increases costs for consumers. Granted, too little regulation is also a bad thing (see the U.S. financial crisis), but Brazil needs to find a better balance for consumers and small businesses in order to grow.

Brazil’s Central Bank also has a long history of directing credit to favored sectors. Banks are obliged to funnel 34 percent of short-term deposits to the agricultural sector and 2 percent to microcredit. For savings deposits, 65 percent has to go to mortgage lending. The main development bank, BNDES, lends more than the World Bank. This creates distortions in which the favored sectors benefit since banks are forced to lend to them instead of creating credit for all.

While in the U.S. legislation makes it difficult for consumers to sue banks, in Brazil the rules and judicial practices heavily favor individuals over companies. On the one hand, this means that consumers rarely face repossession of goods and services and are protected from personal bankruptcies. On the other hand, most people lack access to credit. 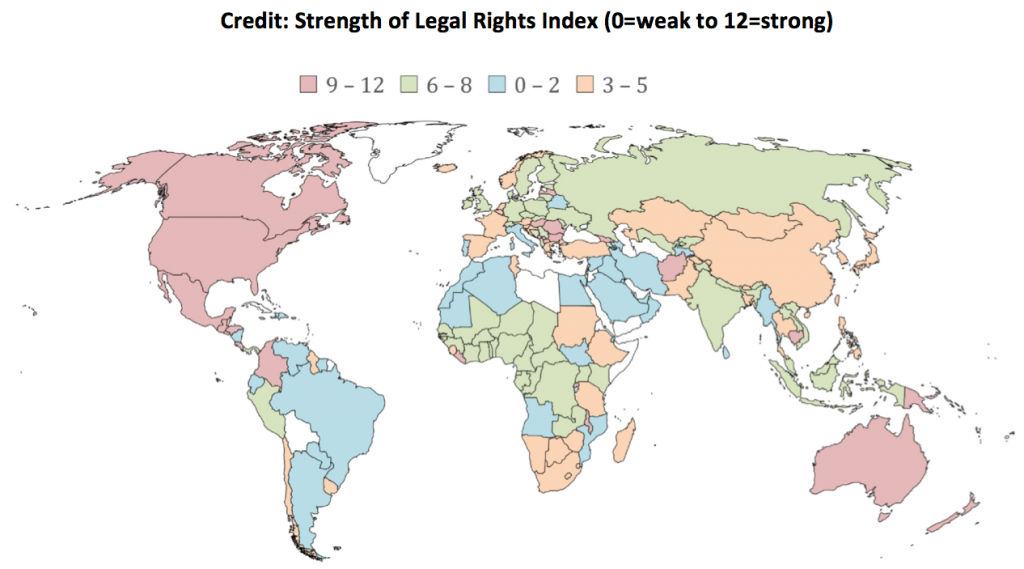 Creditor rights are also quite weak in Brazil, even in comparison to other emerging markets. Officials have taken some steps to address this issue. The Senate recently approved an opt-out credit bureau that may reduce the information asymmetry between banks and clients. But this is just one step on the road to a legal framework that facilitates lending; more is required to make the legal risks of lending worth taking for banks.

Unfortunately, there is little incentive for Brazilian banks or entrepreneurs to test new financial products in the market. The BCB keeps the Brazilian financial system mostly insulated from the rest of the world, which limits innovation and encourages collusive behavior.

Whenever a new company breaks in and tries to address one of the multitude of failures in the credit market, it is usually scooped by one of the large banks – one example being the recent purchase of XP Investimentos by Itaú. The size of Brazil’s five largest banks almost doubled in the 21st century. Fewer competitors leads to less competition, and less need to pursue new ideas. 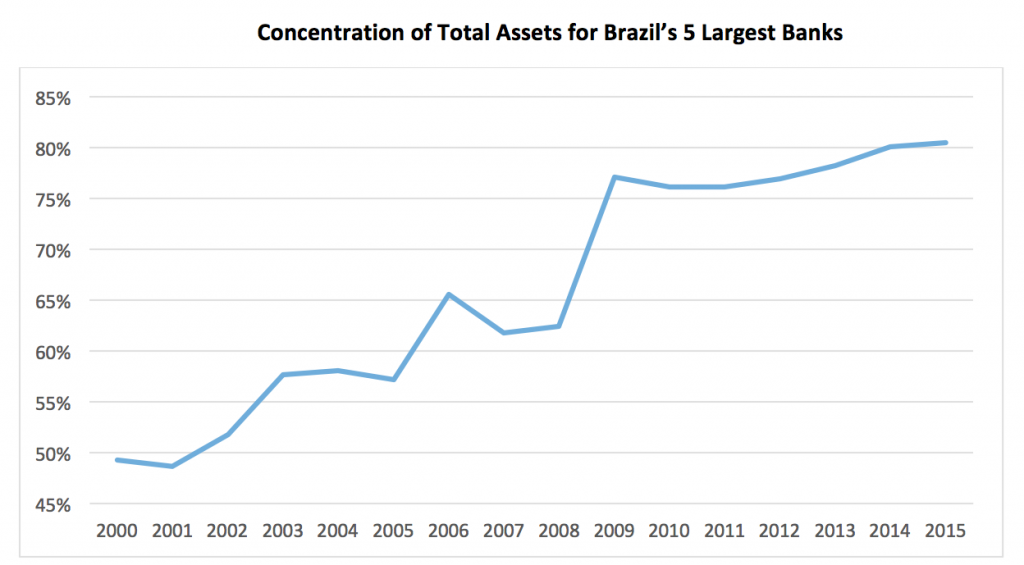 A look at another emerging market economy can be instructive in this regard. In China, consumers need only their smartphones in order to take out a loan. They can borrow and trade on apps while fintechs, innovative financial technology companies with new solutions for financial markets, are flourishing. In Brazil, the BCB wants to allow such companies, but on its own terms. Otávio Damaso, the director of the BCB, recently told  Reuters that “new regulations would pave the way for (the development of credit fintechs) within a secure judicial framework.” In the end, though, private commercial banks don’t supply much credit because it is not particularly lucrative for them to do so. Their protection from competition allows banks to keep revenue coming in without lending too much. News about bank profits reaching new highs is common. But most of those profits come from fees, insurance and other financial services, not from lending.

In spite of all the obstacles, credit as a percentage of GDP has grown in Brazil throughout the 21st century. It is now about average for its level of development, even though most of the growth came from state-owned banks. Credit remains expensive or in the hands of a privileged few. 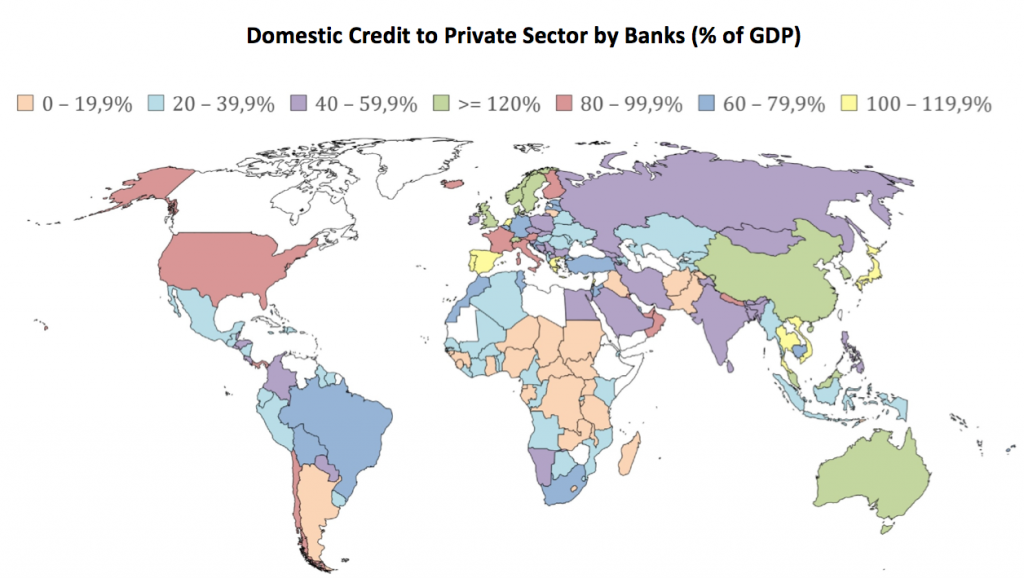 Brazil is in desperate need of unlocking its credit market for small- and medium-sized companies. For credit to go up and interest rates to go down in a healthy manner, the country should enact market reforms to find an equilibrium between prudence and efficiency. Stability should continue to be the main driver, but the BCB should move from its extreme preoccupation with stability to a larger mix of innovation and efficiency. It should greatly reduce directed credit, lower the required ratio, incentivize competition, allow a flexible regulatory framework for fintechs, and move forward with the positive credit bureau and other similar measures.

These would go a long way in lowering personal loan rates to double digits and allowing small companies to take on debt to grow and generate jobs. Such measures would also help lower the double-digit unemployment rate and jumpstart sustainable economic growth.


Tags: Brazil, Credit, finance
Like what you've read? Subscribe to AQ for more.
Any opinions expressed in this piece do not necessarily reflect those of Americas Quarterly or its publishers.