Argentina is the region’s first country to legalize gay marriage, but tolerance is not as high across countries. Here’s why.

But gay marriage is also the subject of intense discussion across the Americas. Disputes are marked by sharply conflicting opinions among citizens, social organizations, religious groups, the highly influential Catholic Church, and policymakers. In Latin America, these debates have led to outcomes that vary sharply across countries.

Same-sex marriage is constitutionally banned in Honduras (2005), El Salvador (2009) and the Dominican Republic (2009). In Bolivia, the new Constitution (2009) limits legally recognized marriage to opposite-sex unions. In Costa Rica, the Supreme Court ruled against same-sex couples seeking the right to be legally married (2006), while a national referendum on the subject remains a possibility.

Yet same-sex civil unions, which give homosexual couples some of the rights enjoyed by heterosexual ones (including social security inheritance and joint ownership of property, but excluding adoption rights), are legal in Uruguay (2008), Ecuador (2008), Colombia (2009), Brazil (since 2004), and in a few Mexican and Venezuelan states. 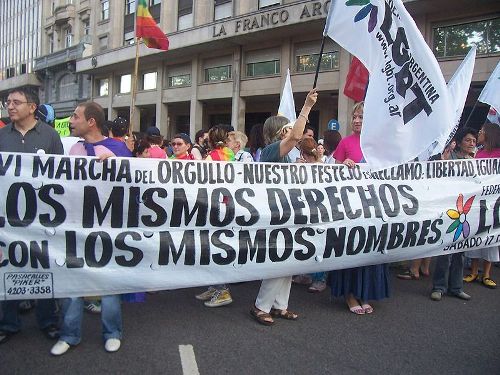 With public policies toward gay marriage varying widely, this is a critical moment to look at citizens’ opinions with respect to same-sex marriage. First, we examine levels of support for same-sex couples having the right to marry. Then, we assess both individual- and national-level determinants of variation in that level of support. Analysis is drawn from data from the American Public Opinion Project (LAPOP) survey, which includes 42,238 respondents from 25 nations in North, Central and South America and the Caribbean were asked this question:

We asked the following question: How strongly do you approve or disapprove of same-sex couples having the right to marry?

Figure 1 displays each country’s average score with its confidence interval. The average level of support for same-sex marriage in the Americas is only 26.8 points on a 0-100 scale.

But there is striking variation across countries. At the one extreme, citizens of Canada, Argentina and Uruguay express relatively high levels of support and fall on the high end of the 0-100 continuum, with mean scores of 63.9, 57.7, 50.5, and 47.7 points, respectively. At the other extreme, El Salvador, Guyana and Jamaica (where sexual acts between men are punishable with jail) show the lowest levels of support: 10.3, 7.2 and 3.5 units, respectively.

The remaining countries lie in between these extremes, with those nations in which same-sex civil union has been legalized (i.e., Brazil, Mexico and Colombia) ranking in relatively high positions. Notably, despite the fact that the newly approved constitution grants full rights to homosexual civil unions, Ecuador is positioned well below the regional average with 18.4 points on the 0-100 scale.

Figure 1. Average Support for Same-Sex Marriage in the Americas, 2010 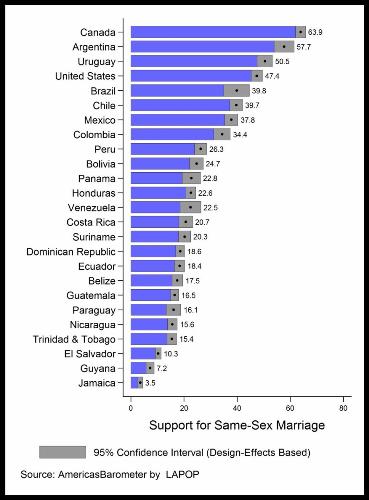 What factors explain variation in support for same-sex marriage? To assess this question, we first focus on the potential impact of individual-level factors by means of a linear regression model. Following the publication of seminal research on political tolerance that examines the impact of religious values toward homosexuals (Gibson and Tedin 1988; Golebiowska 1995), we include two variables that are considered to be key: importance of religion and religious group participation. The former measures how important religion is in the respondent’s life, and the latter measures the respondent’s self-reported level of attendance at meetings of any religious organization.

Several scholars have found that disapproval of homosexual rights is highest among individuals with strong religious identities and who attend religious services frequently (Ellison and Musick 1993; Herek 1998; Herek and Capitanio 1995, 1996; Olsen, Cadge, and Harrison 2006; Seltzer 1993; Wilcox and Wolport 2000). Therefore, we expect these variables to have a negative impact on support for same-sex marriage. Beliefs about homosexuality and support for gay rights have been found to vary substantially by religion. Therefore, we also included two dummy variables, Evangelical and Atheist, in order to capture the effect of religious affiliations.  While Atheists are expected to express tolerance toward minorities’ rights, membership in evangelical denominations has been found to be linked to intolerance of homosexuals in the United States (Jelen, 1982). While this finding could be partly attributed to differences in demographic or political variables, or to general religiosity, Wilcox and Jelen (1990) demonstrated that intolerance among Evangelicals persists even after controlling for these considerations.

Also included in the regression is a variable that captures the respondent’s political ideology. This variable is based on a 1-10 scale, where ‘1’ means left or liberal and ‘10’ means right or conservative. For obvious reasons, we expect more conservative respondents to be less prone to support same-sex marriage than liberal ones.

Finally, we take into account a number of variables measuring basic socioeconomic and demographic characteristics that are thought to play a role in shaping public opinion toward homosexuality. We include education, age, gender, wealth, and city/town size. The expectation is that more educated individuals will have more liberal sexual attitudes and express higher levels of support for same-sex marriage than less educated persons (Ellison and Musick 1993; Gibson and Tedin 1988; Herek and Capitanio 1996; Treas 2002). Similarly, we expect older people to be less tolerant toward gays/lesbians than younger people. As found in prior research, we also expect men to be more inclined to disapprove of homosexuality than women (Herek 2002; Kite 1984; Kite and Whitley 1996), and people with higher incomes to be more tolerant than people with lower incomes (Hodgess Persell, Green, and Gurevitch 2001). Following research by Stephan and McMullin (1982), we expect urbanism to be positively associated with tolerance toward homosexuals and support for same-sex marriage.

Our analysis supports these expectations. First, even when controlling for socioeconomic and demographic factors and the impact of country of residence (the “country fixed effects”), both the importance of religion and attendance at religious meetings variables have a statistically significant negative impact on support for same-sex marriage. Specifically, the more important religion is to respondents’ lives and the more frequently they attend religious meetings, the lower the support they express for same-sex couples having the right to marry.

Second, we find that Evangelicals, compared to individuals who profess other religions, are significantly less likely to support same-sex marriage, while those who say that they are Atheists or agnostic about religion are more likely to support it. Third, holding all other variables constant, respondents’ ideological self-placement works as we expected. The statistically significant negative impact of the political ideology variable indicates that the more conservative respondents are, the lower the level of support for same-sex marriage they express.

We also find that all the socioeconomic and demographic variables included in the model are statistically significant in how we had envisioned it. First, size of the geographic area of residence is positively linked to our dependent variable, indicating that residents of large cities express higher levels of support than those living in rural areas and small cities. Second, citizens with more years of completed education express higher support than individuals with less formal education. Third, both wealthier and younger persons express more tolerance toward homosexual marriages than poorer and older people. Fourth, the positive effect of the gender (female) dummy variable indicates that women express higher levels of support than men.

Predicting Support for Same-Sex Marriage: The Effect of Contextual Variables

In addition to the individual-level characteristics, other factors at the country-level of analysis may help explain variation in the degree to which citizens in the Americas support same-sex marriage. Extensive research on political tolerance in democratic regimes has underscored the important effects of economic development and education on acceptance of diversity. To empirically test these propositions, we estimated separate multi-level regression models. The models include the respondents’ individual characteristics alongside measures of each country’s level of economic development or education, depending on the model. These variables are measured by GDP per capita and a composite index of adult literacy and gross enrollment, respectively.

The statistical results are graphically shown in Figures 2 and 3. As they show, the impact of individual characteristics remains almost unchanged when compared to our previous results, while the contextual variables have the expected positive relationships to support for same-sex marriage. More concretely, citizens who live in richer and more educated countries express significantly higher levels of support compared to those who live in poorer and less educated nations.

Figure 2. A Multilevel Analysis of the Determinants of Support for Same-Sex Marriage in Latin America and the Caribbean, 2010: The Impact of GDP. 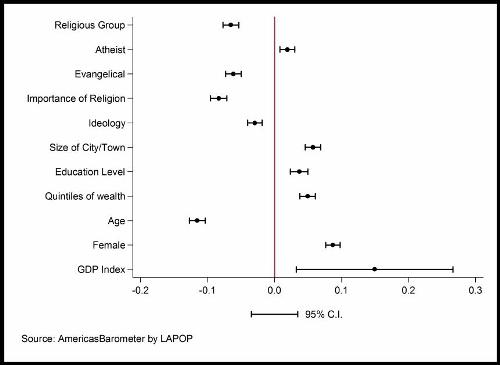 Figure 3. A Multilevel Analysis of the Determinants of Support for Same-Sex Marriage in Latin America and the Caribbean, 2010: The Impact of Education. 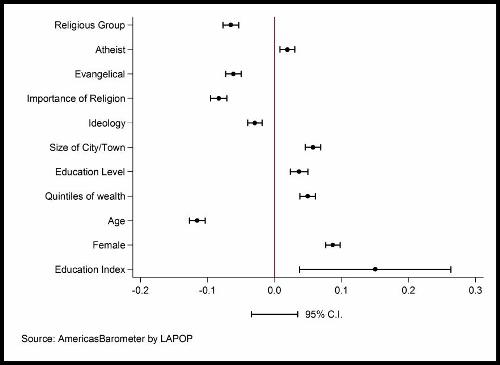 The specific effects of economic development and education at the national-level on support for same-sex marriage are displayed in Figures 4 and 5 respectively. These figures show the fitted lines from the two multi-level regression models using national GDP per capita and the education index. Holding constant all the individual-level variables at their mean value, the models predict similar results compared to the ranking depicted in Figure 1. As a noteworthy exception, Trinidad and Tobago dramatically improves its position in Figure 4 compared to Figure 1. This suggests that the country is strongly influenced by other variables not included in our model.

Nonetheless, the results show that higher levels of economic development and education predict substantially higher levels of support for same-sex marriage. Substantively, if a citizen from Nicaragua with a given set of socioeconomic characteristics were to move to Argentina, ceteris paribus, and none of her personal characteristics were to change, this person would demonstrate a level of support for same-sex marriage that would be about 20 points higher on average than if this individual were to remain in Nicaragua.

Figure 4. The Impact of Economic Development on Support for Same-Sex Marriage in Latin America and the Caribbean, 2010 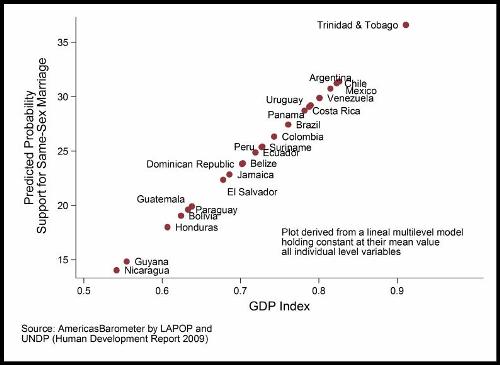 Figure 5. The Impact of Education on Support for Same-Sex Marriage in Latin America and the Caribbean, 2010 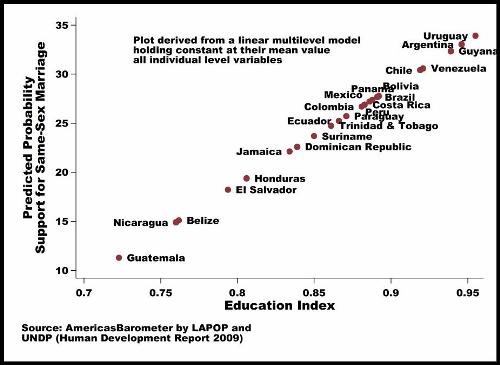 The data reconfirm that citizens in Latin America and Caribbean, on average, express relatively low levels of support for same-sex marriage. But there is also significant cross-national variation. At the individual-level of analysis, our statistical analysis indicates that strong religious values and more conservative ideologies have a significant negative impact on individual support for homosexuals having the right to marry. In addition, we found that levels of support are higher among wealthier people, individuals living in larger cities, and women. In our analyses of national-level factors, we found strong empirical evidence supporting the classic claim that both economic development and education increase tolerance for homosexual rights.

These results are consistent with those for studies of tolerance over a broad range of minority rights issues, which collectively highlight the significance of education at both the individual and national level. To promote tolerance of minority rights, policymakers and politicians should consider the importance of expanding access to education among their citizens.

Although some have argued that tolerance of diversity might have no real consequences for democracy (Mueller 1988), others have found strong evidence of its positive effects on the construction of democratic policies (Gibson 1992). An important implication is that the vision offered by liberal democratic theorists of a society that accepts diversity and protects minority rights is more likely to develop to the extent that policymakers pay close attention to improving citizens’ well being and education. Higher economic development and education tend to be linked with greater tolerance because they stimulate individual value priorities that are conducive to greater openness to diversity.

Much of the funding for the 2010 AmericasBarometer round was provided by the United States Agency for International Development (USAID). Other important sources of support were the Inter-American Development Bank (IADB), the United Nations Development Program (UNDP), and Vanderbilt University.

The Insights Series is co‐edited by Professors Mitchell A. Seligson and Elizabeth Zechmeister with administrative, technical and intellectual support from the LAPOP group at Vanderbilt University.

Read prior issues in the Insights series or  view the entire dataset.


Tags: AmericasBarometer, Gay Rights, Public opinion in Latin America
Like what you've read? Subscribe to AQ for more.
Any opinions expressed in this piece do not necessarily reflect those of Americas Quarterly or its publishers.