Like so much else in Puerto Rico in the wake of Hurricane Maria, restoring cultural life on the island has taken resilience, unity and plenty of improvisation. Cuentos de Huracán (Hurricane Stories), a new short story collection written largely in the darkness and uncertainty that followed the storm, is a prime example.

Compiled and edited by Puerto Rican poet and activist Mayra Santos-Febres, the collection, which was presented on April 8 at the annual Festival de la Palabra in San Juan, is an effort to make sense of the destruction the storm left behind. Twenty Puerto Rican authors contributed to the anthology, offering fictionalized accounts of their experiences and emotions before, during and after Maria’s pass over the island in September 2017.

“As the winds ravaged Puerto Ricans here and in the diaspora,” Santos-Febres writes in the book’s prologue, “a common history was reflected in hundreds of thousands of stories.” 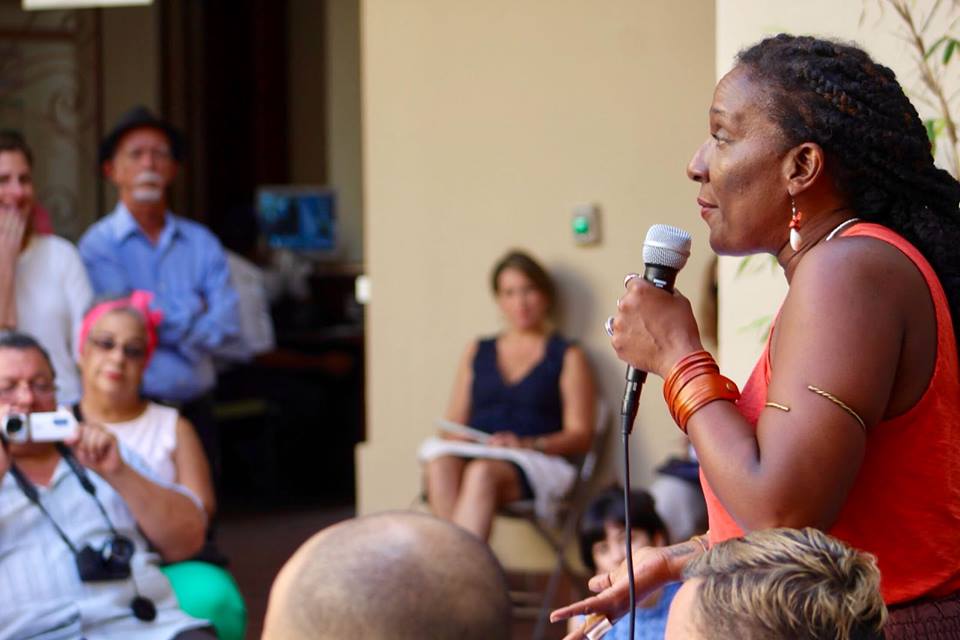 For Santos-Febres, presenting some of those stories at the Festival de la Palabra, which she has directed since 2011, felt like coming full circle; it was the cancelation of the 2017 festival that gave impetus to the anthology in the first place.

Originally scheduled for October, when much of the island was without power and emergency efforts were still underway, last year’s gathering had to be put off. Their plans on hold, Santos-Febres and other festival organizers set to work helping their neighbors in any way they could. That meant delivering water and food, of course, but also what she and her colleagues knew best: literature.

All together, the festival organizers visited more than 50 schools in the weeks after the storm. They discussed storytelling with teenagers and children who often lacked access to clean water, let alone classrooms in which to learn. They also gathered books and put them in the hands of hundreds of eager readers.

“We were surprised people were asking us for more and more books,” Santos-Febres told AQ. “The lack of electricity was driving people crazy.”

Deprived of television and power for electronic devices, many of those affected by the storm needed remedies for the boredom and anxiety that came with the work of putting their lives back together.

“They needed time to digest what had happened and also needed ways to express their feelings about it,” Santos-Febres said.

From there, Cuentos de Huracán was born. Inspired by the reaction to her visits to the schools, Santos-Febres recruited other Puerto Rican essayists, novelists and poets to contribute stories based on their experience.

The resulting collection of fiction offers a rich, diverse account of Hurricane Maria and what it means to have lived through it. Some of the 20 tales talk about death and devastation, while others embrace perseverance. As part of the process of assembling the collection, the hurricane became an opportunity, a fresh start not just for the writers, but for Puerto Rico itself.

The list of authors is a veritable who’s who of Puerto Rican writers – Tina Casanova, Eduardo Lalo, Awilda Cáez and Christian Ibarra all contributed. The often trying circumstances in which many of the authors wrote their stories points to the spirit of resilience present in the collection.

“None of the pens I had worked well,” Gael Solano, a fiction writer who contributed a story titled Hijo del viento (Son of the Wind), told AQ. “I found a black pen on the bathroom floor, which I used. Later I learned it was my girlfriend’s eye liner.”

Solano’s story is filled with the same irony and humor he uses to describe his creative process. Hijo del Viento tells the story of a woman who fights through the emotions of a turbulent plane ride, only to find herself fighting through the wind and rains of the terrifying storm. In the story, Solano discusses fear and how mental tricks can help people overcome extreme situations.

Cáez, by contrast, wrote not about the hurricane itself, but the impact natural disasters can have on personal relationships. Her story centers on a woman who is jealous of the attention her husband gives to his aquarium in the wake of the storm, which leads him to neglect her own needs. Cáez dedicated the work to “the couples that supported each other during the odyssey.”

All of the stories in Cuentos de Huracán, in their way, build on a larger effort to reflect Puerto Rican identity and the strength required to overcome the effects of the storm. The book offers an account of Maria, and the hidden faces of its protagonists, that is not often reflected in the news.

Cuentos de Huracán is also an ongoing project. In the six months since the storm, through workshops in schools and visits to shelters, Santos-Febres and the rest of the Festival de la Palabra team have encouraged students to write about their own experiences. A second anthology will collect the stories written by those young authors, Santos-Febres said.

Meanwhile, Cuentos de Huracán serves as a reminder that not only water and food are needed after a disaster; culture and shared experience are also a vital part of the healing process.

Hernández-Tapia is an editor at AQ