Marina Cué, a lightly-wooded parcel of land amid stunted fields of soybean in the district of Curuguaty, eastern Paraguay, seems like an oasis of calm today. But the casings from high-calibre rounds that locals still find in the grass tell a different story: that of a forced eviction here involving 300 heavily-armed police and a few dozen campesinos on June 15th, 2012, that ended in a hail of bullets, leaving 11 landless farmers and 6 police dead.

“I lost two brothers in the massacre at Curuguaty,” says Marina Paredes, speaking a few meters from where they were killed, on the fifth anniversary of the killings. “It’s a very hard day today.”

What happened had lasting political, legal and social consequences. A judicial investigation slammed by the UN’s human-rights authority as deeply flawed handed life sentences to several campesinos, leaving others in legal limbo. The killings set the tone for further violent evictions of campesino and indigenous communities in Paraguay’s impoverished countryside.

The deaths were also used by forces hostile to the then-president, the left-leaning ex-bishop Fernando Lugo, to remove him in an “express impeachment” a week later. Lugo’s fall paved the way for the conservative Colorado Party to return to power in elections in 2013, with Lugo’s 2008-2012 tenure marking the only interruption to Colorado rule for the past 70 years.

The Colorado presidency of Horacio Cartes has since doubled down on Paraguay’s commitment to a growth model based on intensive agribusiness and outside investment at the expense, critics claim, of the rural and urban poor. While the economy has grown steadily, government data released in June suggest that poverty reduction has stalled since 2012, with the nationally-defined poverty rate of 29 percent rising to nearly 40 percent in rural areas.

And, seemingly chastened by his experience in 2012, Lugo’s Frente Guasú coalition has, as elections in 2018 approach, formed a marriage of convenience with Cartes’ Colorados. A controversial joint bid to scrap presidential term limits provoked fierce protests in March; in June, the same parties that removed Lugo in 2012 voted to make him president of Paraguay’s Senate, in an apparent quid pro quo whose details are still unclear.

The events at Marina Cué and their aftermath, in short, proved to be a watershed moment in Paraguay’s recent history. Yet the families of the victims and campaigners now hope to overturn the controversial ruling, potentially reopening barely-healed wounds and prompting renewed national soul-searching about the meaning of what happened five years ago.

What happened at Curuguaty?

Marina Cué was donated in 1966 to Paraguay’s navy, which barely used the land. The state earmarked it for distribution to landless campesinos in 2004. But Campos Morombí – a major agricultural company which owns a huge adjacent property – objected, claiming the territory for itself.

Frustrated by a glacial judicial process, local campesinos occupied Marina Cué in May 2012, saying they would leave if shown evidence it belonged to Campos Morombí. Negotiations stalled between the authorities and the occupiers, who were armed only with a few aged hunting shotguns.

Early on June 15th, over 300 police officers surrounded the area, including SWAT-style teams carrying assault weapons. A final attempt at dialogue was interrupted by a fusillade of automatic gunfire, followed by a minute of sporadic gunshots. Who is to blame remains hotly contested, with the Paraguayan state’s handling of the investigation into the killings and their aftermath proving as controversial as the events themselves.

After a stop-and-start judicial investigation, in July 2016 a court delivered jail sentences of between four and 35 years for 11 campesinos. The deaths of their friends and relatives were not investigated on the grounds that the police were acting in self-defense. The UN human rights chief was “deeply troubled” by alleged irregularities in the judicial process.

Jalil Rachid, the prosecutor, acknowledged having personal ties to the Riquelme family, the owners of Campos Morombí. The Riquelmes are in turn closely associated with the Colorado Party, which has governed Paraguay almost without interruption for the past 70 years.

“Effectively, all the evidence presented by the defense was rejected,” said Sonia Von Lepel, a lawyer working with Codehupy. “Documents and photos which the Public Ministry was responsible for went missing… the court was blind from the start,” she added. The pilot of a police helicopter hovering over the scene who claimed to have on-board cameras filming the events later died in a reported crash. The tapes never emerged.

Von Lepel thinks that the harsh sentences were designed to discourage future occupations.

“It was a message from the group in political power, who have their tentacles in the judiciary and prosecutor’s office,” she said.

In August 2016, Paraguay’s congress voted to create a committee to investigate the case at the repeated request of the UN.

There are also concerns about ongoing human rights violations. Several of the campesinos, charged but never convicted, still face restrictions on their movement. Four of those sentenced are being held in Tacumbú, a notoriously overcrowded jail. Karina Godoy’s husband, Arnaldo Quintana, is among them.

“It’s very hard for us,” she said, with her baby daughter, Alma, on her knee. “There’s lots of injustice here.” 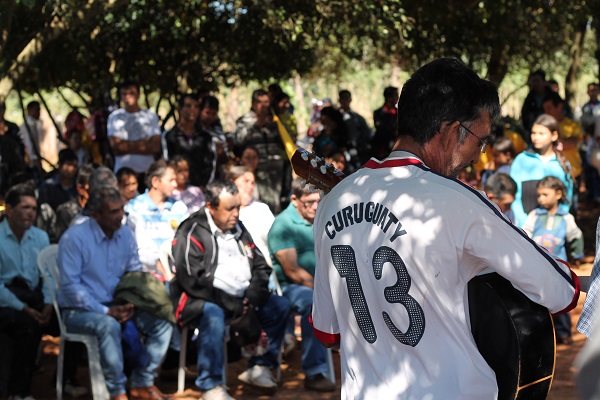 The community at Marina Cué holds a church service to remember those killed in 2012.

An appeals court confirmed the harsh sentences in June this year. But if a final review in July does the same, the families of Marina Cué and their supporters are hoping that the case will be brought before the Inter-American Court of Human Rights (IACHR), where they are confident the sentences will be overturned.

“We’ve already been lucky to speak with a commissioner from the CIDH (The Inter-American Commission on Human Rights) and a UN rapporteur,” said Dario Acosta, president of the association of families affected by the Curuguaty killings. “We have faith in the international court.”

Yet even if the Commission brings the case before the Court and it rules against Paraguay – as in previous cases concerning indigenous land – some fear the domestic legal precedent that the Curuguaty case will establish.

“It’s not the same to win outside the country as it is here,” said Guillermina Kanonnikoff, a veteran human-rights campaigner supporting the campesinos. “If we lose here in Curuguaty, we set down jurisprudence and will lose in other cases. It’s a criminalization of social struggle.”

The human rights division of Paraguay’s interior ministry did not respond to requests for comment, although the judiciary has previously maintained that the Curuguaty trial observed due process and was free from political intervention. The Cartes administration also reports having tripled the number of grants of territory made by INDERT, the congested state agency responsible for land reform, in comparison with the 2009 to 2012 period. 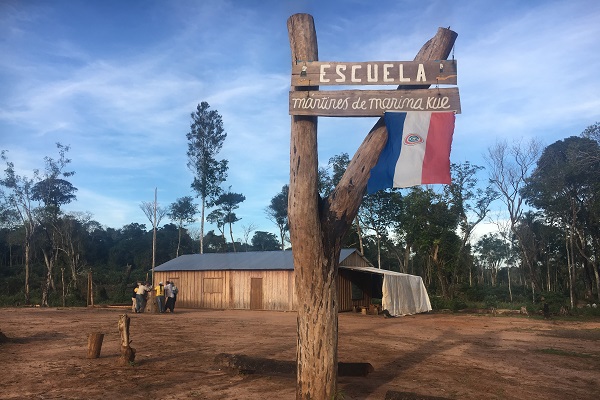 A newly built school at Marina Cué, dedicated to the “martyrs” of Curuguaty.

For many, though, the pace of reform remains far too slow. Some, like those at Marina Cué, are taking matters into their own hands. In 2016, the campesinos returned to occupy the land after Campos Morombí relinquished its claim, although their legal status is still uncertain. Last month, local police were among those who attended a commemoration of the 2012 killings, leaving flowers at the rudimentary crosses stuck into the earth where the campesinos fell alongside their colleagues.

After an open-air mass under the shade of the trees, Alberto Paredes – Marina’s father – recalled how he lost his two eldest sons, Fermín and Luis. When the shooting broke out, he dived for cover in a patch of tall grass. Fermín, 28, had been shot in the leg.

“I stayed quiet, lying down. I could hear my son shouting for me to help and get him away from there. But I couldn’t move because I was afraid,” he said, gesturing to where he hid.

Alberto managed to crawl to safety, but witnesses claim that Fermín was later executed. The following morning, rescuers found that Luis, 26, had also been shot in the head as he tried to flee. Among those killed were an 18-year-old and a 67-year-old; several left behind children.

“Five years have passed and they still haven’t investigated the deaths of our compañeros campesinos,” Marina said.

Despite the painful memories, a sense of cautious optimism, religious fervour and political idealism remains. Some 120 families have raised clapboard-and-tarpaulin houses amid the forest, planted corn, beans and fruit, and built a single-room school, named after those they consider the martyrs of Marina Cué.

“We feel very proud,” said Marina, who has set up a small shop in the community. “These are the fruits of the struggle.”

Blair is a freelance journalist based between London and Latin America. He is currently writing a book on South American history due for publication with Bodley Head/Penguin Random House in 2018. Follow him on Twitter at @LABlair1492.


Tags: campesinos, Curuguaty, Fernando Lugo, Paraguay
Like what you've read? Subscribe to AQ for more.
Any opinions expressed in this piece do not necessarily reflect those of Americas Quarterly or its publishers.