The peacekeeping mission in Haiti (UN Stabilization Mission in Haiti or MINUSTAH) is the only peacekeeping operation in the Western Hemisphere. It is the third largest mission and about 12.5 percent of the world’s peacekeepers are concentrated on the island. Several Western hemisphere countries contribute to the forces including Brazil, Uruguay, Canada, Chile, Colombia, Peru, El Salvador, Jamaica, Ecuador, Guatemala, and even the United States. Yet, over the past years MINUSTAH has received a lot of negative publicity.

Originally, the mission was established in 2004 after President Bertrand Aristide departed Haiti for exile in the aftermath of an armed conflict, which spread to several cities across the country. Then in 2010, the January earthquake struck the island, killing over 220,000 people including 96 UN peacekeepers. This led to a dramatic setback to the mission and the UN Security Council increased the overall force to support the immediate recovery, reconstruction and stability efforts in the country. Today, there are about 12,438 UN personnel in Haiti with 167 having been killed.

Despite praise of the mission’s successes, there have been many drawbacks; Haitians have an all time low opinion of the mission. Recently, Nepali peacekeepers were blamed for the spread of a cholera outbreak, leading to lawsuits against the UN. On November 3, 2011, the Institute for Justice and Democracy in Haiti and Bureau des Avocats Internationaux filed a legal complaint on behalf of over 5,000 cholera victims seeking damages from the United Nations. The UN has so far not responded or given a timetable for a response. To date the disease has killed more than 6,900 Haitians and infected more than half a million.

In addition to the negative fallout from the cholera outbreak, the news of assaults and sexual abuse committed by peacekeeping soldiers has resulted in even more negative opinions about the mission. In December, Brazilian peacekeeping soldiers were accused of beating up three young men, and in September, a video of Uruguayan soldiers raping an 18-year-old man surfaced. In 2007, more than 100 UN soldiers from Sri Lanka were deported under charges of sexual abuse of under-age girls. The incidents are likely to add to the resentment that Haitians have for the UN troops who have occupied their country for more than seven years.

So, what can be done to enhance the image of peacekeepers? One solution may be increasing the number of female peacekeepers in Haiti. Some reports suggest that female peacekeepers are much more popular among local populations than male peacekeepers. Indeed, the UN has made it a goal to increase female peacekeeping because gender integration brings added value to the missions. Moreover, UN Security Council Resolution 1325 mandates increased participation of women in most conflict situations.

Analyzing data from the UN on the number of female peacekeepers deployed since 2006, the average percentage of female peacekeepers in each mission is around 2 percent. It is important to note that overall 2.3 percent of military peacekeepers are women. It should also be noted that there was an all female contingency of Bangladeshi female police officer peacekeepers sent to Haiti. But not as much attention has been directed toward them, and compared to the all female police unit sent to Liberia, there is little information about their activities. 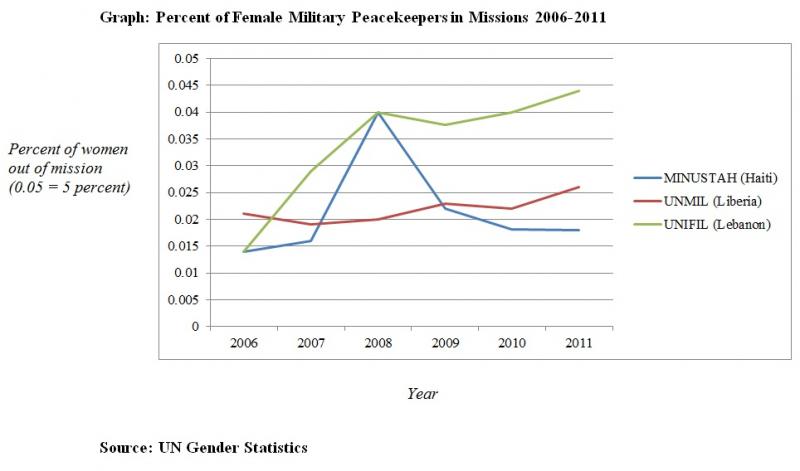 Nevertheless, as the mission’s reputation has diminished so has the proportion of females in the peacekeeping mission. It may just be time to rethink strategy.

Sabrina Karim is a contributing blogger to AQ Online and is currently living in Lima, Peru as part of a Fulbright Fellowship.

Sabrina Karim was a 2010 U.S. Fulbright Scholar to Peru, affiliated with Grupo de Análisis para Desarrollo (GRADE). She specializes in issues related to security, gender, peacekeeping, and counterinsurgency.  She is currently a PhD candidate in political science at Emory University.