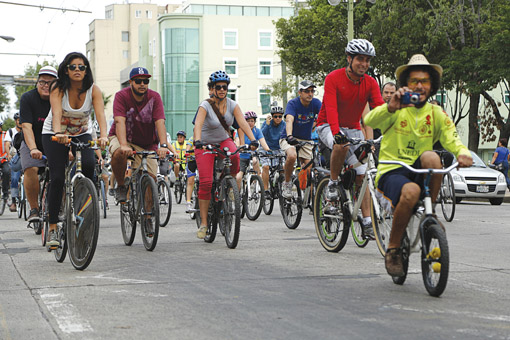 Although elections have become a regular and relatively free process in Latin America—with 2014 bringing a new round of elections for presidents and mayors—high levels of inequality impose real constraints on citizen participation in politics. A lack of public information about the objectives of government policies—and the apathy generated by unfulfilled promises—means voters in the region are often disengaged in the process of debating and deciding policy, with little more than a vote to influence the decisions that affect their lives.

But a proliferation of citizen initiatives across policy areas have emerged to change that. In the realm of local governance, one of those is the nonpartisan Red Latinoamericana por Ciudades y Territorios Justos, Democráticos y Sustentables (Latin American Network for Fair, Just and Sustainable Cities and Territories).

Launched in Bogotá in 2008 and now present in more than 70 Latin American cities, including São Paulo, Rio de Janeiro, Lima, and Buenos Aires, the Network comprises hundreds of participating civil society organizations and has become a force for change in the region, demonstrating that urban decay can be reversed.

The aim of the Network is to boost accountability in government, raise the level of public debate, optimize public tax spending, and improve the execution of public policies. Doing so requires high-quality, technical and objective public information and stronger relationships between civil society groups and political parties. While calling on governments to be more transparent, inclusive, effective, and efficient, grassroots civic coalitions are also finding that having active, informed citizens is a better way of ensuring the quality, accessibility and relevance of public goods for all.

The Network boasts some notable achievements. For example, it drew up a confidence-building template that citizens can use to press for more government transparency—known as the plan de metas (target plan)—that holds the mayor or highest-ranking city official accountable for his or her performance according to targets set by citizens. The plans vary by city, but include proposals in each major area of public administration—housing, health, education, and transportation—and require the mayor to provide annual updates on how each of his or her proposed projects is advancing.

The plans have included municipal goals like developing a literacy program, increasing prenatal consultations in the local hospital by 10 percent, or demarcating parking and no-parking zones on particular city streets.

In Brazil, the plans were coordinated by the Rede Social Brasileira por Cidades Justas e Sustentáveis (Brazilian Social Network for Just and Sustainable Cities). In 2012, 550 mayoral candidates committed themselves to the Rede’s monitoring plan for progress toward sustainable development.

In Chile, the Vota programa, no botes tu voto (Vote for the program, don’t throw away your vote) campaign has also proven critical for expanding citizen participation. Financial and technical support from Fundación Avina helped the Red de Territorios Ciudadanos (Network of Citizen Territories) generate a campaign for voters to set municipal priorities and invite political candidates to participate.

Nearly 60 percent of the candidates responded by drawing up a comprehensive platform for voter consideration, which they were then obligated to implement if elected. Twelve of the candidates drew up their platforms after first consulting with local residents.

As the Network continues to grow, Fundación Avina is supporting an online platform that will provide comparative information about cities across the region. Meanwhile, new partners and investors have also joined the effort, including UN-Habitat and the Inter-American Development Bank (IDB) and are promoting their own special areas of expertise among Network initiatives and partners.