The first thing Angélica Dass saw upon entering the world was a camera. The daughter of an avid hobby photographer, the click of the shutter was a common theme in her childhood. So, too, were conversations about race.

Her father is Afro-Brazilian, but was adopted by a white family. Her mother is of indigenous and Afro-Brazilian descent. The 38-year-old photographer has navigated the complexities of identity her whole life.

“I’ve always been singled out because of my skin color. Sometimes I was too white, and other times too black,” Dass told AQ. “But in my house, there was never any difference between colors. My family was multicolored.”

It was this multicolored upbringing and the sting of discrimination that eventually led Dass to create “Humanæ” while studying at Spain’s EFTI in 2012. A series of 4,000 (and counting) portraits, “Humanæ” is a patchwork of human color. Dass uses an 11-by-11-pixel patch from her subject’s face and matches it to the Pantone color palette. The goal? To use the beauty and variance of skin tone to start conversations about identity and equality.

Her project has made everyone from Dutch children to global leaders at the World Economic Forum consider how they view race. But for Dass, the project has always been personal.

“This project was born almost as if I were looking at my reflection,” she said. “I always say (“Humanæ”) is 4,000 self-portraits.”And while it’s offered Dass a global platform to explore the topic of discrimination, one place she feels the tension most is in Brazil, where “Humanæ” has been exhibited just once in its five-year existence. 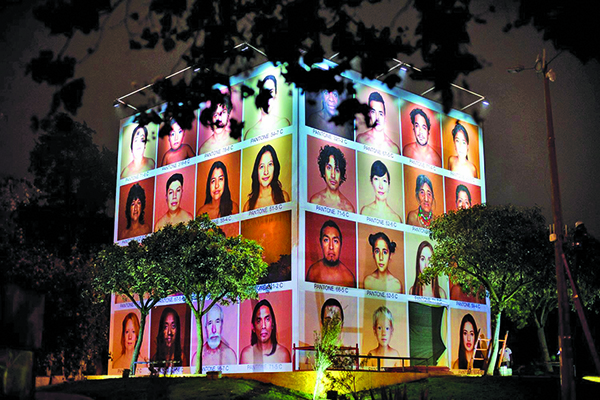 “Humanæ” is projected on a building in Quito, Ecuador.

“I love being Brazilian … but every time I visit, I have to put on armor to live my daily struggle,” she said. “I prepare myself to be confused for a domestic worker or a prostitute.”

For Dass, photography is a way of starting a conversation on a topic that’s often ignored, in Brazil and beyond.

“I’ve discovered that I feel most comfortable being an activist who uses photography as a tool,” she said.

And she’s passing on the baton. Each of her subjects are ambassadors, taking the discussion about “Humanæ,” race and discrimination beyond the gallery walls.

García is the production editor of AQ.

Join AQ Top 5 Art Activists Edel Rodriguez and Lucia Cuba for a discussion on art and activism in New York on November 8.