The gender-based data on social inclusion clearly indicate the opportunities and obstacles facing women in Latin America—as well as numerous contradictions and complexities. An examination of new trends, laws and policies brings to mind the Spanish expression, “Del dicho al hecho, hay mucho trecho.” In other words, even in many areas where there appears to have been significant progress, intervening barriers frequently preclude its consistent application.

These persistent stumbling blocks can include insufficient state resources, an uneven infrastructure, lack of political will, prevalence of patriarchal norms and values, and the extreme socioeconomic inequality that translates into broad divergence in access to services.

Other measures of women’s rights are also complicated within countries. One nation might be notable for its high levels of female representation in political power, yet fall short on policies of concern to women, like reproductive or economic rights.

The growth in women’s presence in legislatures has coincided with important legal advances on women’s rights. Women legislators united in multiparty alliances have been responsible for passing laws on domestic violence, rape, quotas, and the reform of discriminatory civil and criminal codes. Yet the mere presence of women in power will not automatically produce policy outcomes favorable to women’s interests. Like men, women owe primary loyalty to their political parties and to their mearturntors and constituents. Few women are elected to office on a platform of women’s rights. If the interests of the political party contradict the interests of women’s alliances, most women opt to vote with their party.

Finally, levels of poverty, income inequality, unemployment, and underemployment continue to adversely affect wide swaths of the region’s women. The situation is especially dire among rural Latin Americans and those of African descent.

Some areas measured—violence against women, maternal mortality, assistance for working parents, women in positions of political power, and abortion laws—warrant more nuanced analysis. There are emblematic cases from a number of countries that shed light on the topic from disparate vantage points. While each example in no way invalidates the overall indicators, it serves to highlight important markers on the road to progress.

Among Latin America’s most complicated and paradoxical indicators are the laws against domestic violence, sexual harassment and sexual violence—which all countries have on their books—juxtaposed with very low rates of arrest and prosecution. According to UN Women, rapid urbanization (among other factors) in Latin America has led to a significant increase in violence against women. They cite a Pan American Health Organization report showing that one in three Latin American women is abused in her lifetime, and add that among women ages 15 to 44, gender-based violence causes more deaths and injuries than cancer, malaria, traffic accidents, and war. In São Paulo, a woman is abused every 15 seconds; and in Chile, 50 percent of women 15 to 49 have been victimized by their partners.1 Most disturbingly, of the 25 countries in the world with the highest rates of femicide (gender-related killings of women), over half are in the Americas.

Unfortunately, a relatively low number of cases of violence are reported, and an even smaller number are effectively prosecuted. In El Salvador, for example, in the 16 months after passage of a domestic violence law in 2011, officials followed up on only 16 of 63 reported cases. In the first three months of last year, 1,822 rapes were reported in Rio de Janeiro, resulting in only 70 arrests.2 As is the case throughout the world, there remains a troubling gap between the existence of laws to combat this crisis and the state’s ability to enforce them.

An index cannot convey this level of detail in its scoring. For comparative purposes, it is often necessary just to include whether the law exists. Detailing how effectively it is applied is often too subjective—but obviously is key. Yet also telling is the extent to which governments provide the information on violence against women and prosecution rates.  Here—as the previous index indicates—even in this simple but crucial measure governments are severely lacking, with Paraguay and Uruguay not providing any information. The most recent data available for Bolivia are from 2003, and for Colombia from 2005.

The contrast between women’s rights and political representation is also evident in the area of reproductive rights. The region is still home to some of the most draconian anti-abortion laws in the world. While abortion rights have made inroads in some countries, the number of unsafe procedures still exceeds 95 percent of instances of abortion.3 Even in countries where abortion has been largely decriminalized, such as Colombia, a majority of women still lack access to safe, legal procedures. Many women seeking abortions (or even some of those suffering miscarriages), as well as health care providers, have been arrested, incarcerated or otherwise persecuted. Illegal abortions are among the leading cause of maternal mortality for women in many parts of the region.

Factors responsible for the high rate of unsafe abortions in the region include inadequate sex education and lack of access to contraception. According to UN data, unmet family planning needs hover around 10 percent in most countries surveyed for this index—including in the Dominican Republic, Jamaica, Mexico, and Nicaragua—and as high as 14 percent in Honduras and 18 percent in Bolivia. Access to contraception is crucial to a woman’s ability to determine her economic future and avoid the need to seek an abortion. The consequences of unsafe abortion, including high maternal mortality, have a disproportionate effect on poor and rural women.

In other areas, public policies on women’s rights have taken ironic and sometimes contradictory forms. For example, under the presidency of former revolutionary Daniel Ortega, Nicaragua has a progressive quota law and one of the highest percentages of women in positions of political power in the region. At the same time, the country’s total ban on abortion ranks among the strictest in the world. Similarly, under Ecuador’s leftist leader Rafael Correa, the number of women in the legislature has dramatically risen. But when progressive members of his governing alliance proposed decriminalizing abortion last year, the president called them traitors and threatened to resign.4 Conversely, Uruguay—the Latin American nation that most recently legalized abortion in 2012—has a relatively low level of female representation in government. Nor does the presence of women in political power guarantee outcomes favorable to women. Over the past decade, countries that have had women presidents (e.g., Argentina’s Cristina Fernández de Kirchner, Chile’s Michelle Bachelet, Costa Rica’s Laura Chinchilla, and Brazil’s Dilma Rousseff) have taken no greater steps toward legalizing abortion than have their male-led counterparts.

Likewise, there is no correlation between rates of women’s representation in political leadership or level of economic development and policies regarding maternal or paternal leave. In fact, such policies may have more to do with the statist bent of Latin American countries or labor-friendly governments than a progressive approach to women’s rights. Most countries in the region have more generous paid maternal leave policies than does the United States. But this tells us nothing about implementation of those policies.

Complexities and idiosyncrasies notwithstanding, gender-based measures of social inclusion provide a critical lens for examining the quality of women’s lives. As vehicles for reporting data become more widespread and accessible, the region’s leaders, its residents, and the international community will become increasingly aware of each country’s progress and remaining challenges. And those that fail to collect gender disaggregated data in a timely manner will become obvious outliers. More information will lead to more pressure from above and below, and the gap between “el dicho y el hecho”—words and deeds—will most certainly narrow.

PARENTAL LEAVE IN THE AMERICAS 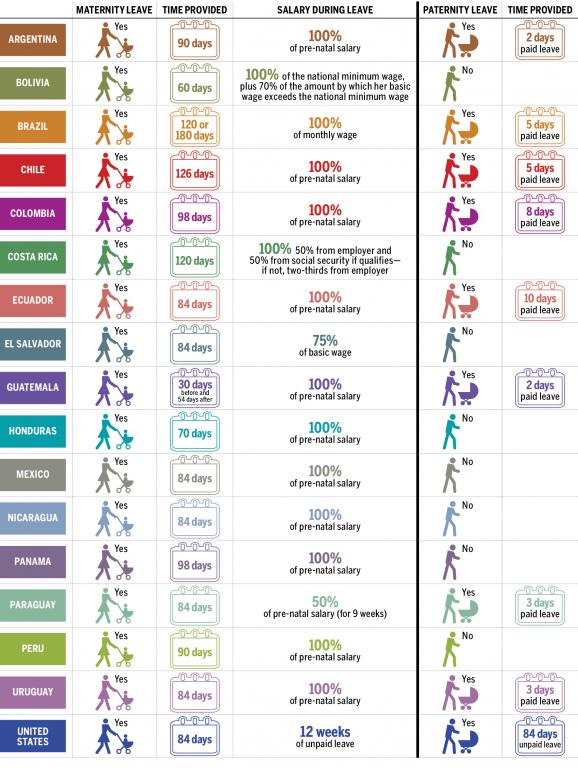 View an expanded version of the figure.