Dilma Rousseff. Laura Chinchilla. Cristina Fernández de Kirchner. Michelle Bachelet. The political successes of these women should not divert our attention from the sizeable gender imbalance in politics that exists across the region. Slightly more than half of all Latin American citizens are female, but women occupy only one of every seven seats in legislatures—and only one of every 20 mayoral posts in the region.

In fact, the existence of a presidenta appears to tell us little about how women fare politically in her country.

Although Dilma Rouseff holds Brazil’s highest office, only 8.8 percent of federal deputies in Brazil are women and only 14.3 percent of ministers are women. This is far behind the rest of the region. And despite Michelle Bachelet’s success in Chile, women’s representation in Chile’s national legislature is below the regional average. [See Table 1] Women have made tremendous gains since the 1970s, when women’s representation in Costa Rica’s national assembly (at a mere 7 percent) was the highest in the region, and when five countries filled less than 1 percent of their legislative seats with women. The most striking changes in women’s legislative representation have come since 2000—not coincidentally, after the majority of Latin American countries adopted gender quotas during the late 1990s. 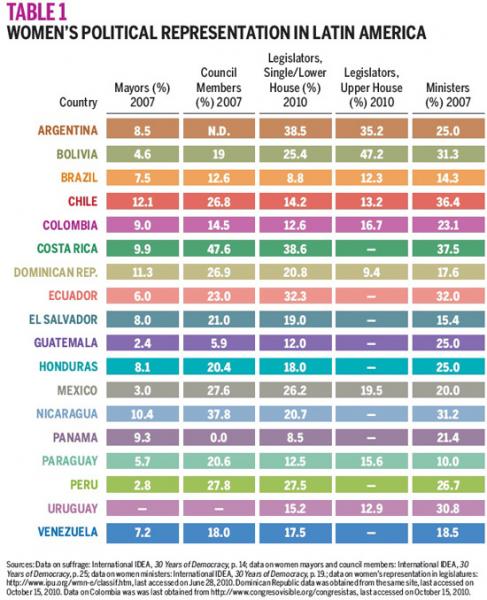 But even in 2010 only one of every five national legislators is a woman.

In executive positions both elected and appointed, women have fared better. A female minister was a rare sight even in the 1990s; today, women routinely occupy ministerial posts. Chile’s Michelle Bachelet named the first cabinet in which females and males were equally represented just a few years ago.

Isabel Perón, the incompetent young widow of Juan Perón who was unable to fill the role that Evita had played so well, became the first female president in 1974. Two decades later in Nicaragua, another widow of a prominent personality, newspaper publisher Violeta Barrios Torres de Chamorro, stepped into the presidential office. Only in the last few years, however, have we seen women without family connections elected president of Latin American countries. But there is still great variation across the region…