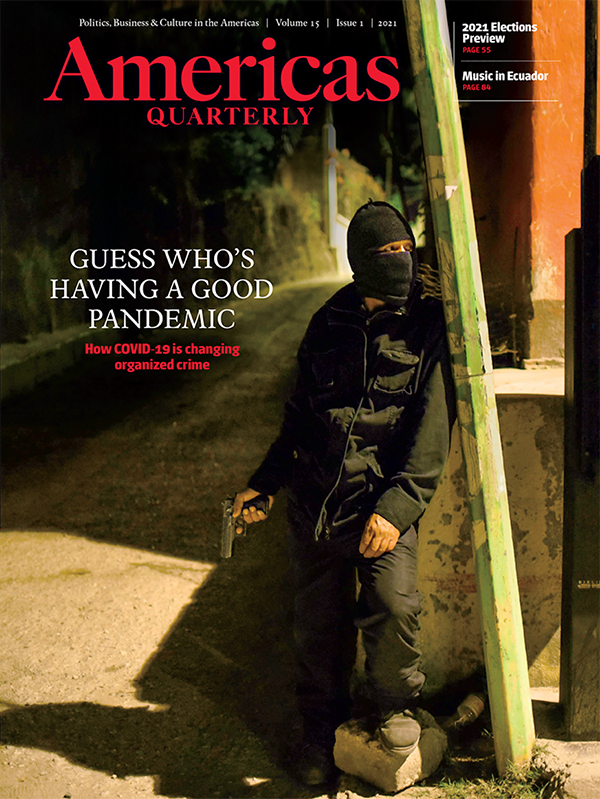 COVID-19 has been a bonanza for organized crime. Greater international coordination could ease at least some of the damage.

School’s Out in Latin America. Gangs Are Thrilled.

By JOHN OTIS
With 97% of Latin American kids out of class, some criminal groups see a surge in recruitment.

By JOSÉ MIGUEL CRUZ and BRIAN FONSECA
An overview of the region’s challenges, and what governments can do about them.

The region’s criminal groups are increasingly sophisticated. AQ profiles some of the most visible.

By CECILIA TORNAGHI
If you want to fight organized crime, defund it.

When Politics and Crime Collided in Peru

By LUCÍA DAMMERT
The rise and fall of a powerful governor allegedly shows the influence of criminal groups.

The Threat That Cannot Be Addressed Alone

By ANDREW J. TIONGSON
Combating organized crime in the Americas requires cooperation among the hemisphere’s countries.

Under Biden, Big Changes on Drugs and Crime Seem Unlikely

By BRENDAN O’BOYLE
A December report could lead to some modifications of U.S. anti-drug policy, but no dramatic steps.

By ALAN VERMAUT
There is hope for combating illicit trade in 2021, but we have to act together.

A closer look at the leading candidates in this year’s presidential elections.

By LEONIE RAULS
Enrique Samayoa is confronting the effects of climate change with traditional farming practices.

Photo Essay: A Year of Change on the Paraná River