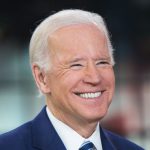 Joe Biden heads the Penn Biden Center for Diplomacy and Global Engagement at the University of Pennsylvania. He served as vice president of the United States from 2009 to 2017, where he led U.S. policy toward Latin America and the Caribbean on a range of key issues. He previously served as the chairman and ranking member of the Senate Foreign Relations Committee and represented Delaware for six terms in the United States Senate.