It’s 8 a.m. on a rainy Monday morning in Argentina, and Captain Humberto Duarte is stuck in traffic. A tugboat pushing 16 barges laden with soybean is taking an age to pass under the bridge that spans the river here at Corrientes on the Paraguay-Paraná hidrovía (waterway). The captains of nearby ships voice their frustration over the radio.

Eventually, it’s time for Duarte’s container ship, the Anabisetia, to negotiate the narrow channel between the concrete struts. Alberto Capdevila, the pilot, deftly manages the controls, factoring in high winds and the strong current, and steering clear of a submerged wreck and the bridge’s supports. Duarte breathes a sigh of relief. “With a boat as heavy as this one, if you hit one of those pillars, you’re going down.”

Stretching over 2,100 miles on the Paraná and Paraguay rivers from Nueva Palmira, Uruguay, to Cáceres in Brazil – via Argentina, Paraguay and Bolivia – the hidrovía is a major commercial artery, with agricultural produce and metals coming downstream, and manufactured goods and fuel going back up.

The Italian explorer Sebastian Cabot and countless European conquistadors once sailed up this stretch in search of El Rey Blanco, a local variant of the El Dorado legend. Gun-toting steamships once flanked its banks. Today, perhaps as many as 4,000 barges, tugs and container ships shuttle up and down the hidrovía. The route is arguably better for the environment than relying on the region’s substandard road network: one 1,500-ton barge can carry the same amount as 60 trucks. But the route remains beset by challenges that reflect the complicated relationships between the economies it connects. I made the ten-day journey by boat upriver from Montevideo to Asunción, Paraguay, with this question in mind: does the hidrovía offer an example of these countries, some of them historical enemies, finding a way to work together? 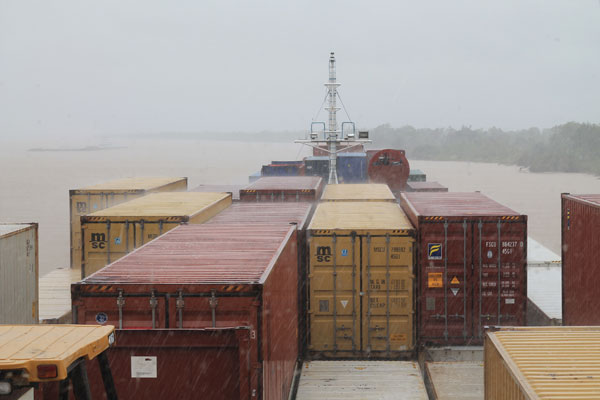 A rainstorm on the Río Paraná.

“Diplomatically, you’re going to hear ‘yes’,” said Mónica Navarro, the CEO of Grupo Vessel, from her office in Buenos Aires. Grupo Vessel’s fleet of nine ships ferries containers up and down the hidrovía. “But the reality is that we don’t have a concrete agreement on competitiveness … each country tilts for their own windmill.”

Governments have formally agreed to apply uniform regulations and costs for businesses using the waterway, but in practice that is far from the case. Taxes and regulations in Argentina have made the cost of keeping and maintaining a fleet there far more costly than in Paraguay, for example. Navarro notes that taxes on profit in Argentina are around 35 percent, while in Paraguay the rate is just 10 percent. An Argentine company, Grupo Vessel registered in Paraguay four years ago. “We found a very warm reception, open to receiving investment. We repositioned ourselves there, and we continued to grow,” she said.

As a result of these imbalances – part of broader failures of integration within Mercosur, the regional trade bloc – Argentina’s shipping industry and ports have almost come to a standstill. That goes some way in explaining why working together to make the hidrovía more efficient – and lucrative – isn’t always a priority. But my trip upriver would also show me that cooperation is slowly becoming more ingrained, to everyone’s benefit.

To get to the hidrovía from Buenos Aires, I take the latest addition to the Buquebus fleet – the Francisco – across to Montevideo. Here, the commercial port (divided between Montecon, a local company, and Katoen Natie, a Belgian one) is buzzing with activity. “Obviously the river route is competitive, far more so than taking things by land,” said Teresa Aishemberg, head of the Uruguayan Union of Exporters. “We presented a list of our objectives to the ministry of transport, (including) a deep-water port, trains, improvements to some of our ports. And they’re working on it.”

There are still hold-ups. The Anabisetia, which I’m due to take upriver, has to wait a week before being unloaded. Part of the problem is that Montevideo’s port is too small to absorb all the business that used to go to Buenos Aires. “They need to take measures so that the ports in Buenos Aires and Montevideo complement each other, rather than competing,” Aishemberg argued. A decade of Argentine protectionism has weakened ties between Uruguay and Argentina, noted Gaby Castro-Fontoura, a Uruguayan business analyst. With the election of President Mauricio Macri, “you can definitely notice they’re opening up,” she adds. But she offers an example of how Mercosur’s limitations are visible along the hidrovía: “If you go to any supermarket in Uruguay and look for one thing produced in Paraguay, you won’t find anything.” 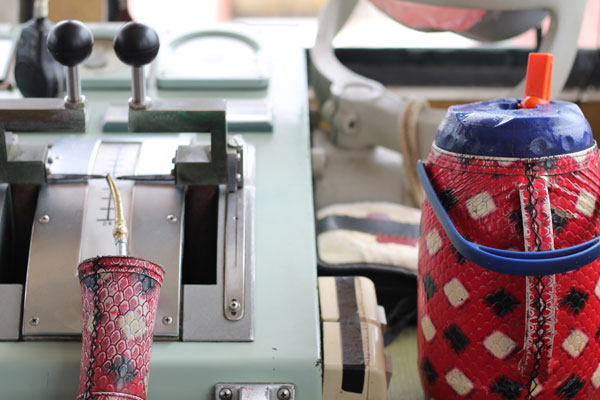 A gourd of tereré rests on the controls of the Anabisetia

The Anabisetia is eventually loaded with its cargo – around 150 containers of electronics, chilled foodstuffs, and a second-hand earthmover – and sets off upriver, after first crossing the sea-like expanse of the Río de la Plata. At times, the journey seems idyllic. The ship moves at a leisurely 5 miles per hour through the green expanses of Argentina’s pampas. The faded grandeur of Rosario and Corrientes, evoked in Graham Greene’s 1973 novel The Honorary Consul, sits alongside gleaming soybean silos and bulky ships registered to distant countries like Liberia, Vietnam and the Marshall Islands. The ship’s 12-man crew – all Paraguayans – enjoy a traditional asado on deck on Sunday.

But for Captain Duarte, who spent some 30 years in Paraguay’s navy, the voyage comes with plenty of stress. Heavier ships have to stick to navigable channels that change over time, and hidden sand banks are a constant risk. Despite all the high-tech equipment on the ship’s bridge, on several occasions we have to lower a dingy to take soundings of the river ahead. At particularly shallow or narrow points the boat pauses overnight, in order to tackle them in daylight. “Sometimes the crew want to keep going,” the captain tells me over the sound of radio chatter in Guaraní. “But I always say it’s better to wait for six hours than to lose three days” – the time it can take to get the boat moving again if it runs aground.

The responsibility for dredging the river channels until the beginning of the Río Paraguay, the busiest section of the hidrovía, rests with Argentina. The burden is a cause of resentment for Argentina, which uses the hidrovía far less than its neighbors, particularly Paraguay. But Duarte reports that cooperation between the two countries’ naval prefectures, which monitor the route, is improving. “In our daily routines we don’t really hear much about the diplomatic problems,” he said. Anti-narcotics efforts are another area of cooperation: in December, Argentina’s police force and Paraguay’s anti-drug unit agreed to join forces to tackle the flow of marijuana and cocaine downriver. 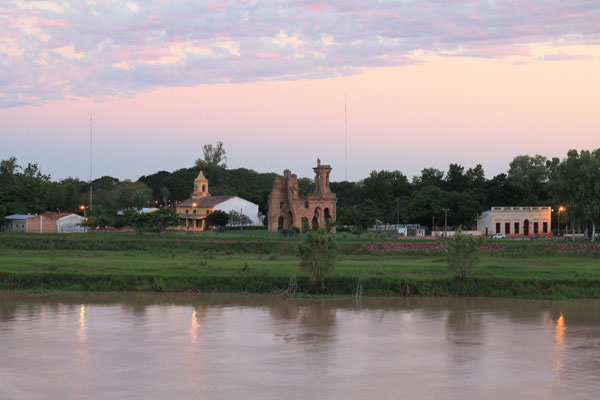 The church at Humaitá, shelled during the Triple Alliance War

Moving up the Río Paraguay, the Anabisetia passes the battlefields of Curupaytí and Humaitá – the scene of a bloody defense by Paraguay against the combined forces of Brazil, Argentina and Uruguay in the War of the Triple Alliance (1864-70). Brazil emerged from the war as the region’s strongest power, and, for some, its reluctance to commit more effort and resources to the hidrovía is responsible for the route’s shortcomings. “They have an imperialist policy to suit themselves,” Aishemberg argued. “Often, everything is slowed down by decisions taken in Brazil.”

But in an emailed response to questions, Ambassador Eugênia Barthelmess of Brazil’s foreign ministry defended Brazil’s record. She noted the country’s “active” participation in every meeting of the Intergovernmental Committee and the Agreement Commission, the two intergovernmental bodies which have managed the hidrovía since their founding in the 1990s. She said that Brazil viewed the waterway as a “fundamental route for trade and regional integration” and highlighted the country’s efforts to attract private investment to improve the ports along the waterway. 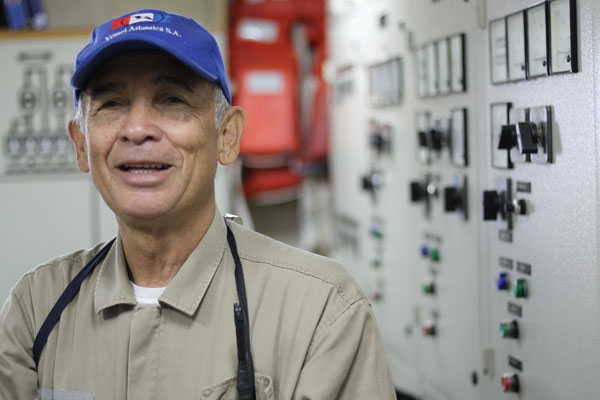 Captain Humberto Duarte in the engine room of the Anabisetia

The Anabisetia docks at several of these new, privately-managed ports, ending up at Puerto Fénix, just north of Asunción. Here, Duarte and half of the crew will have less than 24 hours at home before embarking once more downriver for Montevideo. The long periods away from home make it difficult to hold down a relationship or start a family, the 33-year-old Capdevila told me, but there are few well-paying jobs in Paraguay – “Unless you go into politics.”

The journey from Montevideo to the hidrovía’s midpoint at Puerto Fénix offered plenty of evidence of the disparities between the countries in the region, exemplified by Paraguay’s threadbare ports, shallow river channels, half-empty cargo ships, and the predominance of cheap Paraguayan labour. Some of these imbalances might be impossible to resolve: Brazil’s objectives as a continent-sized power will inevitably be different from those of Uruguay or Paraguay. “There’s a very, very delicate equilibrium between the five countries,” Luis Pablo Niscovolos, the executive secretary of the Intergovernmental Committee, told me in his office across the street from Argentina’s foreign ministry in Buenos Aires. But he argued that inter-governmental cooperation on the hidrovía was improving, particularly since new administrations took power in Brazil and Argentina in 2015 and 2016.

“There’s an important, promising level of cooperation, and I think that expectations are growing,” he added. “But you can’t expect results overnight, and we want our juridical and natural infrastructure to develop in a careful way.” The cautious pace of discussions might be a blessing in disguise – plans that emerged in the late 1990s to alter the course of the hidrovía in dozens of places, easing the flow of shipping but potentially damaging rare habitats in the process have since been stalled. 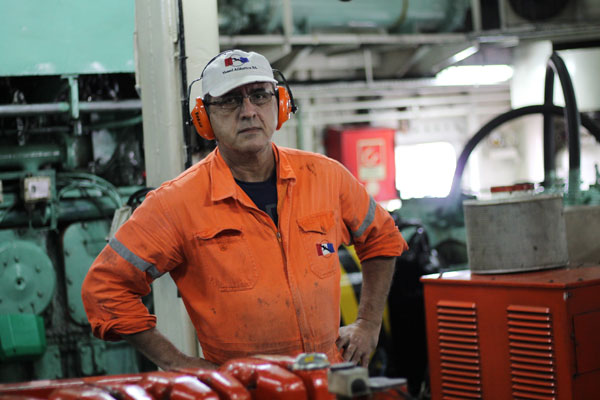 Some estimates nevertheless suggest that the annual volume of merchandise shipped on the hidrovia could double from recent levels (just under 40 million tons, up from 0.7 million in 1988) within a decade or two, particularly as Brazil and Argentina’s economies bounce back from their recent slowdown and if international prices for soy and minerals pick up. For better or worse, it seems like the waterway dubbed “the river of silver” by the conquistadors will only grow in importance. Even if regional governments are able to cooperate more closely in managing the river, Captain Duarte and his crew can expect more traffic jams.

Blair is a freelance journalist based between London and Latin America. He is currently writing a book on South American history due for publication with Bodley Head/Penguin Random House in 2018. Follow him on Twitter at @LABlair1492.


Tags: Infrastructure, Paraguay, trade
Like what you've read? Subscribe to AQ for more.
Any opinions expressed in this piece do not necessarily reflect those of Americas Quarterly or its publishers.