On April 18, as the sun rose high into the sky, a group of several dozen Central American migrants marched along with the Viacrucis Migrante (Migrant Stations of the Cross) towards the Basílica de Guadalupe in Mexico City. The group, led by migrant outreach activist Padre Alejandro Solalinde, sought to draw attention to the problems faced by Central American migrants as they cross through Mexico.

“Viva Guatemala, Viva Honduras, Viva El Salvador, Viva México!” the crowd following Solalinde chanted. In the procession, a tiny toddler shouted into a megaphone, “We are international workers, not criminals!”

View a slideshow of the march below.

Last year, Central American migration to the U.S. shot up to record-breaking levels as young people fled poverty and economic stagnation in their home countries—and more recent problems of crime and gang violence. During 2014 alone, more than 68,000 unaccompanied minors from Central America were detained at the U.S. border. In 2015, that number is expected to drop to 37,000.

Migrants have long known that crossing the border to the U.S. is dangerous and difficult, but now they face new challenges south of the U.S. border.

In July 2014, Mexican President Enrique Peña Nieto announced a new initiative called the Programa Frontera Sur (Southern Border Program), which was designed to beef up security along Mexico’s notoriously porous southern border with Guatemala. Mexico detained and repatriated more than 25,000 Central Americans in the first two months of 2015 alone. The increase in deportations of northbound Central American migrants by Mexican authorities is part of the reason why apprehensions at the U.S. border are declining.

Leonel Méndez, a 17-year-old from Tegucigalpa, Honduras, joined up with Solalinde’s movement while trekking north to try to cross to Houston, where his uncle lives. He said Mexican authorities took him to a detention facility in Tapachula, a city in southern Mexico, the previous month before deporting him back to his home country. “There were 500 migrants [in detention] […] people from all over Central America,” he recalled.

Undeterred by his first unsuccessful attempt, Méndez is trying to cross through Mexico again, this time with  the Viacrucis Migrante. “My country is going through a difficult situation,” he said. “In Central America, we need jobs more than anything, and security. I left because it’s so dangerous.” 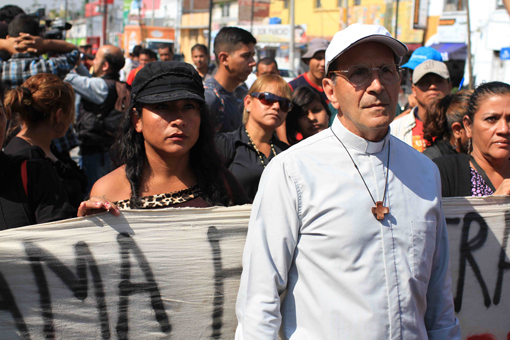 Levels of Mexican migration to the U.S. have declined to net zero in recent years, but Central American migrants still see Mexico as a fellow sending country and are frustrated with Mexican authorities’ recent crackdown on migrants.

“There are a lot of people still leaving, but now, if you want to get to the U.S., the problem is Mexico. They are detaining and deporting a lot of people,” said Ariel Paz, a 28-year-old from Guatemala.

Paz said that he had made it to the U.S. once before, but was detained and deported back to his home country in 2010.  He tried to make a life for himself in Guatemala, starting his own business—but extortion from criminal gangs eventually forced him to head north again. “If you don’t pay, they will kill your family members,” Paz explained. “Where I lived, a lot of people had to close their businesses because of this.”

U.S. President Barack Obama has asked Congress for a $1 billion dollar aid package that is designed to addressed the root causes of poverty and crime in El Salvador, Guatemala and Honduras, but in the short term, migrating north is still the best option for many Central Americans facing the threat of violence and few job opportunities in their home communities.

Solalinde has spoken publicly throughout the campaign about Mexico’s new policies and the challenges facing migrants. “I’m not fighting the authorities…I’m fighting injustice,” he said.

All photos courtesy of the author.


Tags: Central American migrants, Immigration, Mexico
Like what you've read? Subscribe to AQ for more.
Any opinions expressed in this piece do not necessarily reflect those of Americas Quarterly or its publishers.