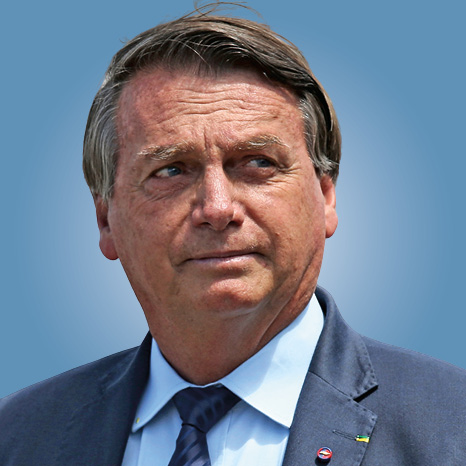 Dubbed the “Trump of the Tropics,” the former army captain has been widely criticized for his handling of the pandemic and rising deforestation in the Amazon. He was elected on the promise of pro-market reforms, but few have passed Congress and Brazil’s economy remains smaller on a per-capita basis than a decade ago. Bolsonaro met with President Vladimir Putin in Russia a week before the invasion of Ukraine, citing the need for an accord on fertilizers. Campaigning for reelection in October, Bolsonaro gets high marks from supporters for his handling of security (homicides have fallen to their lowest level in more than a decade) and social issues (his recent Supreme Court pick pleased Evangelical Christians), but he still trails his biggest rival, former President Luiz Inácio Lula da Silva, in polls. Some observers fear Bolsonaro could attempt to overturn the election if he loses, pointing to his repeated clashes with the Supreme Court and comments questioning the integrity of Brazil’s electronic voting system.

*NOTES: Approval rating updated May 6. Support for democracy reflects percentage who agree that democracy is preferable to any other form of government.


Tags: Brazil, Jair Bolsonaro
Like what you've read? Subscribe to AQ for more.
Any opinions expressed in this piece do not necessarily reflect those of Americas Quarterly or its publishers.
Sign up for our free newsletter