The end of war hasn’t released Colombia from the grip of violence. Homicide rates have fallen in the 12 months since the Revolutionary Armed Forces of Colombia (FARC) agreed to a permanent ceasefire, but other forms of victimization have started to rise. More than 50 social leaders have been assassinated since the beginning of the year. And, taken together, the parts of the country traditionally most affected by conflict have actually experienced an increase in the murder rate.

Understanding what is driving these dynamics is critical to designing effective solutions and sustaining the peace process. That requires an unvarnished look at how violence has changed since the FARC began to demobilize.

First, the good news. The peace process has without doubt helped reduce some kinds of violence in much of the country: Overall, homicides fell by 6 percent in the first half of 2017 compared to last year. Other types of violence deployed by armed groups also declined significantly over that period, including threats (down 35 percent), extortion (43 percent), terrorism (52 percent), and kidnapping (18 percent). To be sure, these improvements are not a result of the peace process alone, but rather an assortment of public security measures. 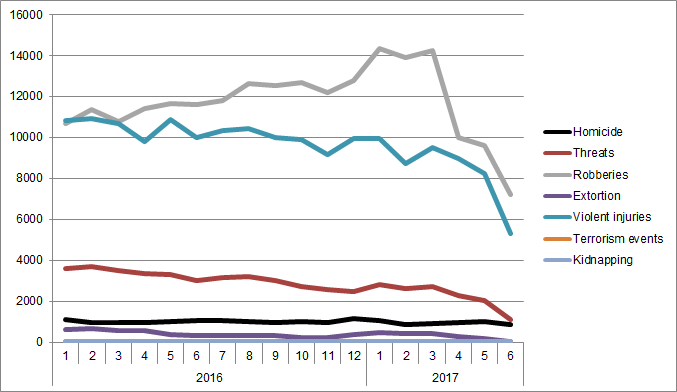 But despite overall improvements, violence in Colombia is transforming in ways that may threaten the long-term stability of the peace process. While lethal violence is falling in most urban centers and even some individual areas traditionally affected by conflict, homicides in former conflict zones overall have increased by 15 percent. As the FARC withdraws from these areas, new criminal factions are filling the void. One such group – the Gulf Clan – is already present in the departments Antioquia, Córdoba, Chocó, Nariño, Valle de Cauca and Caquetá.

As groups such as the Gulf Clan consolidate power, their first order of business is usually to wipe out the competition. Take the case of Caquetá, where a spike in violent competition between the Gulf Clan and Colombia’s remaining armed guerrilla faction – the ELN – has led to a 67 percent increase in homicidal violence in the first six months of the year. The situation of Chocó, a poorer area in the Pacific coast, is no better.

There has also been a sharp increase in targeted assassinations of community leaders, environmentalists, journalists and human rights defenders across Colombia. Since they are often the first to report on rights violations, they are considered a threat to criminal and paramilitary factions. More than 50 such killings have occurred already in 2017.

These trends highlight a frequent truth about post-war society: The end of war is seldom followed by the flourishing of peace. Post-conflict settings are often affected by an upsurge in organized violence, often of the criminal variety, such as in Guatemala and El Salvador.

This surge in post-conflict violence should not come as a surprise. The institutions designed to sustain peace are often quite fragile and prone to disruption. Peace agreements routinely fail. Of the hundreds of power sharing agreements signed around the world between 1989 and 2006, at least 50 percent of them collapsed within five years of being signed.

Indeed, post-war societies are predisposed to the use of instrumental violence to resolve simmering disputes. Retributive violence following negotiated settlements is common. Societies exposed to sustained turbulence may become inured to, or even accepting of, violence. This also may help explain why intimate partner violence can rise at war’s end (another reason may be that it is better reported).

Large numbers of young unemployed youth, especially ex-combatants, can also spoil the peace. This is why programs to disarm, demobilize and reintegrate ex-guerrillas and former soldiers are such an essential part of ending conflict. This is especially the case in Colombia, where as many as 7,000 FARC rebels have put down their arms.

All this is not to say that peace agreements are not worth pursuing. Even when wars restart after a peace deal, they can be 80 percent less violent than the conflicts that preceded them. And in Colombia’s case, there are myriad reasons to believe the process can be successful.

But the peace process must be given a chance to succeed. A final reason that surges in post-peace violence can be dangerous is that they fuel political polarization and can even undermine peace altogether. Indeed, reports of a crime wave have already led opponents of the peace deal to stoke fears among their constituents. Yet in contrast to past international experience, the remarkable thing about the Colombian situation is how limited such violence has been. 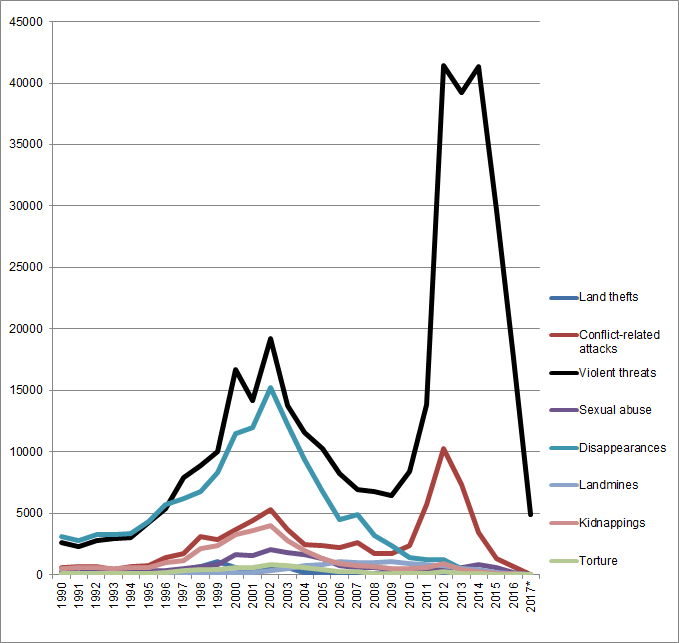 Given that context, an informed debate about the causes and consequences of post-war violence is all the more vital. To be sure, the international community and Colombian authorities need to keep their eyes firmly on the peace process, and in particular the FARC. But there are overlapping forms of violence in the country. Cities are experiencing declines in lethal violence (and increases in street crime) while rural areas are witnessing a sharp increase in murder. If the motives of this violence are misdiagnosed, Colombia risks losing the peace altogether.

Muggah is co-founder of the Igarapé Institute and the SecDev Group.

Aguirre is a researcher at the Igarapé Institute.