On July 1, Mexicans will elect their third government since the Partido Revolucionario Institucional (PRI) relinquished their grip on Los Pinos after 71 years ruling the country. But as election day approaches, anxiety and polarization continue to grow among both the electorate and political class. More importantly, this uncertainty stirs concern about the future of democracy. Beyond electing a new executive and legislative branch, this election will test Mexico’s democratization process.

With four weeks of the campaign remaining, PRI candidate Enrique Peña Nieto remains the frontrunner. (SEE TABLE 1) He has lost less than five percentage points since the official campaign began on March 30, in an effort largely free of both mistakes and substance. Josefina Vázquez Mota, candidate of the incumbent Partido Acción Nacional (PAN) and the first woman to run for president for a major national party, has also lost five percentage points since then in a campaign riddled with gaffes. Second-time challenger Andrés Manuel López Obrador (AMLO) from the Partido de la Revolución Democrática (PRD) is the only candidate who has gained some additional momentum—as much as seven percentage points—by conveying a message of tolerance on the stump. This was necessary for his political brand, after being blamed for sparking national polarization when he narrowly lost (by less than one percentage point) the 2006 election to President Felipe Calderón (PAN). 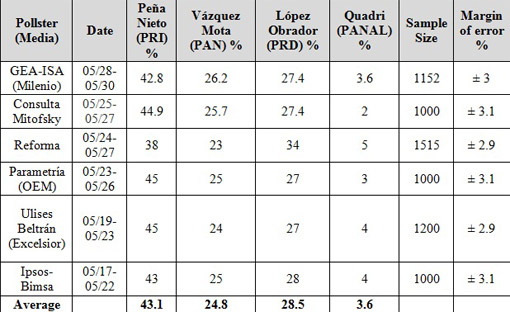 Tabulated by the author, with data from ADNPolítico.com.

Peña Nieto has managed to preserve his telegenic image and leads his closest rival by almost 15 points: 43.1 percent to 28.5 percent. Trailing candidates desperately need major boosts to their candidacies. Although these gains seem unlikely, some challengers have tried to make-up some ground by attaching themselves to student calls for a more vibrant democracy. Still, these student protests—led by the Mexico City-based #Yosoy132 operation—refuse to openly support any presidential candidate.

López Obrador, the distant second-place candidate, is attempting to attract the anti-PRI vote by positioning himself as the most viable alternative candidate. However, polls suggest that the PRI’s centrist position makes Peña Nieto the second choice for a majority of voters from both the Right and Left. While 20 percent of the electorate remains undecided, these voters are less likely to turn out on election day or to alter the current scenario by supporting a single candidate.

Beyond the presidential contest, the most relevant issue this election season is the majority of seats in Congress that the PRI is expected to gain. All 628 seats in Mexico’s bicameral congress are up for election: 500 in the lower chamber and 128 in the upper chamber.

The PRI-led coalition, which includes the Partido Verde Ecologista de México (PVEM), is currently leading the congressional polls with 49 percent approval; the PAN and the PRD are tied at a distant 25 percent. In the current Congress, the PRI coalition holds 265 seats in the lower chamber; the PAN has 140 seats and the PRD holds 70. In the Senate, the PRI holds 39 seats, trailing the PAN (49 seats) but leading the PRD (22).

If the polls hold true on election day, the PRI and PRD would increase their presence in Congress while the incumbent PAN would lose seats. Entirely focused on the presidential race, the PAN and PRD are missing an opportunity to close the gap in congressional seats instead using legislative campaign resources for their presidential candidacies.

While divided government has often been the status quo in U.S. politics—playing a role in ensuring accountability and checking the executive branch’s power—it has been an Achilles’ heel for Mexican democracy. Cooperation between the executive and legislature is possible on some issues, but congressional gridlock hinders the passage of important reforms to the tax system, labor market and energy sector. The PRI is running this year on the basis of overcoming this problem.

But optimism for reform should be guarded even though a Peña Nieto government would have a better chance to build centrist legislative coalitions.

The reforms that the PRI is proposing on the campaign trail are the same ones that priístas rejected during the current administration. In the case of labor reform, the Calderón administration actually accepted an initiative that the PRI initially proposed in March 2011 but then refused to support. The reform would make the labor market more flexible by recognizing new forms of hiring and temporary contracts and regulating outsourcing. The challenge is that a non-democratic corporatism is still the foundation of the PRI, with unions opposing change in both the private and public sectors—including at large organizations such as Petróleos Mexicanos (PEMEX), Confederación de Trabajadores de México (CTM) and Confederación Regional Obrera Mexicana (CROM).

However, with a majority in Congress, the PRI will be able to approve the budget even with dissent from the opposition; they will control congressional auditing of government; and they may unilaterally approve changes to any law except for constitutional amendments which need approval from other parties. The challenge for Mexico’s democracy is whether any party that controls both the presidency and the legislature will govern in accordance with the new laws and institutions of democracy created over the last decade: the Institute of Access to Public Information (2003); the civil service reform (2004), improvements to free speech (2007, 2009, 2012), and the increased emphasis on human rights (2011), among others.

There are few hopeful signs in the party’s behavior. PRI governments at the local level remain among the most corrupt and ill-governed: 8 of the 10 most debt-ridden states and 7 of the 10 most corrupt states are governed by the PRI. However, media outlets, the judiciary, the central bank, and the electoral institute at the federal level are autonomous institutions. Civil society remains vibrant. Municipalities, which are the backbone of national government, do not depend on the central government anymore. Overall, fundamental aspects of democracy that were not previously present in Mexico may ensure that democratic gains continue no matter which party is in power.

Checks and balances, though weak, are still greater now than they were before 2000. Laws approved during Vicente Fox’s presidency (2000-2006) ensure greater transparency and rationality in the public service and broaden the role of Congress. These would limit the authoritarian impulse of the next president in the same way as with the current and previous officeholders.

The test for Mexican democracy is not whether it will allow the PRI to win the presidency next month, but if the institutions developed in the last decade are capable of fostering democracy regardless of the ruling party.

Like what you've read? Subscribe to AQ for more.
Any opinions expressed in this piece do not necessarily reflect those of Americas Quarterly or its publishers.
Tags: Andrés Manuel López Obrador, Enrique Peña Nieto, Felipe Calderon, Josefina Vázquez Mota, Mexico, Vicente Fox