A special thanks to Nexo, which first published this piece in Portuguese.

“House of Cards” has inspired a political science class in Chile, the meme #CasadeNaipes in Argentina, and the parody “House of Narcs” in Mexico.

But Netflix’s political series has hit a special nerve in Brazil. President Dilma Rousseff is fending off record-low popularity and calls for her impeachment or ouster, a massive corruption probe is entangling top political leaders and businesspeople, and politicians generally “act in ways that the writers of ‘House of Cards’ would find utterly implausible,” as AQ’s editor-in-chief has observed.

The comparisons between “House of Cards” and life in the capital Brasília are highlighted regularly in local news and on social media, to the point where the show’s lead character Frank Underwood (played by Kevin Spacey) has acknowledged his Brazilian fanbase on Twitter, saying: “In Brazilian Portuguese, they don’t say ‘impeachment,’ they say ‘se inspirar no Francis Underwood,’ and I think that’s beautiful.”

Ahead of the March 4 premiere of “House of Cards” season four, the Brazilian media site Nexo produced a 10-question quiz challenging readers to separate the show from real life. Nexo gave AQ permission to reproduce the quiz here in English.

1. After losing a vote on an important bill, a politician maneuvers to put the text, with small changes, up for another vote. On the second attempt, he wins and angers his rivals. 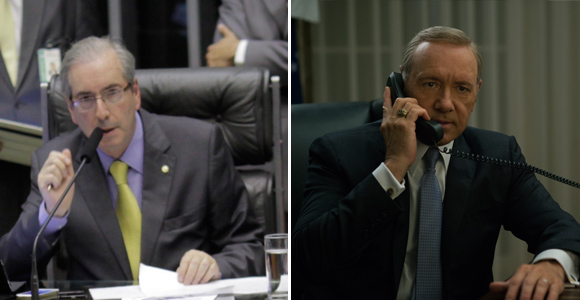 This happened in Brazil, July 2015. The protagonist was the president of the Lower House, Eduardo Cunha (PMDB). After a bill to reduce the age of criminal responsibility from 18 to 16 was defeated, Cunha coordinated with political parties, added amendments and reintroduced the bill the next day, getting approval. The same maneuver had been used a month earlier to approve a proposal to allow private campaign funding in elections. The reduction of the age of criminal responsibility is still under discussion in Congress.

2. A member of the ruling government quits and decides to run for president. 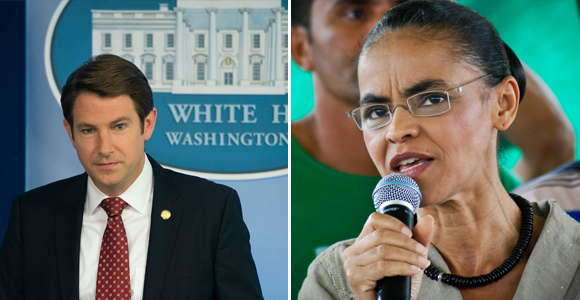 This happened in both the “House of Cards” third season and Brazil. In the series, the former attorney general Heather Dunbar quits her post and decides to run as a Democrat in the presidential election, competing in the primary against Frank Underwood. In Brazil, the reference is to Marina Silva, a former member of the Workers’ Party (PT) and minister in the government of former President Luiz Inácio Lula da Silva. She ran for president in both 2010 and 2014 against the PT candidate, Dilma Rousseff.

3. An important businessman who has a good relationship with the president is arrested amid a political crisis. 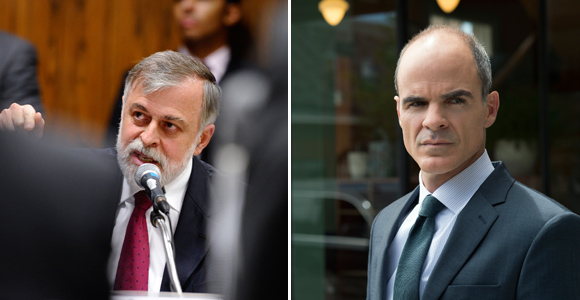 This happened in Brazil, June 2015, and the “House of Cards” second season. In Brazil, businessman Marcelo Odebrecht, president of the construction company that bears his name, was arrested in June 2015 as part of Operation Lava Jato. His company is accused of participating in a kickback scheme involving Petrobras contracts. In “House of Cards,” Raymond Tusk, the manager of a nuclear power company and an adviser to President Garrett Walker, is arrested after providing testimony that contributes to the president’s resignation.

4. Despite falling approval ratings, a president decides to run for reelection. 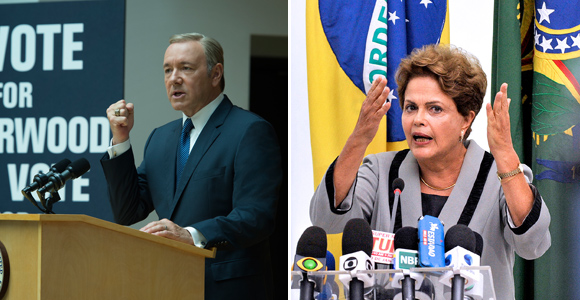 This happened in both the “House of Cards” third season and Brazil, 2014. In the Netflix series, after the resignation of President Garrett Walker, Underwood becomes chief executive. He is deeply unpopular but still prepares to run in the Democratic presidential primary. In Brazil in 2014, even amid falling approval ratings, President Dilma Rousseff launched herself into another election campaign, seeking a second term in office.

5. A politician is suspected of asking a lobbyist to pay financial support for his child (the result of an extramarital affair with a reporter). 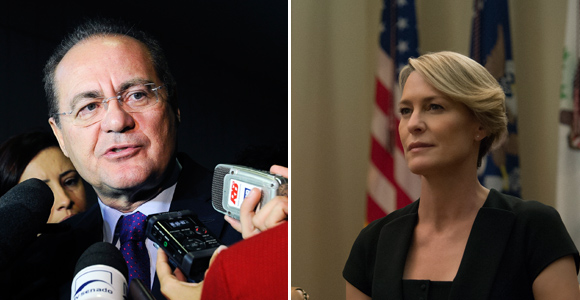 This happened in Brazil, May 2007. The politician in question is the current president of the Senate, Renan Calheiros (PMDB), who had a daughter with journalist and lover Monica Veloso. The PMDB was accused of receiving financial aid from lobbyists for construction companies, with the money used to pay alimony to Calheiros’ daughter. The case became known as “Renangate.”

6. A government member fires offenses at his party’s allies in Congress and then resigns. 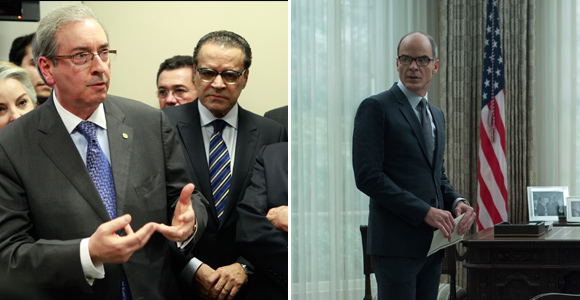 This happened in Brazil, March 2015. The protagonist is Cid Gomes. In 2015, while he held the position of Minister of Education, Gomes visited Congress and accused members of the allied base of “taking advantage” of the president and, with his finger pointed to Lower House President Eduardo Cunha, said he would rather be accused of having bad manners than being an “ailment” like him.

7. The president uses money earmarked for natural disasters to fund a jobs program. 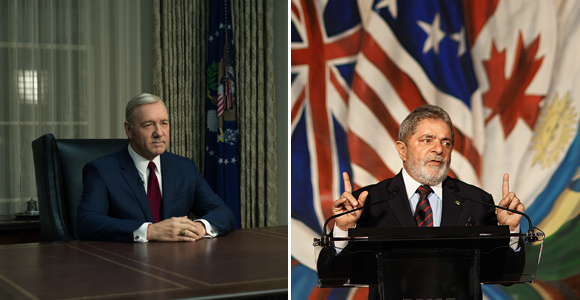 This happened in the third season of ‘House of Cards.’ Frank Underwood moves money budgeted for emergency disasters to fund his job-creating program called America Works. The president then receives news that Hurricane Faith will hit the country and he is forced to return the money.

8. An upstart politician betrays her mentor by publicizing his extramarital affair. 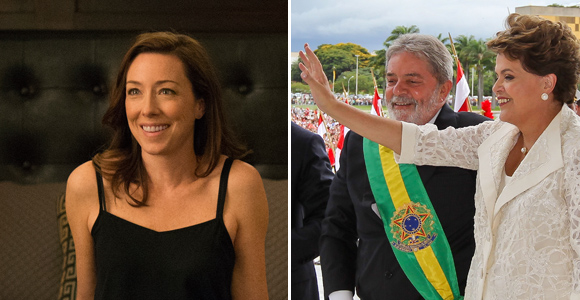 This happened in the “House of Cards” second season. To secure her position as majority whip, Jackie Sharp turns on her mentor and financial backer Congressman Ted Havemeyer by leaking information that he has a daughter, Emily, from an extramarital affair.

9. In the midst of a political crisis that threatens the executive office, the president receives a personal letter sent by the vice president. 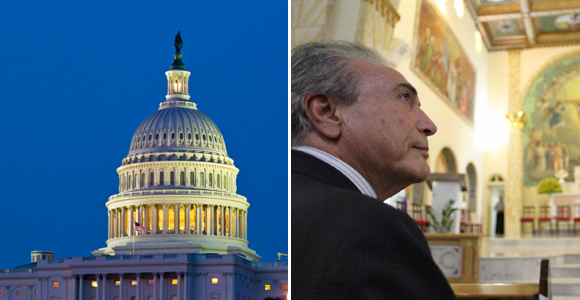 This happened in both “House of Cards” and Brazil. In the series, Vice President Frank Underwood writes a letter to President Garrett Walker to demonstrate his support. In Brazil, however, Vice President Michel Temer (PMDB) wrote a letter to Dilma Rousseff complaining of being sidelined and treated as a “decorative vice president.”

10. A journalist who hired a hacker for a political investigation is discovered and arrested. 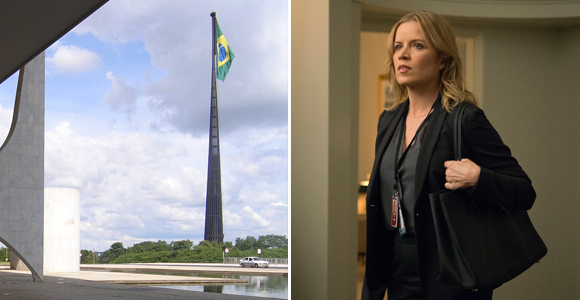 This happened in “House of Cards.” In the second season of the series, journalist Lucas Goodwin hires hacker Gavin Orsay to gain access to data that would prove who killed the reporter Zoe Barnes. However, Goodwin is fooled by Orsay and goes to jail.


Tags: Brazil, Lava Jato
Like what you've read? Subscribe to AQ for more.
Any opinions expressed in this piece do not necessarily reflect those of Americas Quarterly or its publishers.