The strongest thing about Marielle Franco was her body. The body itself, her physical representation, and everything that comes with it: her voice, skin, hair, eyes, smile, arms. And then, all that emanates from those separate parts: strength, caring, energy, sensibility, beauty, courage. And then the feelings she evoked that I don’t know how to describe.

There is a reason why in the days following her death Marielle’s face, name and body was suddenly visible on every corner: posters, graffitti, t-shirts, stickers, buttons. Everywhere, you could see videos and photos, so many photos. In Rio de Janeiro, it seemed like everyone had a photo with Marielle to share. Everyone had a story about her to tell. It was impossible to walk around the city and forget her face, impossible not to notice her name spelled in banners and signs.

And that may be what hurts the most, to see her everywhere.

I spent some of what were Marielle’s last moments alongside her, taking part in her last public event at the Casa das Pretas, a space made for the voices of black women from the favelas. My heart still hurts, and beats faster, when I think of the night of March 14, 2018.

It hurts also because of what came before that night, for my luck to have shared the microphone with her in so many talks and panels, for so many conversations, and just chats at a bar at Complexo da Maré, her birthplace that has also adopted me as a resident.

The power of the body

During her campaign for office, Marielle’s body mattered. It was the image of a black woman, a mother, a favela resident who had been fighting for so many important causes and was now pledging to take things further. After so many years working in the background as an assistant to an elected representative, putting her own face out on the streets was a daring step. She campaigned in rich neighborhoods and in favelas, in areas controlled by different factions of organized crime, always walking tall and talking to everyone with the firmness of a person with clear objectives, someone who felt free.

Marielle was elected for Rio de Janeiro’s city council in 2016 as the fifth most-voted representative. More than 46,000 votes, and this was her first time running for office. The difference between her physical body and the bodies Brazilians are accumstomed to seeing in positions of power is hard to articulate. And Marielle made sure she brought others with her, using her mandate to “blacken” the council while increasing the number of female voices.

Gender and race were at the forefront on her two years in office. It was a sight to behold, a black body that instead of being the beneficiary of state policies, was there to contribute to policymaking. Marielle used her position to help others understand that blacks aren’t a slice of Brazil’s population, but the majority and that government has an obligation to devise public policies that bring them well-being.

Mangueira, one of the most traditional samba schools in Rio de Janeiro, won the 2019 carnival competition with a song and a parade honoring anonymous heroes and retelling Brazilian history from the perspective of blacks and indigenous populations – and Marielle.

After her death, it was odd – and beautiful – to hear Marielle’s name sung within the lyrics of a samba made for the carnival parade. Samba schools traditionally tell stories from the past, but here they touched on something powerful, strong and so immediate. Any awkwardness disappeared when I connected the facts: Marielle was killed in Estácio, the neighborhood in the center of Rio where samba itself was born, and born black.

Mangueira was the champion of the 2019 contest, but in a way, it was as if we all had won. And in carnival, where so often blacks are depicted as stereotypes, we won through the power of telling our own story.

Losing Marielle brought to the fore many victories – although it hurts to even say that, and I would gladly give back all those victories if she could still be here with us. In elections last October, three black women who worked alongside Marielle were elected for office, and countless others won on the streets, using the physical presence of their bodies as a political tool. Somehow, the need to occupy the space Marielle had opened erased the hopelessness created by her assassination. It was only after her death that people realized how much it mattered to have a black female body in a city council chair.

We realize now our need to care for this precious thing that is our body. Bodies that were whipped and carry the scars of pain, to the point that it was often better to not to look, to just quash the suffering. We were supposed to hide the hair, hide the features, hide the things that made us blacker. Not now, not anymore. The more we look in the mirror and the more we recognize ourselves, the stronger we are.

We continue the work to preserve Marielle’s memory; to care for it is to care for her legacy. But the bigger fight continues to be the one for justice, that her killers be brought to justice. More important than who pulled the trigger four times, killing her and her driver Anderson, is to identify who ordered her execution.

On this first anniversary of her assassination I am thankful for each minute I had close to this extraordinary woman, and I ask the orixás that her memory and body continue to give us strength.

Councilwoman Marielle Franco left a void and is missed. A Lot! But oh how I miss Mari… How we miss her… 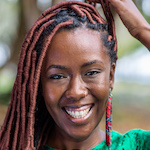 Lisboa is a journalist and presenter from Rio de Janeiro, currently based in Luanda, Angola.

Tags: Brazil, Marielle Franco
Like what you've read? Subscribe to AQ for more.
Any opinions expressed in this piece do not necessarily reflect those of Americas Quarterly or its publishers.