Throughout Latin America, countries have long sought to claim immunity from the racial and ethnic divisions that plague the rest of the world. But that is changing as several countries—including Bolivia, Colombia, Mexico, Paraguay, and Peru—have begun to recognize the diverse nature of their societies and constitutionally declare themselves as multicultural.

Most national censuses in Latin America, for example, now ask questions about whether respondents self-identify as Indigenous or Afro-descendant. A handful of countries, such as Brazil and Colombia, have gone as far as instituting race-based affirmative action programs, while Bolivia, in 2005, elected President Evo Morales who asserts his Indigenous (Aymara) identity. These changes have been largely in response to growing regional Afro-Latino and Indigenous social movements.

Race and ethnicity-based social and economic inequalities are also beginning to be recognized. As early as 1944, Alejandro Lipschutz, a Chilean anthropologist, coined the idea of Latin America as a “pigmentocracy”—where the region’s social hierarchies are ethnic or color-based. However, that idea was largely ignored until recently, when research using new census data on racial identification began to document racial inequalities. These studies generally show that Afro-descendant and Indigenous people occupy the lowest rungs on the income, educational and occupational ladders across Latin America.1

However, racial identification in Latin America—where the categories themselves are often situational, context-dependent and have fuzzy boundaries—is often more ambiguous and fluid than in the United States. Therefore, persons with the same color and physical appearance might choose to identify in distinct ethno-racial categories. Identifying along ethno-racial lines can also hide considerable physical variation. Another challenge is that varieties in skin tone among those who identify in the same ethno-racial category may lead to different socioeconomic opportunities and overall life outcomes. This means that ethno-racial identification may be inadequate for measuring the effects of race.

That is why actual skin color is used as a unit of measurement in a new study published by Vanderbilt University’s Latin American Public Opinion Project (LAPOP), “Pigmentocracy in the Americas: How is Educational Attainment Related to Skin Color?”.  To measure skin color, interviewers rated the facial skin color of each respondent according to colors on a skin color palette, which interviewers had but which they did not show to the respondent. Graphically speaking, the lightest persons are near 1 and the darkest near 11.

The study asks: To what extent are years of schooling related to skin color? We then employ a statistical analysis to ask: Do color/racial inequalities, if they exist, occur independently of social class?

Our research shows that the lightest persons generally have the highest mean educational attainment with the darkest persons having the lowest. [See figure] Thus, nearly all countries in the Americas can be described as pigmentocracies.

The most pronounced pigmentocracies are Guatemala and Bolivia, which seem to reflect the low status of their especially large Indigenous populations. However, we do not find the pigmentocratic relation in five countries. In Panama, and to a lesser extent in Costa Rica and Honduras, we discover a U-shaped relation between skin color and education. Our findings also reveal the lack of a pigmentocracy in Belize and Guyana. 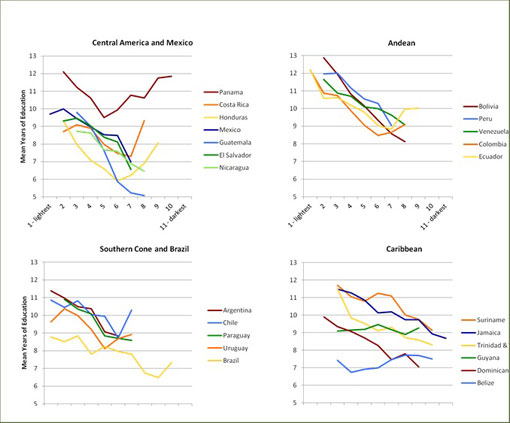 The statistical analysis shows that inequalities by skin color are not merely results of historical processes; rather, they occur independently of class origins (measured by parental occupation). This suggests that racial differences also are being reproduced in the current generation.

These findings on the importance of race run against much of the traditional thinking about social stratification south of the U.S. border. Race has been surprisingly ignored by many leading social scientists in the region, in favor of class-based explanations. However, because of their theoretical prisms or because of the unavailability of race data, analysts have rarely empirically tested whether race—especially skin color—is related to socioeconomic status in the region.

Not that class is unimportant. Race and class operate together to shape stratification in the Americas, though the effect of race has been underestimated. In addition, it is important to note that class origins are the result of accumulated racial privileges and disadvantages acquired in the past, including through formal institutions such as casta systems, slavery and other forced labor systems that Indigenous people, Afro-Latinos and mixed-race people were regularly subjected to, as well as through informal racial discrimination.

Most importantly, empirical evidence now shows the importance of color inequality throughout the Americas. Understanding this inequality is the first step for crafting better public policies to mitigate it in the future.

Access the full article, “Pigmentocracy in the Americas: How is Educational Attainment Related to Skin Color?”, on LAPOP’s website.


Tags: Education, Skin Color, Social inclusion
Like what you've read? Subscribe to AQ for more.
Any opinions expressed in this piece do not necessarily reflect those of Americas Quarterly or its publishers.