One of the protestors, Adela Muñiz, stood in the middle of the promenade dressed in a short skirt, high heels and a red blouse. Muñiz was holding a wooden cross with slogans in Spanish such as “Enough,” “No more aggressions,” and “#Marchadelasputas”—the latter denoting the hashtag on Twitter. Other demonstrators were chanting “Ni putas, ni santas—sólo mujeres” (Not sluts nor saints—just women).

The wooden cross, according to Muñiz, symbolizes women’s victimhood of verbal and physical aggression, and how that aggression has led to many dead and missing women. Events like La Marcha de las Putas are intended to convey that these assault victims should never be blamed for any act of sexual violence.

“[The pejorative word] ‘whore’ is the pretext that sexual harassers use [to commit their crimes],” said Minerva Valenzuela, a cabaret actress and organizer of the Slutwalk. “We [women] got used to thinking that we are being harassed because it is our fault. We think for example: ‘It’s my fault, I shouldn’t have worn this skirt.’”

The first Slutwalk began in Toronto, Canada, after a police representative said that—in order to avoid victimization—women should refrain from dressing like “sluts.” Valenzuela heard about the Canadian demonstration from a friend, asked that friend to blog about the topic and looked into organizing a similar event in Mexico. After registering initial support through her network of friends, an open Facebook invitation that Valenzuela initiated soon ballooned to over 10,000 participants.

A recent report by the United Nations, “The World’s Women 2010,” cites that 44 percent of Mexican women have experienced sexual violence at least once in their lifetime. This is a remarkably high figure, especially when compared to the 24 percent of women in Mozambique and 5 percent in France.

Gloria Careaga, professor of psychology at the Universidad Nacional Autónoma de México (UNAM) attributes sexual violence in Mexico to factors like inadequate public policies, pervasive machismo and impunity for the assaulters. For hate crimes, Careaga wrote via email, “there is little thoroughness in [terms of] investigation and punishment.” 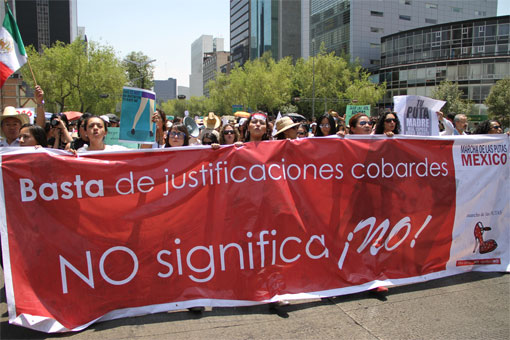 Protestors gather in the Mexican capital to unite against sexual violence in Mexico. Above, the sign reads “Enough of cowardly justifications. No means no.”

The municipality of Mexico City has acted, however, by instituting subway cars and buses specifically created for women. But although women feel somewhat safer—Valenzuela said she now can take off her sweater in the baking heat of the subway—many believe that gender segregation cannot be a permanent solution.

Amid the legislative actions and political posturing, many Mexicans are left with a permanent reminder of the dangers that sexual violence present. At the Slutwalk, Arsenio Torres had pinned a portrait of his daughter Ana to his shirt. Ana was kidnapped and assassinated in September 2009, Torres said, wiping tears from underneath his sunglasses. “It hurts because the authorities haven’t done anything.” In addition to Ana’s portrait, Torres held a poster saying: “When we were looking for her, they told us she was surely being a slut. Days later, her body was found, so they told us she was asking for it because she was a whore.”

According to Twitter, organizers are planning another Slutwalk at noon on Sunday, June 26 in the Plaza de Armas in the Mexican city of Cuernavaca.

*Isabelle Schäfer is a guest blogger to AQ  Online. She is a freelance journalist in Mexico City, graduated from Columbia University’s Graduate School of Journalism, and reported from Paris, New York, Buenos Aires, and Switzerland.