Thousands convened along the Paseo de la Reforma to participate in Mexico City’s 33rd Gay Pride Parade recently. Adorned in colorful flags and angel costumes and chanting loudly amid peals of music, people of lesbian, gay, bisexual, and transgender (LGBT) orientation marched and danced in demand of respect for sexual diversity in Mexico.

The motto this year was “Laws without Discrimination for the Whole Nation”—referring to the drive to take the progressive LGBT policies that exist in Mexico City (Distrito Federal—D.F.) and expand them across all of Mexico. In December 2009, the Asamblea Legislativa del Distrito Federal (Legislative Assembly of Mexico City) permitted gay marriage in Mexico City, making it the first city in Latin America to do so. The policy has been in effect since March 2010.

“We want the entire Mexican Republic to have all the advances that have been won in the D.F.,” said Octavio Perez, 26, of the Gay Pride Parade’s organizing committee. “That is basically the essence of the march.”

Although the Mexican capital has made venerable progress with regard to LGBT rights, homophobia within the country remains virulent. Between 1995 and 2008, the nongovernmental organization Letra S has documented 628 registered homicides connected to homophobia, as quoted by the Mexican National Commission of Human Rights. Moreover, 52 percent of Mexican lesbians, gays and bisexuals consider discrimination one of the main problems they face, according to a recent survey conducted by the National Council to Prevent Discrimination (CONAPRED). The same survey also notes that homosexuals and bisexuals admit that they encounter the most intolerance from the police and religious groups.

On the latter point, Mexico’s 2010 Census points out that 83 percent of citizens are Catholic, while 7 percent are Evangelical, Pentecostal or Christian. Given the heavily religious orientation of many Mexican, several high-level clergy in Mexico have come out vehemently against gay marriage in the D.F. For instance, Norberto Rivera, archbishop of Mexico City, has stated that same-sex marriages are “intrinsically immoral.”

“The position of the Church is that it accepts the homosexual person, but not his or her actions,” said Carlos Mendoza-Álvarez, a theologian and member of the Dominican Order. Mendoza-Álvarez, who has recently written an essay entitled “The Grace of Christ and the Homosexual Condition,” opined in an interview that churches should be more inclusive regarding the “recognition of the human dignity of homosexuals.” One of the challenges, he said, would be to turn away from the patriarchal system that tends to exclude women and LGBT people from being full members of the church.

Judith Vázquez, a catholic theologian and one of the first Mexican lesbians to have her wedding officiated in the D.F., said she studied theology partly to find out the origins of the rejection of homosexual people from a religious perspective. “It wasn’t easy,” she said, recalling being one of only a few women in her program. She revealed an anecdote when some priests wouldn’t give her the communion in front of the altar because they knew she was lesbian. For Vázquez, it is important that “other gays and lesbians receive the message of faith and hope that [she has] received”.

But ultimately, some young LGBT people decide to leave the Catholic Church entirely to find a more inclusive Christian community. Otto Cortés is one such person. Cortés, 20, participated in this year’s Gay Pride Parade as a member of “Christian Community of Hope.” He said that he had been Catholic, but that he had felt a strong feeling of rejection toward the Church. “That’s because they tried to make me believe that God hated me for being homosexual,” he said, “While I always believed in a God of love.” 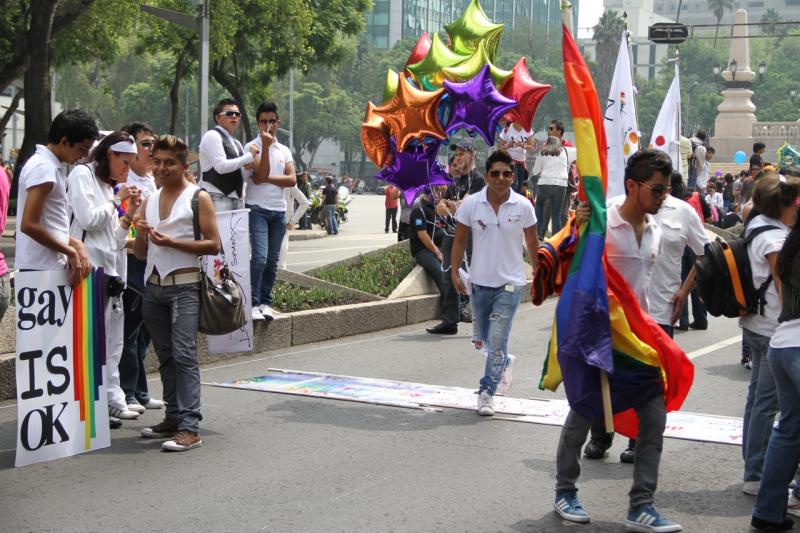 According to Mendoza-Álvarez, there are also problems within Mexican families, who often are not sensitive to the fact that family members can have different sexual orientations At the parade, Susana Torres Sanchez, 47, had a bright banner across her chest, sporting the slogan: “I love my lesbian daughter.” She said that recent generations have warmed to non-heterosexual family members, and that her daughter finds can always find support from her loved ones. A few blocks away, 18-year-old Eduardo said that he was accepted by his family for who he is; but he feels there are few who are as privileged as he. “The majority faces many difficulties,” he lamented.

But the gay pride parade was also a day of celebration within the LGBT community. Between the first gay marriage in March 2010 in the D.F. and the end of that year, 612 couples of the same sex were married in the Mexican capital, citing a municipal government statistic. One couple was over 80 years young. Progress can never be too old.

*Isabelle Schäfer is a guest blogger to AQ Online. She is a freelance journalist in Mexico City, graduated from Columbia University’s Graduate School of Journalism, and reported from Paris, New York, Buenos Aires, and Switzerland.