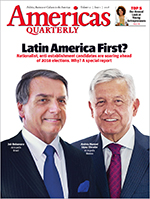 Time for a Cleanup

Corruption will be the defining issue in Latin America's 2018 elections. Anti-establishment nationalists like Jair Bolsonaro and Andrés Manuel López Obrador stand to benefit – unless more moderate candidates also embrace the cause.

System Failure: Behind the Rise of Jair Bolsonaro

By BRIAN WINTER
How a retired Army captain rose from a marginal apologist for torture and dictatorship to a serious contender for Brazil's presidency.

The Lessons of Car Wash

By RODRIGO JANOT
Can Brazil's Car Wash investigation be replicated? The attorney general who prosecuted the historic corruption case reflects on its lessons.

The Shadow Hanging Over Mexico's 2018 Elections

By MARÍA AMPARO CASAR
Widespread graft has left Mexicans fearing their political system is beyond repair. María Amparo Casar discusses corruption's reach – and how to curtail it.

Can Anyone Stop Brazil's PCC?

By JONATHAN FRANKLIN
Brazil's biggest gang has burst beyond its borders. Jonathan Franklin examines what this means for the region's already strained governments.

Ideas For a Better Latin America

The young people in our second annual survey stand out for their vision as well as their business savvy.

By KATE STEIKER-GINZBERG
This Mexican entrepreneur's alternative energy source is transforming farms across the country.

By HANAA' TAMEEZ
This Salvadoran social worker is sparking children's curiousity about reading - and the world.

By SOLEDAD DOMÍNGUEZ
At just 22, this Argentine is using 3D printers to revolutionize access to prostheses.

By BRENDAN O'BOYLE
To help her country rebuild after the 2010 earthquake, this young Haitian found she first had to break a glass ceiling.

By KATE STEIKER-GINZBERG
This former Wall Street banker found a new calling by working to democratize education in Brazil.

By NICOLAS VILLAUME
The Quechua word takanakuy means "when the blood is boiling." Photographer Nicolas Villaume explores this high Andes ritual that is as much a conflict resolution strategy as a cultural tradition and a sport.

By MAT YOUKEE
A review of Parguay's Los Buscadores, which explores one of the country's most baffling obsessions.

You Say You Want a Revolution?

By RICHARD E. FEINBERG
Richard Feinberg reviews three memoirs that look back on some of Latin America's most tumultuous chapters.

By JULIANA BARBASSA
Ana Maria wanted to refurbish her home. What she found under it changed her life – and shed light on a grim and obscured history.

By BRENDAN O'BOYLE
Celina de Sola of Glasswing International speaks to AQ about the end of TPS and what it will take to break the cycle of violence in El Salvador.

By CARLOS MESSIAS
A wave of refugee and immigrant restaurants is changing São Paulo's food landscape for the better.