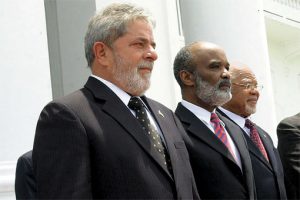 Our Man in Haiti: Bill Clinton

Since his recent appointment as United Nations Special Envoy to Haiti, former President Bill Clinton has been called, half-seriously, “president of Haiti” and “viceroy.” The lofty nicknames reflect Haitians’ belief that they have at last found a figure whose international prominence will open a new window of opportunity for this deeply troubled Caribbean nation of … Read more