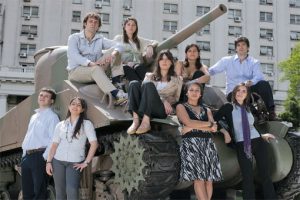 The political and ideological focus of today’s generation of Latin American youth has shifted. In the transition from military to democratic regimes, the generation of young people that came immediately afterward struggled to bridge the outdated forms of governance with the new ideas of democracy.  The rewards for their struggle came in government posts, which … Read more

For many young Latin Americans, a military career is still an attractive route to advancement. In 2006, an average of five applicants registered for each available opening in the region’s military schools. In some countries the proportions were far higher than the average: in Venezuela, the ratio was 20 to 1; and in Brazil it was 37 to 1. But even as a new generation of officers eagerly dons the uniform, the region’s new democracies have not figured out a sustainable strategy to pay for their services, or to build modern military institutions that will keep them usefully occupied.