On August 2017, the White House imposed financial sanctions on Venezuela, limiting its access to U.S. financial markets. Shortly after, Venezuela’s economy and oil sector collapsed. ​Economists Mark Weisbrot, co-director of the Center for Economic and Policy Research, and Jeffrey Sachs conclude​ ​that the sanctions caused the collapse and human suffering that followed. Is this persuasive? 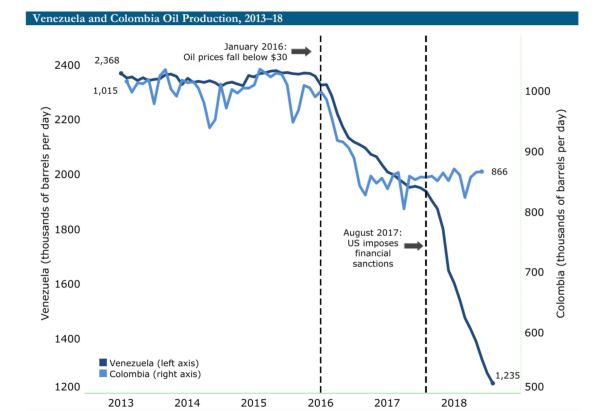 Is Colombia a good counterfactual for Venezuela, though? Not by a mile. Firstly, the oil production trends were ​anything but similar in the decade before sanctions. In fact, Colombia had an oil boom in the 2000s that was partly fueled by the 20,000 Venezuelan oil professionals that Chávez fired from PDVSA in 2003, which caused Venezuela’s production to plummet. The trends can only be made to look “similar” before sanctions by conveniently re-scaling the axes and only looking at data from 2013 onwards. 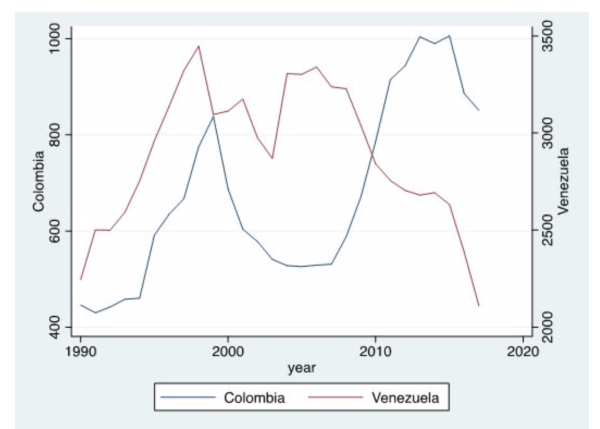 Secondly, the two countries are radically different in other dimensions. Colombia has had pro-market oil policies since the 2000s and has done well in recent years. In contrast, Venezuela has been a slow-motion train-wreck. Over the last decade, its democratic institutions have been hollowed out, the rule of law has vanished, and deepening economic distortions have resulted in an unprecedented humanitarian crisis and economic depression.

Thirdly, just a month after the financial sanctions in late 2017, Nicolas Maduro fired both the relatively technocratic PDVSA president and oil minister and replaced them with a single military general with no experience in oil​. The new CEO fired and imprisoned over 60 senior managers of the oil company including its previous president on corruption charges. Nothing remotely similar happened in Colombia, thus confounding the effects of the sanctions with those of the firing, which again makes it a bad counterfactual for Venezuela.

Fourthly, Colombia has mostly heavy oil, which makes its production sensitive to low oil prices. According to Weisbrot and Sachs, this is what makes it a good counterfactual for Venezuela. But Venezuela has a mix of light, medium and heavy crudes. Furthermore, Venezuela’s heavy crude production (run by joint ventures with foreign oil companies) has been relatively resilient. What’s collapsed disproportionately is the production of light and medium crudes, which are under direct PDVSA control. Hence the alleged similarity in the 2015 output decline is not related to heavy-oil, as Weisbrot and Sachs argue. Lastly, Colombia has very little oil left underground, barely 1.7 billion barrels, while Venezuela has over 300 billion barrels, the world’s largest oil reserves.

For all of these reasons, taking what happened in Colombia since 2017 as a counterfactual for what would have happened in Venezuela if there had been no financial sanctions makes no sense.

If instead we compare Venezuela to the rest of OPEC, a set of countries with typically large reserves more similar to Venezuela, a clear picture emerges. While Venezuela’s production fluctuated around 10% of OPEC before Chavez took over in 1999, it started a sustained decline thereafter (Figure 3), almost two decades before the sanctions, courtesy of policies that included the afore mentioned firing of 20,000 employees, the repeated expropriation of oil production and service companies, the diversion of its borrowing to non-oil activities and gross mismanagement and corruption.

Figure 3: Share of Venezuela’s Oil Production in OPEC (% of total) 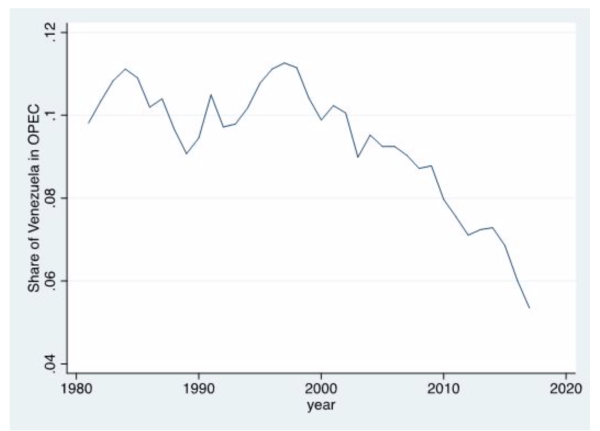 Weisbrot and Sachs also attribute rising mortality rates in 2017-2018 and the 40,000 associated deaths to the financial sanctions. This is even less serious. How do they rule out that mortality rates wouldn’t have continued rising without sanctions? How do they rule out that it wasn’t the collapse in the importation of food and medicine that pre-dated the sanctions that increased death rates? Or Venezuelan doctors leaving the country? Or government indolence and corruption? Weisbrot and Sachs don’t rule out or address any alternative explanations.

But there’s more that’s wrong with the Weisbrot and Sachs’ article. They also write that the $7 billion in debt service that was due for PDVSA in the next two years “could have been postponed with the restructuring of the PDVSA debt that was being negotiated” at the time if it hadn’t been for the financial sanctions. As a result of the sanctions, their article implies, the restructuring derailed and government had to slash imports of food and medicine to pay PDVSA’s debt, which contributed to the humanitarian crisis.

This reasoning is deeply flawed. First, when oil prices collapsed in 2014, many analysts, ​including us​, suggested that a debt restructuring was necessary and indeed desirable. But instead, the government persecuted those that sounded the alarms and instead opted to cut food and medicine imports, triggering the humanitarian crisis well in advance of the sanctions. Consequently, by the time sanctions were imposed, Venezuela had already slashed imports of food and medicine by more than 80% (Figure 4), triggering ​a humanitarian crisis that was anticipated as far back as December 2015​. Years before defaulting on bondholders, Maduro chose to default on Venezuelan stomachs. 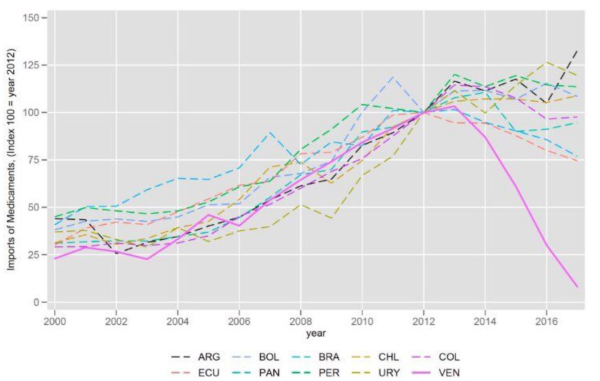 Relatedly, Venezuela was already shut out of capital markets months before the August 2017 sanctions. Three months earlier, in May 2017, the country raised almost $900 million in cash by promising to pay $2.8 billion in five years with the sale of the infamous ​hunger bonds​. The implicit interest cost of the financing was 47%. Previously, in November 2016, it had attempted to place a greatly over-collateralized bond at a 22% yield to maturity but was unable to sell the whole issue.

So, many months before the sanctions, capital markets had decided that it was too risky to lend money at anything other than an eye-gouging rate. The lack of market access had nothing to do with the financial sanctions, and the negotiations with bondholders (which were being run by a “​drug kingpin​”) were almost certainly going nowhere. Markets did not believe that Maduro was willing or able to reverse Venezuela’s decline.

In January 2019, the U.S. government ​sanctioned PDVSA​, restricting the ability of U.S. persons from having any commercial or financial relationship with the company. The sanctions were followed by a precipitous decline in oil production. Again, can we straightforwardly attribute the decline to the sanctions? No.

Most sanctions were to take effect on April 15 and yet oil production declined precipitously before that date. After all, Venezuela was able to skirt the sanctions by redirecting oil sales from the U.S. to India, China, and Russia. Instead, the national electric blackouts that recently paralyzed Venezuela are the main driver of the added decline. As seen in Figure 5, the collapse of oil production in March was fundamentally related to the two blackouts that occurred between March 7-11 and March 25-31. 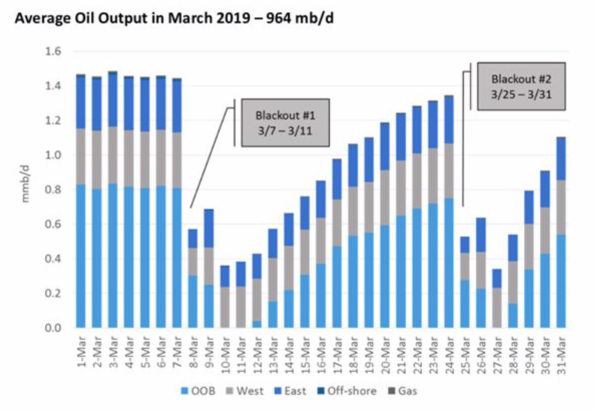 Perverse policies and extreme mismanagement explain the bulk of Venezuela’s collapse. The financial sanctions have prevented the regime from further mortgaging the future of the country. They are a means to put pressure on the regime to negotiate the return to democracy and constitutional rule. Oil sanctions are designed to restrict their access to the resources with which to continue its oppression. Nobody disputes that they will adversely affect PDVSA going forward, but they have brought Venezuela closer than ever to regime change.

It’s understandable if the authors don’t agree with the use of sanctions to pressure Venezuela’s dictatorship. It is not understandable that they would misrepresent their effects with sloppy reasoning.

Ricardo Hausmann is the director of Harvard University’s Center for International Development (CID), economics professor at Harvard’s Kennedy School and is an adviser to opposition leader Juan Guaidó. Frank Muci is a research fellow at the CID’s Growth Lab.


Tags: oil, PDVSA, Venezuela, Washington
Like what you've read? Subscribe to AQ for more.
Any opinions expressed in this piece do not necessarily reflect those of Americas Quarterly or its publishers.