Evo Morales won a popular mandate. That is the simplest way to describe the results of Bolivia’s recent presidential election. But celebrating Morales’ triumph—a landslide 63 percent victory and a ten-point improvement from 2005—should not obscure the obstacles he will face during his second term. These obstacles, both political and economic, will require deft handling and significant pragmatism. This will prove difficult, especially since expectations—particularly among the 60 percent of the population living in poverty—are unrealistically high.

The political constraints Morales faces in 2010 are not insignificant. The same constitution (approved by a referendum in January 2009) that allowed Morales to run for reelection and facilitated his party’s control of the Bolivian Senate also strengthens opponents in the so-called “Media Luna” lowland departments (which voted for autonomy in 2005). The 2009 Constitution formally recognizes “autonomous” regions and grants them significant jurisdictional powers. True, Morales’ Movement Toward Socialism (MAS) party expanded its support in these departments (even winning a majority in gas-rich Tarija). But after the April 2010 regional and municipal elections, Morales will no longer face popularly elected prefects backed by murky “civic committees.” He will face governors (the name change is not insignificant) backed by popularly elected, legitimate regional legislatures.

In the December elections, voters in Bolivia’s highland departments also backed autonomy (by 70 percent or more), as did voters in Tarija’s easternmost Gran Chaco province in their own “regional” autonomy referendum. In both cases, MAS threw its weight behind autonomy—reversing its stance in a similar 2005 referendum. The various sub-national autonomous governments are new political battlegrounds and Morales is already campaigning to build alliances with local parties and organizations (almost 500 different political organizations campaigned in the 2004 municipal elections). The reality of a “federalized” Bolivian state will make governing more difficult for any future Bolivian president, regardless of any national mandate. The cliché that “all politics is local” is true even in Bolivia. Starting in 2010, local politics will have stronger institutional frameworks. That means that Morales’ opponents will have stronger institutional support in areas where they are the local majority, even as the MAS “big tent” coalition faces greater internal pressures.

The other set of constraints are economic. Morales won a popular mandate largely because his administration delivered on key promises: the nationalization of the hydrocarbons industry and increased social spending. The global economic crunch puts that in jeopardy. Rising oil and gas prices brought in revenue for social spending such as the Juancito Pinto program—an initiative that gives every grammar and middle-school student a direct cash transfer of Bs.200 ($28.50). But slipping oil and gas prices, declining production and a global economic recession could make maintaining (and expanding) social spending difficult. 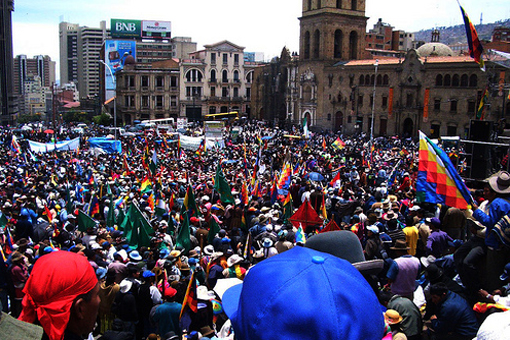 Real GDP growth has been 4 percent or higher since 2004, peaking at 6.1 percent last year. The last time GDP growth remained consistently above 4 percent was from 1993-1998, during Gonzalo Sánchez de Lozada’s first presidency. After a sharp fall in 1999, GDP growth stayed below 3 percent until 2003, the year a popular uprising forced Sánchez de Lozada to resign a year into his second presidency. After slipping in 2009 to 3.5 percent this year, economists predict growth of 4.5 percent for 2010. So far, Morales has been actively seeking to diversify Bolivia’s export markets in efforts to maintain or boost economic growth, even while reducing his country’s traditional reliance on the United States. Over the next several months and years, Morales will have to keep a close eye on economic indicators, or face the real risk of a possible popular backlash.

Washington should take solace in the fact that despite Morales’ friendship with Iran’s Mahmoud Ahmadinejad, there’s little evidence that he will deliberately take Bolivia on a self-destructive path. Morales is more pragmatic than many of his critics realize. He has publicly stated that he would continue pursuing good relationships with Brazil and Chile, regardless of who became the new president—a startling proclamation considering the possibility that both countries may have right-of-center governments next year. This suggests Morales knows that voters care more about economic results than ideology. After all, Chile and Brazil are among the strongest economies in the region—and their importance increases as Venezuela’s economy continues to falter.

All this suggests that the Bolivian president is more cautious than his equally flamboyant but more mercurial partner, Venezuela’s Hugo Chávez. Considering that Chávez is facing declining popular support at home (due in no small measure to a sluggish economy and rampant crime) and abroad (due in no small measure to his bellicose attitude toward his neighbors), Morales may emerge in 2010 as the leading figure of Latin America’s Left. But to do so he will have to tread a careful path between a more fragmented domestic political arena and a prolonged global economic downturn.


Tags: Bolivia, Evo Morales, Presidential Tem Limits
Like what you've read? Subscribe to AQ for more.
Any opinions expressed in this piece do not necessarily reflect those of Americas Quarterly or its publishers.