As a crowd gathered outside the entrance of the Summit of the America’s Hemispheric Civil Society and Social Actors Forum on Wednesday—one of four sponsored gatherings being held on the margins of the summit—a small parade of youth hoisting large Cuban and Venezuelan flags approached. Chanting revolutionary slogans such as “Viva la revolucion! Viva Cuba libre! Viva Venezuela,” they quickly forced their way to the entrance, where they were blocked by de facto bouncers attempting to sift those with badges through the chaos. “All of us or none of us, damn it!” one protester yelled.

The scene was a clear manifestation of the tension leading up to today’s summit, as Cubans from two opposing political poles—both claiming to represent the real Cuba—have flooded to Panama to be heard. Big name Cuban dissidents such as Berta Soler and Miriam Celaya headed human rights forums this week sponsored by the Foundation for Human Rights in Cuba and Florida State University-Panama. Cuban blogger Yoani Sánchez represented her new publication, 14 y medio, in the press pit—alongside Granma and other Cuban state publications. While famed Cuban musician Silvio Rodríguez inaugurated the parallel People’s Summit on Thursday, his son Silvito El Libre was slated to perform at a hip hop show sponsored by the Nation Endowment for Democracy in another part of town.

Panamanian President Juan Carlos Varela has been under fire from both sides of the Cuba divide since he invited Cuban President Raúl Castro to the summit (Castro and U.S. President Barack Obama soon after issued their historic announcement of U.S.-Cuba rapprochement on December 17).  Miami hardliners and Cuban dissidents condemned the temporary detention of dissident Rosa María Payá after she arrived at the Panama City airport, as well as the perceived legitimization of Cuba’s current government by Panama.  Meanwhile, the Cuban government and pro-Castro groups protested the reported arrival of Guillermo Fariñas—recently pictured with Luis Posada Carriles, who was involved in the 1976 bombing of the Cuban flight 455—and Félix Rodríguez, implicated in the death of Che Guevara. 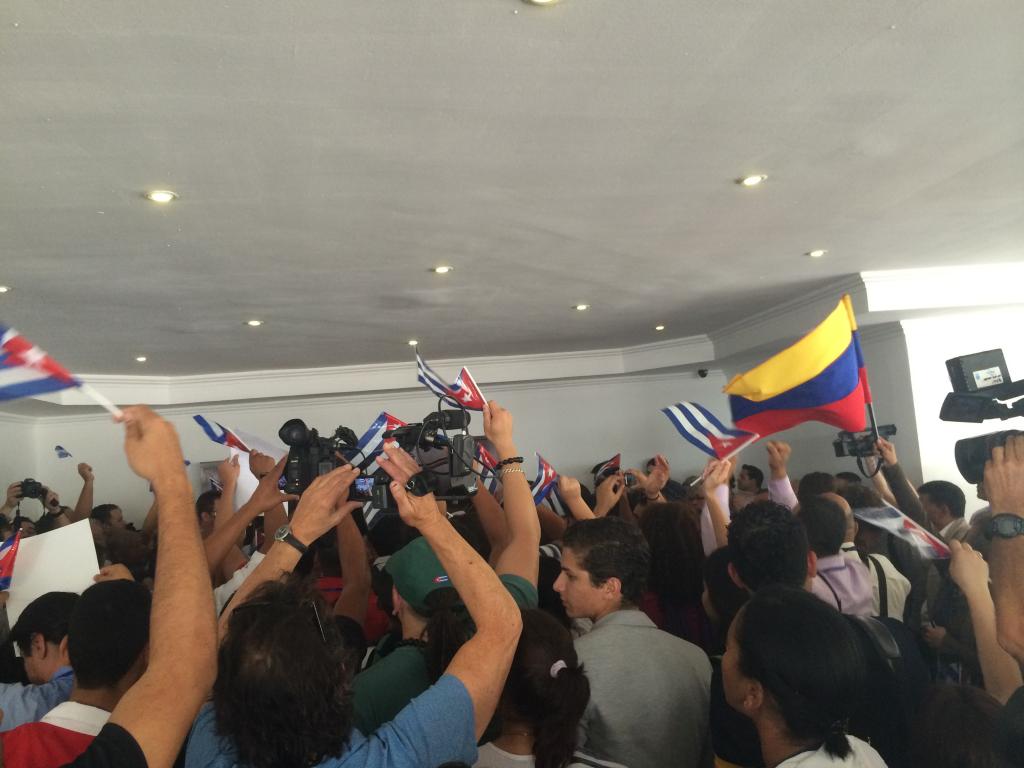 Press and protesters outside the Hemispheric Civil Society and Social Actors Forum on Wednesday. Photo courtesy of Jaime Hamre.

Cuban and Venezuelan protesters gathered outside Wednesday’s civil society forum—who identified themselves as state sector employees and community organizers—denounced what they said was the Panamanian Foreign Ministry’s favoritism toward Cuban dissidents. Liliana Núñez, president of the Antonio Núñez Jiménez Foundation for Man and Nature in Havana, said that the ministry had denied entry to 20 Cuban organizations when issuing accreditations for the forum, while anti-Castro groups—whom the protesters deemed “U.S. funded mercenaries”—allegedly received a “green light and great support.” Núñez said she considered the real Cuban civil society to be those who “know the Cuban reality” and currently live and work in Cuba, and not in Miami.

Protestors who did receive accreditations opted to boycott the civil society forum, thus limiting the interaction between the pro- and anti-Castro Cubans to parking lot theatrics, and even a brawl that led to arrests at a separate demonstration in front of the Cuban embassy.

Varela responded to the confrontations between the different Cuban factions this week, defending Panama as “a country that welcomes everyone, and [asks] for respect for everyone.” He called Wednesday’s altercation “a confrontation between Cuban brothers,” adding that “Cuba is a single people, they have deep political differences and wounds that are healing,” EFE reported.

The officials involved in these early Summit gatherings were diplomatic toward their ideological adversaries: former U.S. President Bill Clinton told the crowd at the civil society meeting that he is very glad to have Cuba participating, and Cuba’s foreign trade minister Rodrigo Malmierca Díaz encouraged U.S. business leaders at the CEO summit to approach Cubans during the events and to visit Cuba.

As the leaders of almost every nation in the Americas arrive in Panama, this opening act has set the stage for the rest of the summit—appropriately centered on the “challenge of cooperation in the Americas.” One can only hope the long-awaited U.S.-Cuba thaw will set the example for Cuba’s own internal reconciliation.

Note: this article was corrected to reflect that Guillermo Fariñas was not an ex-CIA agent. We regret the error.