As the dust slowly settles on last week’s terrorist attacks in St. Jean, Québec and the Canadian Parliament in Ottawa, it may be a good time to assess the fallout. Overall, Canadians did not panic, and responded with compassion and moderation. The Canadian media avoided the sensational, and stuck to a balanced and thoughtful coverage. … Read more

Dealing with Terrorism in North America

Author’s note: Following the Boston shooting in April 2013, I wrote about how North America would continue to face the threat of domestic terrorism. Yesterday, Canada’s Parliament was assailed by what is described as a “lone wolf” gunman. This was the second attack in a week, and Canada has lost two soldiers to the violence. … Read more

On Tuesday, the Harper Conservative government decided with its majority in the Canadian House of Commons to engage Canada in the U.S.-led mission against ISIS. In so doing, the Canadian government will carry out a mix of air strikes, surveillance, training and humanitarian aid. The mission is meant to last six months, but will be … Read more

Resisting the rush to war has been a characteristic of the Obama administration since its election in 2008.  Avoiding the Bush-Cheney approach, which led to the Iraq invasion in 2003, Obama has been criticized for indifference, detachment and sometimes weakness in dealing with international crises.  Even former Secretary of State Hillary Clinton and former Defense … Read more

The Federal Model and the U.K.

The results are in and the United Kingdom “no’s” have won a modest but decisive victory in the referendum on Scotland’s independence. The choice was clear, as proven by the sudden resignation of First Minister Alex Salmond of the Scottish National Party (SNP).  In his parting remarks, Salmond closed by saying the “dream shall never … Read more

Stakes Involved in The Scottish Choice

With only a few days left for Scottish voters to decide about their future in or out of the United Kingdom, the international media hype around Scotland’s September 18 referendum on independence has intensified.  The fact that the “yes” side—supporting Scotland’s independence from the U.K.—has narrowed the gap with the “no” side in recent polls … Read more

Yesterday, Canada’s Transportation Safety Board (TSB) concluded their investigation of the Lac-Mégantic, Quebec train derailment that occurred on July 5, 2013. According to the final report, the accident was caused by a runaway train carrying crude oil that was parked at the top of a hill for the evening, but upon its brakes failing, slid down the tracks and crashed near the center of town resulting in an … Read more 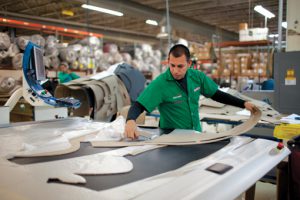 The world has changed dramatically since the North American Free Trade Agreement (NAFTA) was signed. Today, 20 years later, we live in an era of mega-regionalism. This new reality calls for a new strategic vision for North America. “Distant neighbors.” That’s how Alan Riding, then The New York Times bureau chief in Mexico, labeled the … Read more

The Quebec Factor is Back

Since the birth of Canada in 1867, Quebec has been an influential player in determining the country’s leadership. Throughout the country’s history, Quebec has played an important role in federal politics, most notably in modern times. Not only have Quebecers (Pierre Trudeau, Brian Mulroney, Jean Chrétien, and Paul Martin) occupied the seat of the Canadian … Read more

The New Buzz About Montreal

After a long and dreary winter and an unusually rainy spring, Montrealers have greeted the summer season with the Canadian Grand Prix, a series of elaborate street festivals including Jazz Fest and Just for Laughs, and the traditional national holidays of Québec and Canada. They are part of the usual rituals of summer associated with … Read more

The activities surrounding the 70th anniversary Normandy landing commemorations on June 6 displayed the tensions between western leaders and Russian President Vladimir Putin. Canada’s Prime Minister Stephen Harper avoided meeting Putin altogether, while other leaders, including President Obama, participated in the minimum photo-ops to honor the sacrifice of those who liberated Europe. Maybe it is … Read more

Montreal’s Davos and the Environment

The Future of Québec Independence

On April 7, 2014, Québec voters chose to elect a majority Liberal government, and handed the pro-independence Parti Québécois (PQ) its worst defeat ever.  Since then, speculation has surfaced about the future of the Québec independence movement. In his first post-election press conference, Québec’s new premier, Philippe Couillard, struck a positive note when he was … Read more

Québec Election 2014 and its Aftermath

After just 18 months at the head of a minority government, Québec Premier Pauline Marois went down to a stunning defeat in Québec’s April 7 elections.  The governing Parti Québécois (PQ), hoping to form a majority government and leading in the polls in early March, dropped from 54 seats to 30, and saw its popular … Read more