Lending by the Chinese Development Bank (CDB) and Export-Import Bank of China (China Ex-Im) to Latin America is larger, newer, and growing faster than its Western counterparts.  According to our research, since 2005, China has provided $75 billion in loans and credit lines to Latin American countries.  In 2010, Chinese funding exceeded the region’s combined financing from the World Bank, Inter-American Development Bank (IDB), and U.S. Export-Import Bank. In fact, China overtook the World Bank and IDB even as those banks doubled lending to the region from 2006 to 2010.

China’s emerging role as a major lender to Latin America has raised concerns regarding the competitiveness of loans from World Bank and Western export credit agencies and implications on governance and environmental initiatives. In an article for The Washington Post, journalist John Pomfret further outlined these concerns stating that “China is a master at low-ball financing, fashioning loans of billions of dollars at tiny interest rates that can stretch beyond 20 years… This has become a headache for Western competitors, especially members of the 32-nation Organization for Economic Cooperation and Development (OECD), which long ago agreed not to use financing as a competitive tool.”  Others argue that Chinese financing provides an alternative source of financing without the restrictive policy conditionalities imposed by the World Bank. Deborah Bräutigam, a professor at American University, believes that in Africa, China is filling an unmet need for energy, mining, infrastructure, transportation, and housing lending, which was all but abandoned by the World Bank decades ago.

In the midst of these debates, our report “The New Banks in Town: Chinese Finance in Latin America” released by the Inter-American Dialogue examines the volume, composition, and characteristics of Chinese lending to Latin America and the Caribbean. Our report found that lending by the CDB and China Ex-Im to the region is newer, larger, and complements lending by their Western counterparts.

Lending by Chinese banks are recent additions to the region with annual lending never exceeding $1 billion prior to 2008.  Since then, Chinese lending has skyrocketed. Over 90 percent of Chinese funding is packaged as loans of $1 billion or more in comparison to 22 percent of the World Bank’s loans.  Despite concerns about emerging competition between Chinese banks and their Western counterparts, China’s lending complements rather than competes by lending at commercial rates to different countries and sectors.

Venezuela and Ecuador received 61 percent of China’s total loans to the region, filling a gap left by sovereign debt markets. Chinese loans also concentrate in different sectors than their Western counterparts. An estimated 87 percent of Chinese loans are focused in the energy, mining, infrastructure, transportation, and housing sectors rather than the health, environment, and public administration sectors dominated by the World Bank.

Interest rates offered by the CDB and China Ex-Im are comparable to those offered by the World Bank and other export credit agencies, not the sweetheart deals claimed by some.  In fact, in side by side comparisons with the International Bank for Reconstruction and Development, the report found that the CDB’s interest rates were higher.  China Ex-Im Bank’s rates are slightly lower than the U.S. Export-Import Bank due to government development aid subsidies rather than cutthroat competition.

Chinese loans do not impose policy conditionalities, but they require stringent purchase requirements and oil sale agreements. These “strings attached” allows China to reduce risk premiums and charge their high-risk borrowers affordable rates. As energy economist Roger Tissot argues, “Chinese financing is often the ‘lender of last resort.’ It is not a cheap one, but due to the concern the international financial community has over Venezuela and Ecuador, and the large risk premiums they would charge, Chinese lending is an attractive option.”

Surprisingly, Chinese banks do operate under a set of environmental guidelines, but those guidelines are not yet on par with their Western counterparts.  European Investment Bank (EIB) President Philippe Maystadt raised these concerns, alleging that Chinese banks are stealing EIB’s projects by “undercut[ting] the conditions it imposed on labour standards and environmental protection.” With the concentration of Chinese loans in environmentally-sensitive projects, concern remains over potential environmental impacts of those projects to the region as they are implemented. 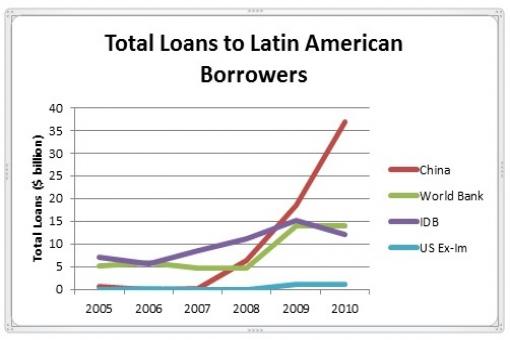 With every opportunity comes a challenge.  Latin Americans get a new source of finance that gives them better leeway to meet their own development goals.  That said the Latin Americans pay a higher premium for those loans and if they don’t use some of the finance to support macroeconomic stability, economic diversification, equality, and environmental protection this new source of finance could bring great risk.