PANAMA CITY – Raisa Banfield knew what to expect as her car pulled up to El Trapiche, a popular Panama City diner that serves local favorites like gallo pinto and fried tortillas.

“You’re going to see some angry people,” Banfield told me.

She was right. Earlier that morning, a torrent of rain and wind brought down trees, ripped the roofs off apartment buildings, and sent water coursing through the doors of El Trapiche and other storefronts along Via Argentina, one of Panama City’s main thoroughfares. The restaurant’s staff was still cleaning up when Banfield, the city’s vice mayor since 2014, arrived to view the damage.

“It was like the perfect storm,” Banfield, 49, told AQ. “But this morning fits with the climate risks we’ve warned people about.”

Perched between the Pacific Ocean, the Panama Canal and two major river basins, floods have long been part of life in Panama’s capital. But climate change has made the rainy season more violent. In addition, a boom in construction of skyscrapers and suburbs over the last 20 years — Panama City is currently home to seven of Latin America’s 10 tallest buildings — has displaced trees and soil that once provided a natural barrier to rising tides.

More: How Cities Can Adjust After Decades of Rapid Development

Banfield understands Panama City’s vulnerabilities better than most. Before becoming vice mayor she was one of Panama’s most outspoken and recognizable environmental activists. In 2012, Banfield even tied herself to a tree to stop construction of a parking lot.

“It’s sexy to be an activist: You’re always the hero,” said Banfield. “When you’re in government you have a responsibility to fix things.”

A photo of the tree-tying incident — which ultimately succeeded in stopping the project — has “become everyone’s favorite,” Banfield laughs. But it was two years earlier, as the host and producer of a TV show called Our Planet, that her path to politics started to take shape. The show highlighted Panama’s diverse natural resources — and why they needed protecting. In the U.S., Our Planet would probably have been relegated to public access television in the wee hours of the morning. In climate-conscious Panama, it was a hit. 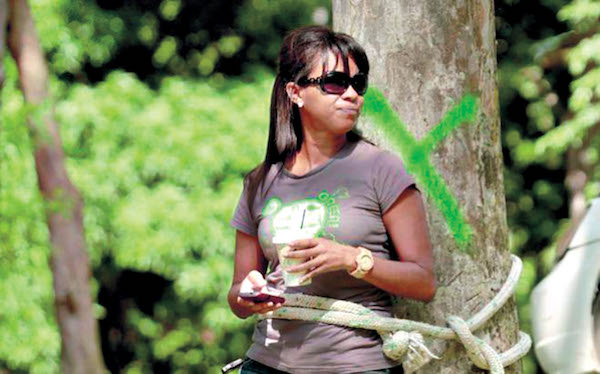 Banfield protests the construction of a Panama City parking lot in 2012.

The success of the show, as well as Banfield’s work at two sustainability-focused NGOs she founded, led politicians from across Panama’s political spectrum to seek her support. But Banfield, wary of helping one party or another claim ownership over the environment as a campaign issue, denied them all.

Her attitude changed in 2013, when, after a year of talks, she finally accepted an offer to be the running mate for José Isabel Blandón, a former legislator, in the Panama City mayoral race. The decision was unexpected: Banfield had at times been a loud critic of city governments — including one in which Blandón was an adviser — and had never before held elected office. But Blandón was offering to make sustainable development a pillar of his agenda, with Banfield in charge.

“He promised an opportunity to make concrete all the things I had been fighting for over so many years,” Banfield said. “I thought, ‘Why should I wait for someone else do this?’”

Since then, Banfield has seen how capitalinos are struggling to cope with their changing environment. In the working-class neighborhood of Juan Díaz, heavy flooding hadn’t historically been a major problem. These days, residents “don’t ask for a job or a new soccer field,” Banfield said. “They ask for help with the floods. … That has become my most important mandate.”

Her work has earned her critics. Prior to the election, then-President Ricardo Martinelli tweeted that Banfield’s rise to power would mean “the end of all construction in the city.” A year later, Martinelli was charged with wiretapping political opponents — including Banfield. He is now in jail.

Regulatory changes since Banfield took office may force developers’ hands. In 2016, the secretary of energy published a green building guide that requires some new construction to include features to limit electricity use. Next year, an ecoprotocol promoted by Banfield’s office will take effect in Panama City, providing steps to reduce the environmental impact of new construction and retrofit existing buildings to be more ecofriendly. The protocol, which will start off as a voluntary program, is based on a similar model developed by Singapore that is on track to see 80 percent of that country’s buildings considered sustainable by 2030.

New environmentally minded architectural firms are also starting to spring up. But Banfield concedes that, so far, the bulk of progress has been in making up for decades in which Panama City officials had no real diagnosis of the city’s risks — and no plan for future growth. Her focus in office has been to oversee Panama City’s master development plan, which mandates a host of public works like parks and sidewalks to help the city grow more sustainably.

Of course, having a plan and seeing it through are two separate challenges — Panama City isn’t going to turn into Singapore overnight. But small things can make the city more livable. Earlier this year, a zero trash law Banfield developed went into effect. The law imposes penalties on individuals and businesses that fail to comply with new rules for getting rid of trash, and includes educational programs to raise public consciousness around the need to recycle.

Banfield has also helped the federal government secure a $75 million grant from the Inter-American Development Bank to adapt Juan Díaz to growing climate risks. Banfield is overseeing the project’s implementation.

There’s work still to be done. In July, Banfield announced she would run for mayor in 2019, though her lack of party support — she’s still decidedly independent — suggests an uphill battle.

In the meantime, Banfield takes every opportunity to press the importance of the environment to Panama City’s long-term well-being. The evening after the storm, Banfield met with students at a local university. “The event we experienced this morning is going to happen more and more often,” she told them. “We have to be prepared.”